Joe Biden on Vaccines, Pardons and Uniting America: The 2020 TIME Person of the Year Interview

He’s not the first Person of the Year to be tasked with the future of America. Almost every U.S. President since the franchise began in 1928 has been named Person of the Year at least once (excluding Calvin Coolige, Herbert Hoover and Gerald Ford.)

But Biden is likely the first in a generation to inherit such a crescendo of catastrophes: a worsening pandemic that’s brought a staggering loss of life; widespread unemployment and an economic crisis; a global climate crisis; a reckoning over the continued pervasiveness of systemic racism; and growing misinformation blurring fact and fiction.

During an interview with TIME Editor-in-Chief and CEO Edward Felsenthal at Queen Theater in Wilmington, Del., the President-elect discussed his partnership with Harris, the coming COVID-19 vaccine rollout, his thoughts on pardons and more.

Here are excerpts from Biden’s interview, edited for clarity.

If my plan is able to be implemented—my whole economic plan—I think it’s going to go down as one of the most progressive Administrations in American history. We’ve lost the idea that when ordinary people do well, everybody does better. It’s important that we focus on the things that provide opportunity.

My Justice Department will make decisions based on the facts. They’re the people’s lawyers; they’re not my lawyers. I’m never going to pick up the phone and say, “Pardon so-and-so,” or “Go out and prosecute so-and-so.” But I lived through Gerald Ford’s pardoning of Richard Nixon. I think that the law and the circumstance should take its effect. I’m not suggesting [Trump] be prosecuted or not. But I would not be engaged in that prematurely.

How the pandemic has changed him, and us

The words of a President matter. Whether they’re good Presidents or bad, they matter. I joined the three Presidents who said they would [be publicly vaccinated] because I think people will realize we have to reinstate confidence that science is real. If someone with the reputation of [Anthony] Fauci and the leading scientists of the country said this vaccine works, they should take it.

She is straight as an arrow. She is really, really bright. She is tough. But yet she has a heart that understands what it’s like to be on the other side of prejudice. She also was an immigrant’s daughter who was raised, in a strange way, like I was. We were taught that we could be anything. Don’t give up, just move, keep pushing. And I just found her to be someone who if, in fact, something happened to me, I knew they could take over. That’s Kamala.

I got widely criticized when I first announced my candidacy [for] saying that we had to not greet Trump with a clenched fist, but with more of an open hand. That we weren’t going to respond to hate with hate. And when George Floyd [was killed], I was cautioned by some really smart people. You know, “Don’t go out and talk about racial inequity; don’t mention it because you’re gonna lose the suburbs.” My argument all along is that the American people aren’t there. The American people are not mean-spirited. They do want to see justice. They want to be united. They want to bring the country together. This is a matter of letting the air out of the balloon a little bit. I think you’re going to see a lot more cooperation than anybody thinks.

That America was better off and average Americans are better off the day we left than the day we arrived. That’s my objective.
—With reporting by Edward Felsenthal and Simmone Shah. 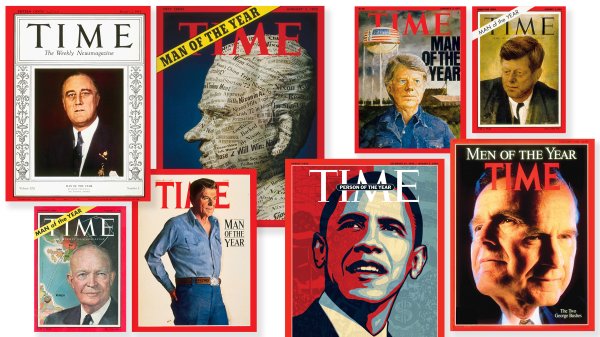 TIME’s History of President-Elects as Person of the Year
Next Up: Editor's Pick