D.C. Officials Ignored the Lessons We Learned in Charlottesville. Here Are 3 Things Leaders Should Do to Help Prevent Future Attacks

As the city’s mayor at the time, it’s particularly painful to describe the failures of government during the “Unite the Right” rally in Charlottesville in August 2017—but it’s never been more necessary.

In Charlottesville, more than 1,000 state and local police stood by as violent white supremacists invaded the city and brawled with Black Lives Matter and anti-fascist activists in the streets. The federal and state systems set up after 9/11 to gather intelligence on homeland threats failed to predict the invasion of the city by highly organized paramilitary forces. A neo-Nazi plowed his car across the unprotected pedestrian mall into a crowd of protesters, killing Heather Heyer and injuring dozens of others.

There were many lessons to be learned for how governments can better handle today’s violent events. Yet these lessons were shockingly all ignored in the insurrection in Washington. Particularly with more violence likely to come, preventing such failures from ever happening again must become our leaders’ singular focus.

In the wake of Charlottesville, we commissioned an independent investigation to find out what went wrong. I also launched a bipartisan project called Communities Overcoming Extremism to convene leaders to discuss best practices. Afterward, the Institute for Constitutional Advocacy and Protection at Georgetown University published a guidebook to help cities handle violent protests.

I’ve shared these learnings with dozens of elected officials around the country, who have successfully applied them to defuse violent events.

Prior to Charlottesville, there was violent talk on social media from both far-right and far-left activists. But none of the “open source” intelligence met the strict “credible threat” standard then required by courts and police: a specific, explicit statement of imminent unlawful acts. After the event, however, online sleuths uncovered such “credible threats” on Discord—a password-protected online gaming platform—where rally organizers described plans to use cars to attack protesters and to use flagpoles to attack people, both of which sadly happened.

The lesson is the darkest corners of the internet must be scoured prior to any violent event. Prior to the D.C. putsch, there was open planning online to “Occupy the Capital.” On 8kun, a conspiracy-theory site run by QAnon supporters, one user wrote the day before the siege, “We will storm the government buildings, kill cops, kill security guards, kill federal employees and agents, and demand a recount.”

It is simply unforgivable that this lesson of Charlottesville was ignored by those in charge.

A second lesson is for authorities to prepare and rehearse a security plan that will separate antagonists.

In Charlottesville, the security plan was so flawed that police riot gear was stationed blocks away, so when the rioting began, the police needed to retreat to get the protection they required. Far-left and far-right protesters were allowed to park together, and to mix, mingle, and clash at the site together.

Worse, the authorities were not on the same page. In Charlottesville, we have a confusing “city manager” form of government, where the mayor is primarily ceremonial, with no role in policing, and overlapping jurisdictions with Albemarle County and the University of Virginia. Not only did these different players fail to adopt the best practice of “table-topping” (where leaders sit around a table and rehearse their various roles in a plan), they literally were not even on the same radio channels during the rally.

A confidential DHS memorandum distributed four days before the rally, titled “Domestic Terrorist Violence at Lawfully Permitted White Supremacist Rallies Likely to Continue,” but key city leaders (including me) never knew about it.

There was a haunting echo of that DHS memorandum during the siege of the Capitol. A senior FBI official initially said, “investigators have not found that there was an organized plot to access the Capitol.” But then it emerged that an anonymous official in the agency’s Norfolk office had written a “situational information report” the day before the siege, describing the agency’s knowledge of “specific calls for violence,” including the statement, “Stop calling this a march, or rally, or a protest. Go there ready for war. We get our President or we die. NOTHING else will achieve this goal.”

This was part and parcel of an unacceptable lack of preparation and confusion.

Members of the National Guard form a perimeter around the Capitol in Washington, on Jan. 11, 2020.
Gabriella Demczuk for TIME

The New York Times reports that Mayor Muriel Bowser, seeking to avoid the overly militarized federal presence that met last year’s Black Lives Matter protests, sent a letter warning against excessive deployments. But she was herself a victim of the Justice Department’s conclusion that the event would be relatively peaceful.

At the federal level, the intent was more nefarious. In D.C., a federal protectorate, the President is effectively the governor. And President Trump saw the insurrectionists as his self-described “Trump Army” (the term used in his own fundraising emails). No surprise then that not only was there no security plan to protect the Capitol from his personal paramilitary, once the siege was underway, former Chief of Capitol Police Steven Sund says he was rebuffed six times in his requests that the National Guard deploy. According to The Washington Post, it took six hours for Trump to “begrudgingly” urge his supporters to “go home in peace.”

Such malfeasance must never be allowed again—a key reason Congress should impeach and convict Trump.

The third lesson from Charlottesville is about the law itself. We always must balance public safety and free speech; you can’t yell “fire” in a crowded theater. However, inflexible interpretations of the First Amendment tied our hands in Charlottesville. After being informed by our police that the intelligence would not meet the “credible threat” standard to cancel the permit, we attempted instead to relocate the “Unite the Right” rally to a safer location. We were then sued by the ACLU, and a federal judge ruled against us on First Amendment grounds.

Now, too, we are hearing George Washington University law professor Jonathan Turley argue that Trump’s inciting speech before the rally, during which he instructed the mob to “stop the steal,” was protected free speech. But under America’s “common-law” system, the law evolves to fit the country’s needs. After the devastating failure in Charlottesville of the rigid, traditional approach, the Virginia Supreme Court last year adapted, allowing Governor Ralph Northam to ban firearms at a massive, potentially dangerous Second Amendment rally, deferring to his emergency powers over a state law preventing such a ban.

That was the right call—and should be a hallmark for officials and courts seeking to better balance public safety and free speech going forward.

We know more violence is being planned as we speak leading up to the inauguration in Washington and in all 50 state capitols. Recent reports show encrypted channels are already being used to plan for bombs and assassinations.

Charlottesville did give us one gift: knowledge. As the ancient playwright Aeschylus wrote, “Wisdom comes alone through suffering.” We must now apply this hard-earned wisdom to give our authorities the firm upper hand to protect our democracy from those who would attack it. 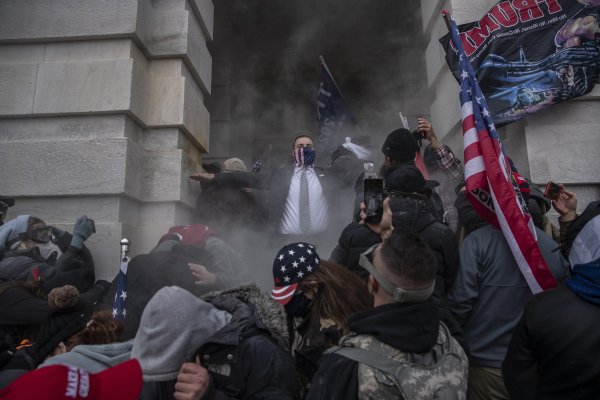 Trumpism Is the Republican Party Now
Next Up: Editor's Pick