This Time, Impeachment Seems to Be a No-Brainer for Democrats

The last time House Democrats moved on impeaching President Donald Trump, it took 44 days for a whistleblower complaint to become a House investigation, and another 78 days to unveil the articles of impeachment that would pass three days later.

As Trump faces down another impeachment in the House, the timeline from alarm bell to vote could be a whiplash-inducing seven days. For anyone who says the government is inefficient and cumbersome, the speed at which a determined House Speaker Nancy Pelosi is working makes a good counterpoint. “The president’s threat to America is urgent, and so too will be our action,” Pelosi said Monday.

Democrats are expected to vote today to give Vice President Mike Pence another 24 hours to step in to rally Trump’s Cabinet against him and remove him from power using the 25th Amendment. If that doesn’t work — and so far there are no outward signs from the White House to indicate that it will — Democrats are expected to make history on Wednesday and give Trump a distinction no other President has seen: a second impeachment.

The 11th-hour maneuvering to limit Trump’s ability to roil the world with seven days left in power signals just how worried Washington is right now. Pelosi has asked the Chairman of the Joint Chiefs of Staff — the nation’s highest military officer — what can be done to keep the nuclear codes out of Trump’s hands. (The answer, my TIME colleague W.J. Hennigan reports, is nothing.) Social media companies have expelled Trump from the platforms he used to inspire last week’s insurrection. Some of Trump’s fellow Republicans — but not enough to matter — have said it’s time for Trump to leave before his term ends next Wednesday.

It’s been one week since Trump riled up his supporters at a rally in the shadow of the Washington Monument and urged them to march to the Capitol. Once there, some broke through the security lines, overwhelmed the police and forced lawmakers to flee. They ransacked offices, looted with impunity and attempted an insurrection to negate the results of Nov. 3’s elections that President-elect Joe Biden won. Lawmakers barricaded themselves inside offices, bunkers and laid on the floors of the House and Senate.

It’s a dramatically different atmosphere from the last time lawmakers considered the I-word. A little more than a year ago, the issue was Trump’s linking of U.S. security-aid dollars to Ukraine with an investigation into Biden’s family members. It was a convoluted case of quid pro quo — and ultimately insufficient to shake the Republicans’ fealty to Trump. (In yesterday’s newsletter, we covered why the GOP is still with Trump.)

The kindling now is much easier to explain: On Jan. 6, Trump urged his supporters to riot at the Capitol to pester lawmakers. Some insurrectionists were armed. Others had plastic handcuffs, suggesting the noose fashioned from TV cords nearby might have been more than a prop. The House’s impeachment resolution — just four pages, compared to last year’s nine — calls on a single indictment against Trump for “inciting violence against the government of the United States.”

Today, speaking to reporters at the foot of Air Force One, Trump refused to accept any responsibility for the riot and instead said Congress was inspiring anger as it moved quickly. “People thought what I said was totally appropriate,” Trump said, before blaming riots on racial justice protests from the summer.

The speed is, in part, because Trump’s days are limited. Although there is precedent for impeachment after a person leaves office, it would not be as politically satisfying. The House, for instance, impeached former Secretary of War William Belknap after his resignation. (The Senate, however, did not convict.)

Just as important a factor may be the public response to the riot. Throughout the process for the first impeachment, Democratic support for removing Trump started at around 79% and climbed to a high of about 87%, according to FiveThirtyEight’s polling model. This week, Quinnipiac found Democratic support at 89%.

Perhaps more importantly, those who don’t align with either party appear to be on board with Democrats’ efforts. During Round One, independent voters consistently lagged in enthusiasm for impeachment behind the general population. Although the polling sets are limited — it has, after all, only been a week since teargas filled the Capitol Rotunda — they seem to show independent voters are more keen on removing Trump than most voters.

In November, voters punished Democrats and cut their majority in the House in a surprise move. A study is still ongoing as to why, but there are some who believe impeachment hurt the party — although there is just as a compelling case that non-specific calls to “defund the police” and an embrace of the vague Green New Deal agenda did more damage.

It will be another two years before voters get to weigh in on Congress’ conduct. Trump will not be an incumbent on the ballot. And fear of Trump may, ever so slightly, dissipate in some corners of the GOP by November 2022. The last week has shocked America and the world. And with Trump heading to the exit no matter what, this may be the time to harness a rare efficiency and give future historians a turning point for this story. 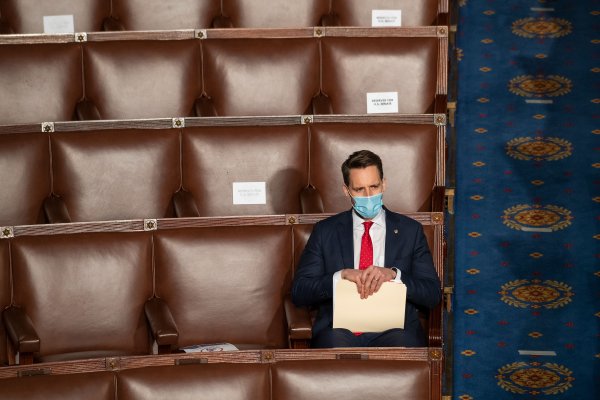 In the Long Game, Even Insurrection May Not Disqualify Presidential Hopes
Next Up: Editor's Pick