What Impeachment Won't Change: How the GOP Became the Party of Trump Over Several Decades

Ideas
By Julian E. Zelizer
Zelizer is a political historian at Princeton University. He is the author of a new book, Burning Down the House: Newt Gingrich, the Fall of a Speaker and the Rise of the New Republican Party.

The modern Republican Party doesn’t end on January 20, 2021. The grand finale of Donald J. Trump’s tumultuous presidency won’t fundamentally change the nature of the GOP. While many Republicans were shocked and scared by how far out of control the situation became during the insurrection on January 6, that horrible moment in our democracy has been building for decades. Indeed, even after authorities were able to clear Capitol Hill, some Senate Republicans continued to challenge the election results—the animating issue that had driven the rioters who flooded into D.C.

The Trump presidency was a product, not the cause, of the new Republican Party. President Trump’s success was only possible because of the transformation that the party underwent since the 1980s. So deeply rooted is the dysfunction that shapes the GOP that even the shock and awe of a presidentially incited mob storming Capitol Hill won’t fundamentally shift what the party is all about.

If there is one idea that is most useful in assessing our current situation it is the concept of “asymmetric polarization.” This argument has been developed by political scientists and journalists covering contemporary politics. Asymmetric polarization stipulates that political polarization does not explain what has happened in Washington since the 1960s. While it is true that Democrats and Republicans have moved further apart, with the number of moderates having vastly diminished, the GOP has become much more radicalized than the Democrats. As a whole, Republicans have shifted further to the right than Democrats, as a whole, have moved to the left. Just as important, Republicans have embraced a much more extreme approach to partisan warfare, proving more willing to damage institutions and shatter norms than their opponents. Democrats come prepared for a pillow fight, as Trump’s advisor Steve Bannon argued, Republicans for the head wound.

The shift within the GOP began during Ronald Reagan’s presidency. The locus of change was not the Oval Office but Capitol Hill. There, a cohort of young Republicans flocked to the leadership of Georgia Congressman Newt Gingrich, who blazed a path for the party that privileged partisan power over the demands of governance or the health of our democratic institutions. Promoting a vision of populist, anti-establishment politics, Gingrich persuaded fellow Republicans that all was fair when it came to bringing down the Democrats. In a series of high-takes battles during the 1980s, Gingrich used the floor of the House to unleash toxic rhetoric about Democrats and their concerns for national security and he brought down Speaker of the House Jim Wright by criminalizing his reputation as “the most corrupt Speaker in American history.” Rather than distancing themselves from his tactics, as Republicans attempted to do with Joe McCarthy in the 1950s, they voted him into a leadership position in 1989, as House Minority Whip.

Ultimately, Republicans took control of Congress in the 1994 midterms and made Gingrich their Speaker. With endless investigations of President Clinton and two major government shutdowns, Speaker Gingrich institutionalized his smash-mouth partisanship at the highest levels of congressional power, culminating with the impeachment of President Clinton for perjuring himself about a sexual affair with White House intern Monica Lewinsky. In the realm of political campaigns, Gingrich was joined by figures such as Lee Atwater and Roger Ailes who promoted vicious take-down politics that involved race-baiting and character assassination.

The new Republican Party also built a foundation in the news media. After the Federal Communications Committee abandoned the Fairness Doctrine in 1987, a rule which required radio and television shows to present both sides of a political issue, there was a massive proliferation of conservative talk radio between 1988 and 1994. Right-wing hosts such as Bob Grant and Rush Limbaugh filled the airs with poisonous tirades—in dialogue with angry callers—about the dangers of “politically correct” and unpatriotic liberals who were destroying the country. During Clinton’s presidency, the airwaves veered into conspiratorial directions with false allegations that the president and First Lady had been involved in the murder of Vince Foster, a top aide and friend who had committed suicide. The conservative media gained new muscle in 1996 when Rupert Murdoch brought conservative operative Roger Ailes on board to run his new Fox News channel. The station, while promising to be “fair and balanced,” emerged as a clearinghouse for polemical hosts who went to war with liberalism and touted the virtues of Republicanism by airing sensational stories and conspiratorial claims about what Democrats were up to.

Essential to the process of radicalization was that the entire Republican coalition would be comfortable as extremism took hold. President George W. Bush helped ensure this bargain by strengthening the policies that almost every Republican wanted, enough that the emerging right-wing forces would not scare anyone away. The Bush administration, working with congressional Republicans, delivered big on key items in the conservative agenda. The president moved forward in aggressive fashion with conservative court appointments nurtured by the Federalist Society. He pushed for restrictions on reproductive rights and limited scientific research that angered the Religious Right. The president obtained two major supply side tax cuts and dismantled key regulations, trafficking in disinformation about issues such as climate change to achieve his goals.

After 9/11, the White House undertook a massive expansion of executive-based national security programs, including torture and war against Iraq. President Bush ran up against the way that his party was veering sharply to the right on social and cultural question, such as when nativist forces in the GOP stifled a grand bargain on immigration, but his delivering so many core domestic policies kept the entire coalition comfortable. In 2008, Republican candidate Senator John McCain tried to pull back as his vice-presidential pick, Alaska Governor Sarah Palin, galvanized these forces. At her rallies, supporters would yell out “Terrorist!” and “Kill Him!” when Obama was mentioned. The “lamestream media” was one her favorite targets.

The radicalization of the Republican Party entered a new phase after Barack Obama’s inauguration in January 2009. The new generation of Republicans, many of whom had come of age during the Gingrich era, went after the new president hammer and tong. In the Senate, Kentucky Senator Mitch McConnell mobilized his caucus to obstruct the new president at every turn. Everything was fair game under Senator McConnell, even refusing to participate in an economic stimulus bill in the middle of a massive recession or refusing to fill a Supreme Court vacancy toward the end of his term.

The 2010 midterms brought in a second generation of Gingrich Republicans into the House of Representatives, a fiery group that called themselves the Tea Party and who were willing to do anything to represent the causes of the right. When President Obama wouldn’t agree to a draconian budget, the Tea Party went to the political mat by threatening to not raise the debt ceiling—an action which would have sent the country into default. Starting in 2011,, the party took a deep dive into extremism with the Birther movement—challenging the legitimacy of Obama’s presidency with false claims that Obama wasn’t born in this country. It was through Birtherism that Trump emerged on the national political stage.

The dynamic only accelerated. By the time Trump announced that he was running for president, what many in the pundit class didn’t understand was that Florida Governor Jeb Bush no longer represented the party “establishment.” Trump did. It was because of how radicalized the party had become that GOP support grew so fast and remained so strong for him regardless of what he did or how much instability he brought to the White house. Other than trade, Trump stuck very closely to the party line on most key issues, such as deregulation and tax cuts as well as immigration. He used his Twitter feed as an public hot line to far-right groups that had surfaced in the past decades and found platforms in the conservative media. The party had come off the rails, but it had been a long-time coming.

Republicans won’t change anytime soon. They can’t. This is what the party is. In order to enter a new era, the party has to do much more than move beyond Trump. They need a new generation of leaders who reject the style of partisanship that has shaped the party and they need to create a wall against extremist organizations. Until that happens Trumpism will live on—not because of his hold on the party but because of what the party had become long before he came to town. 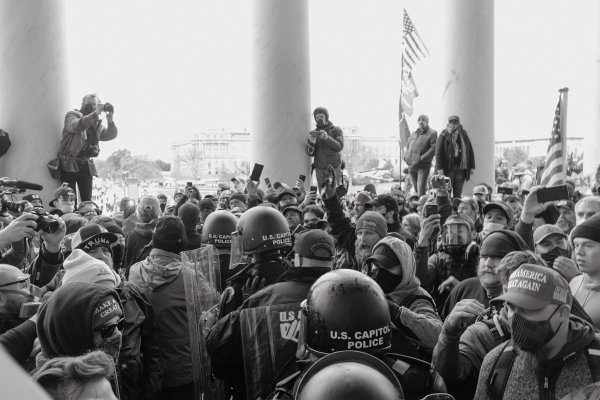 The U.S. Capitol Attacks Show That Our Focus Must Be On Eradicating White Supremacism
Next Up: Editor's Pick