Why Joe Biden Should Help the Rohingya People of Myanmar

A large group of Rohingya people, fled from ongoing military operations in Myanmar's Rakhine state, try to cross the border at Palongkhalii, Cox's Bazar, Bangladesh, on October 17, 2017.
Stringer/Anadolu Agency/Getty Images
Ideas
By Matthew Smith and Andrew Riley
Matthew Smith is CEO and co-founder of Fortify Rights and a Fellow at the Carr Center for Human Rights Policy at the Harvard Kennedy School. Follow him on Twitter @matthewfsmith.
Andrew Riley is a consultant to Fortify Rights and was the principal author of “The Torture in My Mind”: The Right to Mental Health for Rohingya Survivors of Genocide in Bangladesh and Myanmar. Follow him on Twitter @andrewkyleriley.

When the Myanmar Army attacked and massacred ethnic Rohingya civilians in 2017, more than 700,000 men, women, and children fled to Bangladesh, some riddled with bullets, burns, and gaping wounds. Hundreds of villages were in ashes, razed by soldiers and their civilian proxies.

But long after the physical wounds scarred over, Rohingya continue to suffer mental harm on a massive scale. President-elect Biden can and should do something about it.

There are upwards of one million Rohingya refugees now languishing in Bangladesh. They are experiencing trauma, depression, and anxiety at staggering rates. The World Health Organization estimates that approximately 15 to 20 percent of adults will experience some type of moderate or mild mental health disorder one year after an emergency, and in theory, those figures should decrease over time. By contrast, a new report published by Fortify Rights finds that 89 percent of Rohingya refugees in sprawling camps in Bangladesh are experiencing serious depression. Eighty-four percent are experiencing severe emotional distress. And a staggering 62 percent are experiencing symptoms equivalent to Post-Traumatic Stress Disorder—a debilitating condition that can prevent its victims from leading normal and constructive lives.

What drives these extreme levels of distress?

Ongoing genocide in Myanmar is partly to blame, but the new quantitative data reveals that long-term systematic human rights violations in Myanmar and ongoing impunity are also key factors that continue to impact Rohingya mental health.

Read more: The Exodus of the Stateless

This may seem obvious, but it’s not. The study of trauma typically focuses on the effects of singular traumatic events: witnessing an accident, the death of a loved one, or surviving a violent attack, for example. But none of the existing mental health studies focusing on refugees have accounted for the role of long-term, systematic human rights violations on mental health outcomes.

For decades, Rohingya in Myanmar have experienced extreme, draconian restrictions on everything from freedom of movement to health care, practicing their religion, childbirth, and even identifying as Rohingya. The Fortify Rights data—collected with a trained team of Rohingya researchers—also reveals that the community has survived exceedingly high rates of violence, including torture, stabbings, beatings, shootings, and sexual assault.

What’s more, the violence, restrictions, and impunity continue unmitigated in Myanmar. Rohingya know that better than anyone, and it stalks them.

People hold banners as they stage a demonstration near the U.S. Capitol building on August 25, 2018, in Washington, United States, to protest against massacres carried out by the Myanmar military against Rohingya
Yasin Ozturk/Anadolu Agency/Getty Images

The restoration of rights for the Rohingya

Thankfully, the Trump Administration has not been blind to this crisis. Secretaries of State Tillerson and Pompeo were both outspoken about the need for justice for Rohingya, and Vice President Pence gave Myanmar’s State Counsellor Suu Kyi an earful at a regional summit in Singapore in 2018, telling her that the “violence and persecution by military and vigilantes” against Rohingya in 2017 was “without excuse.”

The U.S. has also been the largest humanitarian donor to the Rohingya people by a long shot. The State Department has spent nearly $1.2 billion to alleviate the humanitarian needs of the Rohingya in Bangladesh and Myanmar since 2017, including $200 million in new funding in 2020 alone.

To its credit, the U.S. government also sanctioned Senior General Min Aung Hlaing and other top Myanmar generals for their roles in the atrocities. Former Secretary Tillerson backed a resolution at the U.N. Human Rights Council that created a crucial U.N. Fact-Finding Mission (FFM) to investigate atrocities in Myanmar. (Shortly after, Trump foolishly withdrew the U.S. from that body and later fired Tillerson via Twitter).

In a report of more than 400 pages published in September 2018, the FFM ultimately determined the situation in Myanmar to be a genocide, as did Fortify Rights in July that same year. Those findings, in part, led The Gambia to file an historic genocide case against Myanmar at the International Court of Justice (ICJ) in November 2019. That trial is ongoing.

Nevertheless, much remains to be done. And from the Oval Office, President Biden will be in a prime position to help.

The Biden administration should do what President Trump and Secretary Pompeo failed to do: act swiftly to formally designate the violations against Rohingya as genocide and crimes against humanity. Evidence already collected by the State Department points to those crimes, and such a designation would support ongoing international accountability efforts, including the case at the ICJ, which Democrat and Republican members of Congress have highlighted as a priority.

Biden should also make plans to use American and multilateral leverage to persuade China to holster its permanent veto on the U.N. Security Council with regard to Myanmar. This would enable the heretofore inactive body to refer the situation in Myanmar to the International Criminal Court (ICC), as it should. The Prosecutor at the ICC already has jurisdiction to investigate the forced deportation of Rohingya as a crime against humanity, but the court should be empowered to investigate all manner of atrocities in Myanmar, and without a referral, it can’t do that.

The Trump Administration not only failed to engage the Security Council on the ICC option for Rohingya but took the absurd action in September of sanctioning prosecutors at the court. Once in office, Biden should drop those sanctions as a matter of priority, ratify the Rome Statute to enlist the U.S. in the court, and help ensure the court can prosecute the international crimes that continue against numerous ethnic nationalities in Myanmar, including the Arakanese, Kachin, Shan, and others. International justice is not a silver bullet—it is slow, expensive, and flawed—but it remains a crucial piece of the puzzle in preventing genocide and other atrocities.

Ultimately, the restoration of rights for Rohingya will come from democratic forces within Myanmar, including the Rohingya people. The Biden Administration should redouble support for human rights defenders in the country and hinge engagement with Myanmar on clear benchmarks for progress, including the restoration of full citizenship rights for Rohingya.

The longer the Rohingya genocide grinds on, the more problems it will create for international peace and security. It demands attention with an urgency that transcends party lines. 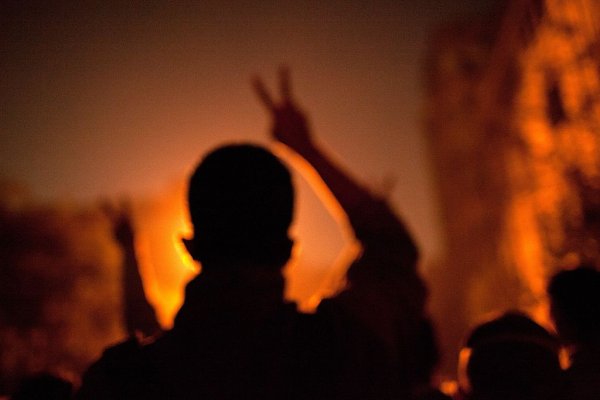 Why the Arab Spring Failed—And Why It May Yet Succeed
Next Up: Editor's Pick