Buddhist monks protest against a visit to Myanmar by a high-level delegation from the Organization of Islamic Cooperation (OIC), in Yangon in November 2013. The clergy play a leading role in stoking anti-Muslim feeling.
Soe Zeya Tun—Reuters
By Charlie Campbell

One year on, thousands remain homeless and animosity is entrenched. “It is not stable, and conditions are still very dangerous,” says Aung Thein, a 51-year-old Muslim lawyer in Meiktila, a central Burmese town of 100,000 people, where at least five mosques and more than 800 homes were razed to the ground. “Extremists use hate speech every day, and Muslims are not safe.”

Adding to this already fraught picture, new legislation threatens to isolate the Muslims further. Proposed regulations will restrict religious conversions, make it illegal for Buddhist women to marry Muslim men, place limits on the number of children Muslims can have and outlaw polygamy, which is permitted in Islam.

More than 1.3 million signatures have reportedly been gathered in support of this plan, which is spearheaded by a group of extremist Buddhist monks and their lay supporters. The proposals were forwarded by reformist President Thein Sein to lower-house speaker Shwe Mann late last month, and have now been submitted to relevant ministries to be drafted as bills. They have been dubbed an “intolerance package” by Phil Robertson, deputy Asia director for Human Rights Watch, who says they would be a “recipe for disaster for a multicultural, multireligious country like Burma.”

As part of the marriage proposal, those of other religions must convert to Buddhism before marrying a Buddhist and seek written consent of the bride’s parents. (The consent of the groom’s parents is not required, for it is assumed the non-Buddhist party is always the groom.) Any non-Buddhist who ignores the regulations will be hit with a 10-year prison sentence and confiscation of property.

The proposals are merely the latest incarnation of spiraling religious extremism that has gripped Burma (officially known as Myanmar) since quasi-democratic rule was introduced in 2010. In June 2012, pogroms against the heavily persecuted Rohingya Muslim minority in the country’s far western Arakan state led to more than 280 deaths. Even today, some 140,000 Rohingya languish in squalid displacement camps, where they struggle to receive medical care or sufficient food.

The government maintains the fiction that the Rohingya are illegal immigrants from neighboring Bangladesh — when, in fact, they have lived in Burma for generations — and so has painted the carnage as antimigrant in nature, with Buddhist Burmese merely resisting land grabs from Muslim interlopers. However, the violence that erupted in Meiktila last March — spreading to Shan state and even parts of Rangoon, the former capital and biggest city — did not involve the Rohingya, and therefore suggests that religion rather than supposed land scarcity is fostering this simmering acrimony.

An extremist Buddhist movement known as 969, led by the charismatic monk Wirathu, has been gathering steam in recent years, and portrays Burma’s Muslim population as intent on conquering the nation through rampant propagation. The group’s hate-filled rhetoric speaks of “protecting” Burmese women, and it has led to calls for the boycotting of Muslim businesses. Naturally, it enthusiastically champions the proposed discriminatory legislation.

“We found on the ground in almost every township that there are [Buddhist] women who were forced to convert to another religion,” Wirathu told the Irrawaddy in January. “We need to have an interfaith-marriage law to protect them.”

Ashin Gambira, a former monk who spent four years as a political prisoner after fronting the 2007 pro-democracy Saffron Revolution, believes Wirathu is being used as a political tool. “The Burmese government is always trying to cause unrest among the Burmese people,” he says. “The government supports and donates money to 969.”

Robertson says anti-Islamic feeling must be seen in light of elections in 2015, in the run-up to which various elements “are trying to whip up divisive sentiment to garner support, which is really dangerous and ill advised.”

Tellingly, when Thein Sein told the U.N. that the Rohingya would not be given citizenship and should be deported, his popularity soared and crowds waved banners extolling his steadfastness — adulation previously inconceivable for a former junta general. Presenting himself as the only feasible foil to Islamization would appear to be a naked political ploy on Thein Sein’s part, with his military-backed Union Solidarity and Development Party preparing to face off at the ballot box with the National League for Democracy (NLD) of Nobel Peace Prize laureate Aung San Suu Kyi.

Compounding matters, a new national census is about to begin, run by the U.N. Population Fund and the Naypyidaw government at a cost of some $75 million. The last official census in 1983 put the Muslim population at 4% of the total, although the many mosques and madrasahs to be found in virtually every Burmese urban center indicate this is a significant underestimate. (Experts suggest 10%.)

Unfortunately, the sectarian turmoil “could intensify if the results of the 2014 census shows non-Buddhist populations have markedly expanded since the last national census was held in 1983,” writes professor emeritus of Asian Studies at Georgetown University David I. Steinberg in the Asia Times. Such evidence would naturally bolster extremist arguments that social and population curbs on Muslims are needed.

Unfortunately, not even Suu Kyi — a human-rights icon after spending 15 years as a political prisoner — appears brave enough to speak out against the proposed legislation or to confront extremist elements. To do so would be political suicide. Last month, the NLD canceled a party meeting at the behest of a group of monks. The reason? Two of the four speakers were Muslim. 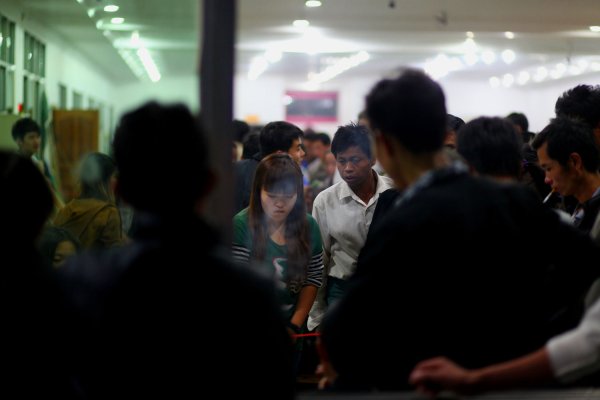 Burma's 'Wild East' Is a Debauched Land of Drugs and Vice That Reforms Forgot
Next Up: Editor's Pick