The U.K. government will end taxpayer-funded support for fossil fuel projects in other countries, Prime Minister Boris Johnson announced Friday, in the hopes of setting a global example as the country prepares to host a key UN climate summit next year.

Wealthy countries’ continued financial support for companies taking part in oil, gas and coal projects in developing countries has become a source of controversy at a time when governments are touting climate commitments at home. Climate campaigners argue that by backing investments in overseas fossil fuel projects, developed countries are not only betraying their own climate commitments, but helping to lock poorer countries into long-term use of polluting-energies.

U.K. Export Finance (UKEF), the government credit agency that provides loans and financial guarantees for British companies operating abroad, has spent at least $4.6 billion worth of public funds to support work on fossil fuel projects since the U.K. joined the 2015 Paris Agreement. Most of the fossil fuel projects take place in low or middle income countries, and the support for them far outstrips that given to renewable energy projects in those countries, according to a U.K. parliament report.

Johnson’s office said Friday that the government had supported U.K. oil and gas exports worth $28 billion through trade promotion and export finance over the last four years.

The U.K.’s ban on support for fossil fuel support will cover “export finance, aid funding and trade promotion for new crude oil, natural gas or thermal coal projects,” the government said, and will come into force “as soon as possible” after a consultation with industry due to end in February. The U.K. is preparing to host COP26, the next U.N. climate summit where countries will have to scale up their emissions targets, in November 2021.

But the ban will include “very limited exceptions for gas-fired power plants and other projects, within strict parameters that accord with the Paris Agreement”. The scope of those exceptions will be crucial for the impact of the policy shift. Though gas plants produce less carbon dioxide than oil or coal plants, climate scientists say the opening of new gas-fired power plants is incompatible with the Paris Agreement’s goal of cutting greenhouse gas emissions in order to keep global warming below 1.5 degrees celsius over the pre-industrial era.

The UK’s export finance body sparked outrage over the summer when media outlets reported that it had offered more than $1 billion worth of financial backing for a large-scale gas project in Mozambique, one of its largest ever financing packages. 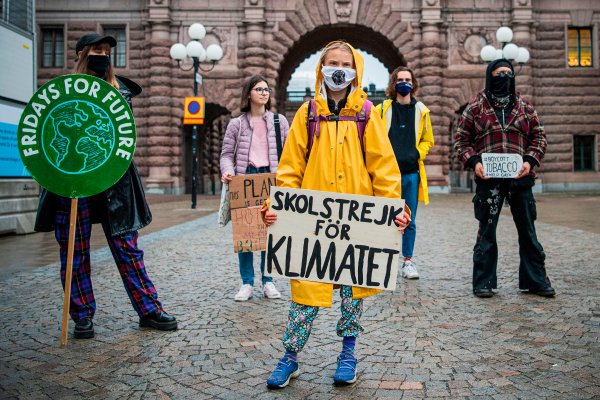 Greta Thunberg on Fighting Climate Change During COVID-19
Next Up: Editor's Pick