The science of climate change is, at its heart, fairly simple. When we emit greenhouse gases like carbon dioxide, more heat gets trapped in the Earth’s atmosphere, raising global temperatures and destabilizing the climate.

The political path to stopping that from happening is infinitely more complex – a complexity embodied in one of the main topics of this year’s U.N. climate negotiations in Madrid: international carbon markets.

The idea is that, under Article 6 of the 2015 Paris Agreement on climate change, if one country pays for carbon emissions to be reduced in a second country, the first country can count those reductions towards its own national targets. If done right, analysts at the Environmental Defence Fund (EDF) say this international emissions trading could almost double global emissions reductions between 2020 and 2035. It could also cut the financial cost of meeting current Paris Agreement emissions pledges, which aim to keep global average temperature rise well below 2 degrees over pre-industrial era, by 59% to 79%.

But Article 6 is controversial, which may be why it is the last section of the Paris Agreement still under negotiation. If the rules governing the emissions trading market are lax, it could become a “massive loophole” for emitters, allowing them to continue polluting at home without taking serious action, says Gilles Dufrasne, policy officer at Carbon Markets Watch, an international NGO. That would severely undermine efforts to prevent catastrophic climate change that would result from missing the Paris targets.

As countries try to hammer out the rules for Article 6, countries are clashing over how strict to make them. Negotiators from the E.U. and many developing nations have accused some countries, including Brazil, Saudi Arabia, Australia and India, of pushing for a system with lax rules for counting emissions reductions and credits, which would make it easier to meet Paris targets, but could undermine global progress on cutting levels of greenhouse gases in the atmosphere.

Protesters have disrupted the conference to highlight the risks of a market system, which they say distracts from the need for all greenhouse gas emissions to stop, in every country, as soon as possible

“What’s at stake is whether we’re going to manage to limit the climate crisis and reduce emissions or just pretend we’re doing something on paper,” Dufrasne says.

What is a carbon market?

Carbon markets already exist within some countries and regions. In some, like the “cap-and-trade” systems used by the E.U. and California, the government puts a cap on the amount of greenhouse gases that can be emitted by a given industry or sector of the economy. Businesses are then given an allowance of how many metric tons of CO2 they can emit. Those who emit less than their allotment can sell the extra to other businesses, pushing everyone to cut down emissions faster.

The main international carbon market scheme existing today was set up under the U.N.’s 1997 Kyoto protocol on climate change. Under that agreement, developed countries had targets to reduce their greenhouse gas emissions, but developing countries did not. So if a developing country reduced its emissions by building a solar panel plant or planting trees for example, they could sell a “credit” to a developed country, which could count that emission reduction in its own target.

But that market has effectively collapsed due to concerns over environmental efficacy and corruption. The U.S. left the Kyoto protocol in 2001, and the E.U. stopped allowing member states to buy the credits in 2012, fearing projects were not as successful in reducing emissions as they claimed to be, leaving few potential buyers. In Ukraine and Russia, which continued to use the credits, researchers found companies had abused the system to enrich themselves at the expense of the climate. A 2015 report found that an estimated 80% of projects under the Kyoto carbon trading scheme were of low environmental quality and that the system had actually increased emissions by roughly 600 million metric tons.

The Madrid negotiations on Article 6 would create a new system to replace the Kyoto protocol, which expires in 2020.

Why could Article 6 and carbon markets help cut emissions faster?

Under the market mechanisms of Article 6, countries that exceed their emissions reduction targets would be able to sell their excess reductions as credits to other countries who have failed to meet their targets. In theory, this would create a clear financial incentive for countries to cut their emissions faster, and help funnel investment to the cheapest and fastest projects for cutting emissions.

Carbon markets are also a key tool for states to get businesses to help mitigate climate change, as businesses that run climate mitigation projects, such as building wind farms or replanting forests, will be able to sell the emissions reductions to countries.

“By providing flexibility and improving the cost effectiveness of climate action, you can do more, for less,” says Alex Hanafi, EDF’s director of multilateral climate strategy. “And because you can do more with less, you can go faster and further than you otherwise would without cooperation.”

Schemes to stop deforestation or prevent degradation of land are examples where an effective emissions trading market could lead to greater investment, and in turn lead to affordable greenhouse gas reduction. Take the burning of the Amazon rainforest that has resulted from president Jair Bolsonaro’s agricultural policies: “Carbon markets could make those trees worth more alive than they are dead,” Hanafi says.

If the market system were active across the entire world, and if cost savings generated by carbon markets were re-invested in climate mitigation — a big “if” given the slow international progress on climate action — EDF analysts say emissions reductions over the next 15 years would go up “from 77 [billion tons of CO2] in the non-trading base case to 147 [billion tons of CO2] in a scenario with full global emissions trading, a 91% increase.”

Why could carbon markets hurt efforts to cut emissions?

Many climate campaigners say Article 6 negotiations could undermine the entire aim of the Paris Agreement.

First, environmentalists fear the risk of so-called “double-counting” of emissions reductions if the rules of Article 6 aren’t written clearly. Under the Paris Agreement, all countries, not just developed ones, have emissions-reduction targets. That means if India, for example, reduced its carbon emissions by 1 metric ton through a solar-power scheme, it might be tempted to both sell a reduction credit to Australia, and count the reduction in its own target. Carbon Markets Watch argues that this would amount to “cheating” the atmosphere because half as much CO2 would be reduced than countries claim.

Second, some countries want to be able to carry over old credits that were created under the Kyoto protocol to the new Paris regime. After demand for the Kyoto credits collapsed, billions of potential credits went unsold, while the emissions reductions projects that generated them continued — though often without strong checks on their effectiveness. Countries that host those projects want to be able to use or sell those credits under the new system. Australia, which has generated carbon credits by beating the relatively low emissions target it set under the Kyoto protocol, has said it plans to use those old credits to meet its new emissions targets — provoking vocal opposition from roughly 100 countries this week.

But, argue some climate campaigners, if the up to 5.4 billion credits that the U.N. estimates exist are allowed into the new system, they will water down ambition because global emissions reduction targets could effectively be cut by an amount more than the total amount of CO2 emitted by the entire E.U. in 2017.

Even if these problems are resolved by clear rules, many say that in the long term the credits bought in carbon markets are just a distraction from the fundamental need for all countries to transition off fossil fuels. “In a world where we all go to net zero, there isn’t extra mitigation anywhere that you can buy or sell,” says Dufrasne. “The whole logic of offsetting your emissions abroad doesn’t have a future. It’s not compatible with the Paris agreement.”

What is at stake in the Article 6 negotiations at the U.N. summit?

If an agreement is reached at the U.N. summit, what will matter is how robust the rules it establishes are. However, as negotiations near their planned Dec. 13 end date, an agreement is far from certain.

Negotiators have accused Brazil, Australia and Saudi Arabia of blocking an agreement that would set strong rules. “They are clearly not fighting for environmental integrity in the rules,” Bas Eickhout, leader of the European Parliament’s conference delegation told news site Euractiv.

While no country openly admits to wanting “weak” rules, “when you look at the specifics of Brazil’s proposal, most countries feel that it does not reflect robust accounting as required under the Paris agreement,” Hanafi says.

The stand-off over the robustness of the rules may scuttle the chance of any agreement. Dufrasne says countries that are keen on climate action will refuse to make a deal that has weak rules, potentially leaving the issue for a later summit, because “no deal is better than a bad deal.” 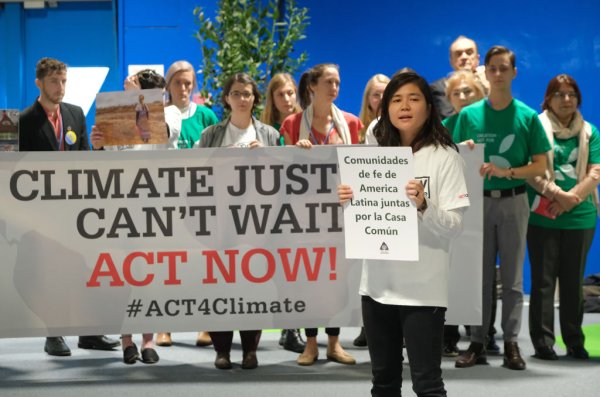 Greenhouse Gas Emissions Need to Fall Over 7% Each Year. We Must Stop Procrastinating
Next Up: Editor's Pick