How to Talk to Your Kids About Celebrating the Holidays During COVID-19, According to Experts

Much as parents rail against the end-of-year-frenzy, the crazed shopping for gifts, the endless planning for big family gatherings and the insanely long lines for Santa, the absence of those things this year leaves a gaping hole in many families’ normal operating procedures. And the radical break with tradition can be destabilizing for children (adults too). If so many traditions associated with something as well-established and ancient as Christmas or Hanukkah can be cancelled, what can children rely on?

A survey by Nationwide Children’s Hospital in Columbus, Ohio, found that two-thirds of parents of children under 18 are concerned that the effect the COVID-19 pandemic has had on their kids’ mental health will be harder to reverse the longer it goes on. More than half of them also say they’re running out of ideas to keep their kids feeling positive.

So it’s tempting, at the end of a year that has sucked so much someone should name a vacuum after it, to clutch at whatever traditions can be salvaged, to finally offer children some normalcy, to spoil them rotten to make up for all that has had to be sacrificed, and to carry on with the holiday season as if the pandemic is not going to change anything. But child psychologists and other experts suggest that there is a better way: You just have to get the children on board with it. Here are their tips for talking to your kids about the holidays this year, from ages 5 (before that children won’t have much of a memory of Christmases past) to 22.

As with most parenting challenges, the good news is that your kid will be fine. The bad news is it requires work on your part. “The overall message, unfortunately for parents, is you have another task,” says Harold Koplewicz, a psychiatrist and the president of the Child Mind Institute in New York City. “Not only are you working. Not only have you been assistant teacher. Not only have you been a playmate, but you are now Santa’s Helper—and unless you’re Santa’s Helper, you will make Christmas or Hanukkah or whatever the holiday season is a little less than it needs to be.”

Children generally prefer routine and predictability, which have been in short supply this year. So most experts say that parents should swiftly wrap their heads around the new realities of not seeing as much family as they might like, or going out to a huge party, or watching their kids be a sheep in the Christmas Pageant and come up with a plan B. “The first step is for parents or any adults who are making these decisions to sit down and talk amongst themselves,” says Parker Huston, a psychologist at Nationwide Children’s Hospital. “You need to understand: What are the things that might be consistent this year and what are the things that are having to change?”

Some parents have been clinging to the idea that they can salvage their normal traditions, which Huston discourages. “The first thing that we as adults need to do is just embrace the fact that some things have to change this year because the more we try and fight it, the longer we’re going to delay on being proactive and the more frustrated and disappointed [kids will become].” As anyone who has ever watched children reacting to their parents “eating” their candy on Jimmy Kimmel’s show knows, children are remarkably accurate emotional barometers for their parents. If you react badly to a situation, they will too. A plan prevents that.

Come up with some creative (but simple) ideas

The plan should include some ideas for what traditions you can safely keep within your nuclear family—holiday themed-pajamas, Christmas stockings, ugly sweater contests, Hanukkah gelt, different types of pie—and what you can adapt. “If you do wear silly sweaters or pajamas on Christmas Day, for God’s sake make sure Grandma and Grandpa are wearing their silly pajamas on a Zoom call,” says Koplewicz.

You may also want to take those ideas up a notch. Be creative. Maybe this year you have two trees: one indoors and one outdoors. If you like a Christmas walk, perhaps turn it into a scavenger hunt, or a snowball throwing contest. In the time you spent traveling, make some handmade cards for family. You don’t have to plot anything too elaborate, just have some suggestions at the ready to allow the changes to feel like they could be fun, too. “If parents just come with the problems, then kids are not necessarily going to be able to generate ideas,” Huston says. “But once you start them down a path, kids are very creative and adaptable and so they might actually give you great ideas.”

Don’t underestimate how much children enjoy the anticipation of the holiday season. Rather than focusing on minimizing the festivities and emphasizing the sacrifices the family is making, see if you can find a way to expand the festivities in a different direction, like trying Zoom family games or long distance scavenger hunts. Give your children something to look forward to.

Give the conversation some weight

Carefully pick a moment and have a proper conversation about what’s going on this year. Don’t just drop it on your kids in a It’s just as well your cousins aren’t coming over this holiday because your room is a mess, kind of way. Give the children your undivided attention. Denise Daniels, a registered nurse and social worker from Seattle who worked with Scholastic and Yale University on First Aid for Families, a COVID-19 workbook, is a fan of family meetings. “Begin talking to the children about what they’ve heard, what they know and what they think is going to happen,” she says. “And then talk to them about how they feel about that and let them know that indeed Christmas comes every year and this year isn’t going to be too different—it’s going to be a little bit different, but not too different.”

Huston suggests you be quite explicit about the differences. “There are certain things that in your family might not change,” he notes. “But then you also need to let them know what certainly will change. Your cousins aren’t coming to visit, and usually they stay with us but this year, for safety reasons, they’re not going to do that.” If you live in a blended household, make clear what the plan is for when the children will be where. Daniels suggests keeping an itinerary on the fridge.

Having experienced many more Christmases than children have, parents are in a great place to provide some context. There will be another holiday season next year. Our grandparents love us just as much even though they’re on Zoom. Also, we don’t revere traditions just because we’ve done them for a long time; they have an underlying meaning. “You can ask: What is the actual meaningful part? It’s what they represent,” says Huston. “It’s the togetherness. It’s the shared experience. It’s the shared meals and gift giving.”

Koplewicz likes to tell a story about when he came home from school after a bad day. He would tell his mother and father about it, and they, having survived the Holocaust as children (his father was in several different camps; his mother moved from village to village pretending to be Catholic), would suggest that his problems seemed very small. Intellectually he knew this to be true, but it did not make him feel better. “It’s very easy for us who are going through the global pandemic, dealing with financial stress and the uncertainty about our health, to judge and minimize our kids’ reactions. And that would be a mistake,” he says. “You don’t have to fix it, but you do have to listen and validate being upset about losing a favorite tradition.”

So hear out their concerns about whether Santa will be able to make his deliveries or whether they will still get presents from their grandparents or how boring it will be without their cousins and offer sympathy. It’s tough for the little ones, but Koplewicz suggests parents spare some particular compassion for older children too, after a year such as this. “Be very, very kind to your teenager and to your young adult,” he says. “The very young kids are having the time of their life having access to mom and dad all the time. But if you are a teenager, you’re missing out on the socialization. The quick kiss, the little whisper, making great friends who were interested in chess or tennis or politics or whatever you’re interested in.” Daniels agrees, even suggesting that screen time rules may need to be relaxed so that young adults get enough time with each other.

There are few things as addictive as seeing the delight on children’s faces when they open a gift they really wanted. But, child development experts suggest, upping your gift game to make up for all the sacrifices is not going to be better for the children in the long run.

Gratitude, an appreciation for what we do have, is one of the key building blocks of resilience. “I would say that this is a perfect year to focus on being mindful of giving and being grateful and mindful of others who have less than we do because there are so many people out there who are struggling this year,” says Huston. “Thinking around your own neighborhood: Are there people who are in the grandparent age who might have nobody visiting them for the first time for the holidays this year and what could you and your family do for that person?”

Koplewicz suggests parents and kids together discuss one present they might like to buy for a child in less fortunate circumstances this year, or choose a cause and give your child a Thank You note from the organization along with some other presents.

For those for whom that is impossible, Daniels adds that families who are struggling don’t need to give up on giving gifts altogether. They can register with such organizations as the U.S. Marines’ Toys for Tots, the Salvation Army’s Angel Tree program, the U.S. Postal Service’s Operation Santa, or several other organizations that help give out gifts to those in need.

Most of all, try not to worry. While this year’s celebrations may feel different to your kids, they may not feel inferior—and may indeed offer an inescapable opportunity to reflect on what the holiday really means. “I do feel like this will be one of those moments that our children and even young adults will look back on this in their older years and say, ‘You know, this was a watershed moment in my childhood,'” says Huston. “This was something really memorable.”

Correction Dec. 8, The original version of this story misstated Harold Koplewicz’s title. He is president of the Child Mind Institute, not its director. 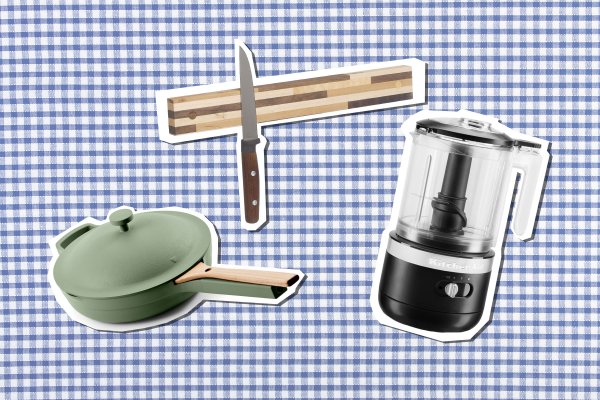 11 Tools to Make the Most of a Small Kitchen
Next Up: Editor's Pick