Should You Be Lying to Your Kids About Santa?

A man dressed up as a Santa Claus greets a girl during Christmas season on Dec. 15, 2019 in San Salvador, El Salvador.
Camilo Freedman—APHOTOGRAFIA/Getty Images
Ideas
By Judi Ketteler
Ketteler lives with her husband and two young children in Cincinnati, Ohio. Her work has appeared in The New York Times, The Washington Post, and Good Housekeeping.

When my son was eight, he asked if Santa was real. I didn’t know what to say, so I dodged the question. Naturally, he sought answers from the place that never let him down: the World Wide Web. When I spied him searching “Is Santa real?” on the iPad, I gently took it from him and asked, “Why do you want to know so much?”

“Because I feel like you’re lying to me,” he said, trying to blink away tears. He was distraught. I was too, because what had seemed like a sweet tradition was suddenly threatening the trust my child had for me. So I told him the truth—that Dad and I were Santa, and that we were never trying to “lie” about it, but rather, just to carry on something we had enjoyed as kids. He was surprised that I told him, and a little sad. But mostly, he was relieved.

A couple of years later, when my daughter was eight and wanted the truth, I had this same conversation with her, and she had a similar reaction: a tinge of disappointment, but mostly relief. Both times, honesty about Santa felt wrong, right up until the moment it felt right.

For the past three years, I’ve been researching what it means to be more aware of our own honesty choices instead of only focusing on the dishonesty in the world around us. And while the man in the red suit is an honesty dilemma for many parents, I’ve learned that it’s probably not as important as the other honesty choices we make as parents.

Unlike belief in Santa—which is something children grow out of—dishonesty is something children grow into, says Robert Feldman, a University of Massachusetts psychology professor who has studied lying for many years. In having children and adolescents purposely tell lies to mislead, he found that first graders were unconvincing liars, seventh graders were pretty decent, but college students were experts. The reason they grow into lying is that we parents show them how to with our own behavior. One University of California–San Diego study found that preschoolers and young elementary schoolchildren who had been lied to by an experimenter were more likely both to cheat (they peeked at something when they weren’t supposed to) and then to lie about whether or not they peeked.

You might be thinking this doesn’t apply to you. I thought the same, until the evening my daughter and I were buying birthday favors at Party City. When I told the cashier that I didn’t have an email address when she asked for one, my daughter gave me the side eye. That’s when I realized I was teaching her how to swat off annoyances with little lies. (I now simply say, in a pleasant voice, “I don’t want to give you an email right now.”)

We always think we need a story that justifies how we feel, says etiquette expert Lizzie Post, great-grandchild of etiquette queen Emily Post and co-president of the Emily Post Institute. When there is no significant story, she says, we stretch the truth. These are the little fibs related to flattery, saving face, or protecting ego, such as making up a story about why you aren’t attending a family function or gushing with a friend over their new car when in fact you hate it. “We teach our children that honesty is the best policy, but we also tell them it’s polite to pretend they like a birthday gift they’ve been given,” Dr. Feldman says. We want to raise kind children and be kind ourselves, except for the times when honesty is more important . . . which is when exactly?

Honesty seems like such a basic concept. So why do we get all tangled up in it, not just in parenting, but also in social situations, at work, and inside our most intimate relationships? It’s a two part answer: (1) the actor-observer bias— whereby we notice other’s lies more easily than our own—keeps us thinking we are more honest than we are (until our kid calls our bluff) and (2) much of what we think and say about honesty is just flat out wrong.

We don’t like to admit that we rely on what behavioral scientists call prosocial lies, or the lies we tell for the benefit of someone else. “It’s so deeply engrained in us to think lying is always wrong,” says Emma Levine, assistant professor of behavioral science at the University of Chicago Booth School of Business, but her research has found that when you walk people through scenarios, they will agree that lying is sometimes the right thing to do. I’ve noticed that I tend to use prosocial lies to build empathy, like if I see that someone is humiliated about a mistake, I might lie and tell them I made that same mistake when I haven’t. And you know what? I appreciate when someone does the same for me. On a trip last year, I tried to check into the wrong hotel (two sister hotels shared a parking garage) and felt like an idiot. The valet attendant saw my embarrassment, and assured me he spent the majority of his day helping people who had tried to check into the wrong hotel. Did he really? Probably not. It was nice to hear though.

Prosocial lies may seem trivial, but these small moments can have a great deal of consequence in one-on-one relationships. On a reporting ride-along with a police officer last year, I noticed how patiently the officer listened to the story of a woman reporting a radio stolen from her truck. He handed her a card that assigned her a case number and told her how to work with the investigator. As we walked back to his cruiser, he asked me: “What do you think the chances of that case getting solved are?”

“Probably not very good?” I ventured.

“Pretty much zero,” he said.

“So, why bother with it then? I mean, I guess you have to, but if it’s just pointless, why not just be honest?”

“If she pursues it, we will, too. We’ll try. But in situations like this, people want to be heard. They want their story heard,” he said. “Most of what we do is just listen to people.”

Though we value people who “tell it like it is,” what this woman needed in that moment was to be listened to, more than she probably cared about recovering the radio. The next time she interacts with the police, it might be something more serious—like she could be a key witness in a case. He needs her to trust him, and the way to win her trust is through listening and caring.

Dr. Levine’s research supports the idea that prosocial lying can increase trust when someone has true insight into what the other person needs. Her research in healthcare settings has found that some patients prefer the brutal truth, while others want hope and optimism—but the doctor needs to know what the patient prefers, rather than imposing his or her own ideas about what’s best for the patient.

However, our prosocial lies go wrong when we let fear of the awkward conversation subsume what we know we should do. When an editor of mine was called out by another writer who told him that his style had become abrupt and condescending, he asked me if I felt the same way. I did, but I froze, tried to skirt the issue, and ultimately said something like, “not really.” On the surface, it may seem kinder, but in fact, it’s cruel, because this person was asking for feedback. I wound up contacting him the next day, fessed up that I was frustrated with him, and we had a thoughtful and helpful conversation.

While that vulnerability isn’t easy, we tend to fear it more than we need to. In a study, Dr. Levine and Taya Cohen, associate professor of organizational behavior and theory at Carnegie Mellon University’s Tepper School of Business, asked people to be completely honest in their dealings with others for three days. While people predicted that it would ruin their relationships and cause hurt and pain, quite the opposite was true. “They found so much meaning in being honest,” Dr. Cohen says. This is probably why my conversations with my kids around Santa wound up feeling so meaningful, versus ruinous, and why honesty also improved my relationship with that editor.

The biggest thing about honesty we get wrong is missing the opportunity inside conversations with our children about why we lie. Explaining the Santa lie wasn’t that complicated for me, because Santa ultimately belongs in the category of mythology. I’ve learned far more from other unexpected conversations—like when, on the way to a well visit with the pediatrician, my son said, “I’m going to be honest if the doctor asks about screens. You always lie.”

My first response was rising anger, but then I realized this was an opportunity. “You’re right,” I said. “I do tend to lie about it. I shouldn’t. But do you know why I lie?”

“Because it’s bad that I use the iPad so much.”

“It’s not bad. It’s just that doctors think kids watch screens too much, and they’re right. But I don’t always follow what they say. We shouldn’t lie to doctors about things to do with health, though.”

“I do,” I said. “Because a little part of me feels ashamed that I should be a better mom. I often feel like people are saying I’m not a good mom if I do certain things or don’t do certain things. I feel judged. Do you ever feel that way?”

“Yeah, about my behavior. I’m bad sometimes and I know it.”

What a golden moment to talk about the difference between how we act and who we are, and about the nature of shame and how it so often clouds our choices when it comes to honesty.

By opening up to my kids about my own struggles, I’ve not only learned things about myself that have helped me in my career and my relationships, I’ve also shown them that honesty is a dynamic concept that takes vulnerability, courage, and discernment—excellent life skills to have long after thoughts of flying reindeer have passed.

This piece has been adapted from WOULD I LIE TO YOU: The Amazing Power of Being Honest in a World that Lies by Judi Ketteler (to be published on December 31, 2019) 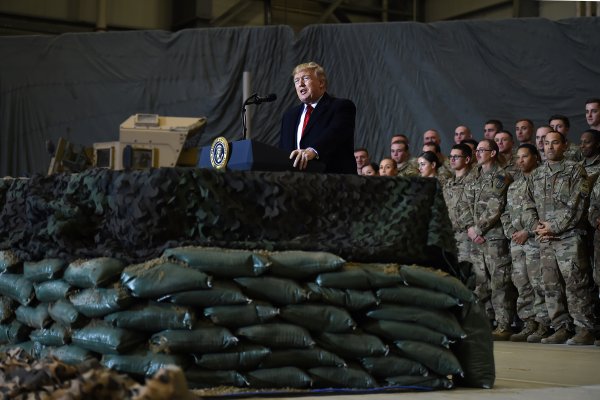 Our Troops Deserve Better Than Trump's Pardons
Next Up: Editor's Pick