I Was Worried My Anxiety Would Prevent Me From Being a Good Father. My Sons Changed That

Malte Mueller—Getty Images/fStop
Ideas
By Kevin Wilson
Kevin Wilson is the author of The Family Fang, Perfect Little World and more. His latest novel is Nothing to See Here.

Ever since I was a child, I’ve had this agitation. It seems entirely plausible that I could burst into flames. The thought began when I was 9 or 10 years old. I had a friend named Tony who had the Time Life: Mysteries of the Unknown books, which I read constantly. There was this small section on human combustion. It locked into my brain: the recurring image of people bursting into flames.

At first, I worried that it could happen at any time. But as I entered adolescence, I kind of wanted to combust. I thought it would actually make me feel better, would burn all the anxiety and worry out of my body, and I would be clean.

I was a very shy and anxious child. I kept everything in my head and tried to keep secrets from the people who loved and protected me the most. I didn’t want them to know the things I was thinking, because they were scary. Holding it all inside eventually made me sick. By the time I was finishing high school in Winchester, Tenn., my parents were driving me an hour and a half to see a therapist. I learned that being able to talk to someone was really helpful, but I knew from that age on that anxiety was going to be my life. I don’t enjoy being in the world very much. I overcompensate by trying to be overly generous so people don’t suspect there’s darkness in my mind. But when my brain gets locked in and obsessive, it’s almost impossible to break out. It’s on a loop and the loop gets so loud — I want to do whatever it takes to shut it off. I’ve learned that when a thought won’t stop looping, I’ve got to hold on to it and touch it and, sometimes, make something with it. The best way I navigate it all is by writing. Creating a story is a way for me to connect to the world — to situate my anxiety in a way that can be understood and that I can move forward from.

Before my wife Leigh Anne and I had children, I never thought I would be capable of caring for someone because of my own circumstances. We had to seriously evaluate whether we wanted to have children when I had to go to McLean Hospital in Massachusetts after having a nervous breakdown in 2006. But we decided that the positive things we could offer a child would outweigh those concerns, and Leigh Anne believed that children would teach us to become the people we needed to be. Now, we have two boys, ages 11 and 7. When my oldest, Griff, was born, I felt this kind of wonder that I had brought a child into the world—replaced almost immediately with anxiety-ridden questions: How am I going to do this? How am I going to keep this child alive? And not just keep him alive, but turn him into a person?

The only thing I knew how to do, because I have always been pretty isolated, was to reach inside myself and give my sons all the things that had kept me going. I would read my boys every story I could find. We would make our own stories. I would try to get them to appreciate that when the world is overwhelming, a narrative can be sustaining and can help you survive. I gave Griff comic books — I loved the ideas in those, the magic of them, and he did too. My younger son Patch and I would listen to rap music, which might have been inappropriate for a 4-year-old, but I couldn’t help myself. I loved it, and it made sense to share it with him. Again and again, I tried to show them my ways of coping with the world through the beauty of art.

When Donald Trump was elected, there was all this talk about how great art was going to come from these trying times and that felt like such bullsh-t to me. Great art can come from anything. I don’t want the world to have to be ravaged in order for art to exist. And I don’t think art can change the world — but I do believe art can help you survive it. Books, movies and music can make life tolerable. They allow you insight into the way the world works, in the way people work; and with that insight, you can manage life a little bit better.

I used to really struggle with how I could live life with my children. I would think, How am I going to take care of them when I can barely take care of myself? I started to think about the saying, “the strong protect the weak.” That’s the way a society should function. Those in power, the people who are strong and able, should protect those who can’t protect themselves. But my worldview has changed radically since I’ve had kids. I’ve realized that the strong don’t protect the weak. They’ll do it, if it’s in their best interests, or if they feel like it. But people who are strong and in power find weakness repulsive. They don’t want to be around it. They can’t understand why it exists. I came to understand that the weak protect the weaker. I might feel like a damaged person, but I am always going to reach into myself and do as much as possible to protect my children, to give them a safer world. I can become slightly stronger to protect the people who need me, even when I feel like bursting into flames.

My children are aware of who I am and how I operate. They know that I don’t like to go into the city — that I don’t like going to their schools when they have performances or parent-teacher conferences. I don’t want to be in a building full of people. But now, when my sons recognize anxiety and feelings of weirdness in themselves, they know they’re not alone. I’m grateful that my children live in a time where people are more open about mental health. Their teachers and friends are sensitive and understanding. Griff has friends who are anxious in completely different ways than he is. My children think anxiety is not that big of a deal, whereas for me, it was the biggest deal in the world.

Every day that passes, I see that I’ve made it another day, that our family has made it another day — and I’ve realized that maybe my fear that I was going to ruin my children was self-important. Maybe my sons won’t let me ruin them. Because they’re strong and interesting and their own people. Griff just started middle school and immediately signed up for theater. He has a part in the play and he’s memorizing all of these lines. I would never have done that. Before I had children, I always thought that the best way to keep safe was to bunker down and make myself as small as possible, to disappear from the struggles I faced. But when we brought Griff and Patch into the world, I understood that the world would continue after I died, which didn’t matter to me before — I wanted to get in and get out. Now I can imagine the world after me, and my sons are in it, as well as all the amazing people who I’ve met because of my family, and I want to stay here as long as I can, to try and make it better. I have to survive and figure out how to take part. And I owe that understanding to my sons. They have taught me that we’re stronger and better if we connect. 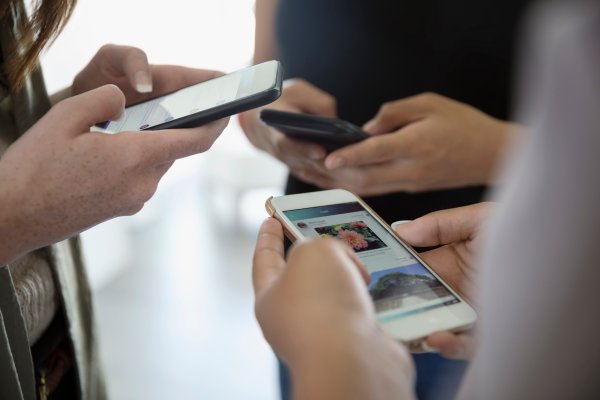 It’s Not Necessarily Bad if Your Kid Spends Lots of Time Online. But Watch for These Warning Signs
Next Up: Editor's Pick