No actor likes being typecast, and all actors like to stretch. You can’t blame Aubrey Plaza, a marvelous comic actor, for wanting to try something a little more intense than usual, like the tricky dual role—or is it just one role?—she takes on in writer-director Lawrence Michael Levine’s semi-comedic psychological thriller Black Bear. Black Bear is two films in one, or perhaps a film within a film, or perhaps just a single film about the rigorous challenges of writing, performing and creating. To explain it in too much detail would give the game away: your enjoyment of Black Bear will depend on your tolerance for cerebral game-playing for art’s sake. But if the movie is sometimes a little too hung up on its somewhat tortured premise, it still offers some subtle, dusky pleasures. Chief among them is Plaza’s performance: she plays Allison, a film director, or maybe an actor, or possibly both. Sometimes she’s a woman who’s unraveling; other times, she’s the unraveler. Black Bear gives her plenty to do, even if the story ultimately lands on an only semi-satisfying note.

Black Bear opens with a striking shot of Plaza’s Allison, in a lean red maillot, sitting cross-legged on a dock, with mist all around. We’ll see this shot again; we’ll also get a glimpse at how it was made, an acknowledgement of its manicured artificiality. But let’s not get too far ahead of ourselves: first we learn that Allison is a filmmaker who has booked a stay at the luxe-rustic lakeside home of a young couple, Gabe (Christopher Abbott) and Blair (Sarah Gadon), who is pregnant. From the start, Allison isn’t sure what she has stumbled into. Tensions between Gabe and Blair simmer openly—some of them involve Blair’s perception of Gabe as being anti-feminist—and Allison starts out tiptoeing around them, unwilling to get involved, though before long we see that she’s doing that slippery thing of taking a side without really taking a side. It’s at this point you think Black Bear is going to be a steamy Adirondack noir, with Plaza as its lanky, conniving femme fatale. That would have been a pretty good movie right there.

And then Black Bear flips into something else, and we meet another Allison, a fragile actor who’s the star of a film—being shot in and around the same lake house—that’s directed by her husband, also called Gabe and also played by Abbott. The plot of the film-within-a-film involves a love triangle, or perhaps just a perceived love triangle, in which Blair (again played by Gadon) plays the possible homewrecker. Between takes, Blair and Gabe plot ways to wind Allison up and make her jealous, a cruel scheme designed to get a better performance out of her. Their game veers out of control as the drama between Gabe and Allison, as captured on film, spirals into John Cassavetes-Gena Rowlands territory.

The movie’s exploration of the blurred lines between reality and performance isn’t quite as profound as Levine seems to think it is, though dashes of bleak humor keep the whole thing moving along. (Gadon is particularly sly, having some fun with the glimmers of wickedness that undercut her porcelain blond composure.) But no matter what, Plaza is compelling to watch. She has a great, screwball-dame face just made for ’30s-style comedies, if only anyone still knew how to make those. (She was wonderful in the 2013 teen-sex comedy The To-Do List, and made a superb unhinged nun in the 2017 Boccaccio-a-go-go farce The Little Hours.) But here, at least, she gets to play a semi-scheming temptress, and she makes a fine one: with those cartoon-vixen eyes, she looks wily enough to try anything, and get away with it. And when the story shifts its focus to Allison—the jittery, unstable performer version—Plaza makes the character’s vulnerability so believably textured it’s a little hard to watch. This Allison is a woman crumpling with need right before our eyes, though we also see how manipulative and self-destructive she is. “I’m bad. I’m too much,” she tells Gabe tearfully, and both of those things are true. Plaza doesn’t have to prove she can do more than comedy—when an actor is as good at it as she is, there’s no “more than.” Even so, she pushes herself right to the knife’s edge in Black Bear, bringing us along with her. You could call it a daring performance, but that’s only if you didn’t know she had it in her all along. 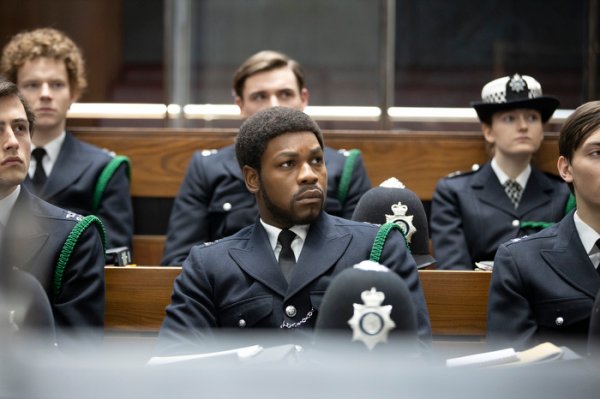 The True Story Behind Red, White and Blue From Steve McQueen’s Small Axe Anthology
Next Up: Editor's Pick