When I met Mackenzie Davis in the lobby of New York City’s Bowery Hotel on a crisp November evening, the presidential election was just days away from rattling the nation. Davis’ new movie Always Shine, a smartly unsettling feminist thriller for which Davis won Best Actress at this year’s Tribeca Film Festival, was set for theatrical release a few weeks later, on Dec. 2. As it was wont to do, the election became a part of our conversation. It made sense, given the parallels between a movie about the crushing pressures of womanhood and a candidate whose defeat, some would soon argue, had more than a little to do with those pressures.

“How could you be effortlessly charming if all you’d ever heard is that your laugh is horrible and your sternness is horrible, your passion is wrong, your face is wrong, your hair is wrong?” Davis asks. “The only feedback she’s gotten is ‘stop.’” She’s talking about Hillary Clinton, but she could just as easily be talking about her character, Anna, a young actress who faces rejection, by men and casting directors alike, because she is brash and ambitious and disinclined to acquiesce.

Directed by Sophia Takal and written by her husband, Lawrence Michael Levine, Always Shine focuses on the relationship between Anna and her best friend Beth (Caitlin FitzGerald of Masters of Sex), who go on a weekend getaway to Big Sur. Beth has a boyfriend and Anna is single. Beth is a working actress whose roles mainly consist of panicking damsels—sometimes naked ones—in horror films. Anna is 50-percent self-righteous about her decision not to take those roles and 50-percent desperate to have them. The tension between the two, buoyed by jarring cuts and a discordant score, escalates until it has no option but to explode.

“They [turned] this thing that’s supposed to be like chick lit, a Bridget Jones’s Diary frivolous romp through dating life and body loathing, into how it feels—which is a suffocating thriller where you’re just trying to figure out a way to survive,” Davis says of Takal and Levine. “They just decided that it was important, and not stupid.”

Davis, who you might recognize from her role as a prodigy programmer on AMC’s Halt and Catch Fire or as a NASA engineer in The Martian, found the script intimate to the point of being disconcerting. Reading it, she felt as though Levine was articulating her own experience as the kid who was “loud, aggressive, untraditionally feminine,” and regularly “told to stop, be less, be this.”

Davis grew up in Vancouver, British Columbia, taking every opportunity she could to perform. After studying English Literature and Women’s Studies at McGill University and a stint modeling in Europe, she attended Manhattan’s storied Neighborhood Playhouse School of the Theater. The school counts among its notable alumni Gregory Peck, Diane Keaton and Jeff Goldblum—whose picture Davis made a habit of kissing every day on her way to class, at first as a joke and later, she says, out of a sense of “deep tradition.” Before she graduated, she slipped her own photo into a frame on the wall.

Graduation brought with it a sense of dread and depression, not only because, at 24, Davis already felt late to the game, but because she wasn’t willing—like Anna—to take any old gig. “I wasn’t happy to just be an actor in any capacity,” she says. She didn’t want to play the girlfriend or the episodic love interest, and she figured that meant she’d have a difficult time breaking in. But she didn’t—which, she self-edits, “makes this depression story moot and stupid.” Instead, she broke out opposite Guy Pearce in Drake Doremus’ 2013 romantic drama Breathe In, then landed a leading role on Halt. Her recent turn on Black Mirror was regarded by many as one of the best episodes of television this year, and she’ll appear in next year’s long-awaited Blade Runner sequel.

Depending on your perspective, Always Shine is either about what it’s like to be a young actress or what it’s like to be a woman. After a long day of interviews, Davis notes that there’s been a clear distinction in the way journalists have asked her about the movie. “For the men, it’s about actresses, and for the women, it’s about being a woman,” she observes. To her, the two characters’ conflicting approaches toward establishing themselves in Hollywood—Beth’s decision to bask in the male gaze and Anna’s insistence on relying on talent alone—could just as easily be reimagined in any industry. “It’s a surrogate for this emblematic version of femininity, but it’s not the thing itself.”

As an actress and model, Davis recognizes in herself both the desire to, as she puts it, “win the ingénue parade,” and the urge to rebel against it. “I have to present this image of somebody who’s smart and funny and easygoing, but also skinny and incredibly well-dressed, undone in a natural way but perfectly done, never wearing too much makeup but also has the most beautiful skin, can drink a lot but doesn’t get a rash on her face…” She throws her hands up. “I don’t know how to embody all of those things at once.”

Always Shine doesn’t present a solution to that problem. But it validates the problem, makes it worthy of exploration beyond the lighter touch of a rom-com. Davis sees the film in much the same way as she sees Elena Ferrante’s Neapolitan novels, which follow the relationship between two childhood friends into womanhood. Ferrante, she says, “dignified the female experience in a way that nobody had before by making it epic and important.” Always Shine makes it worthy of a terrifying thriller—because sometimes, everyday womanhood is just that. 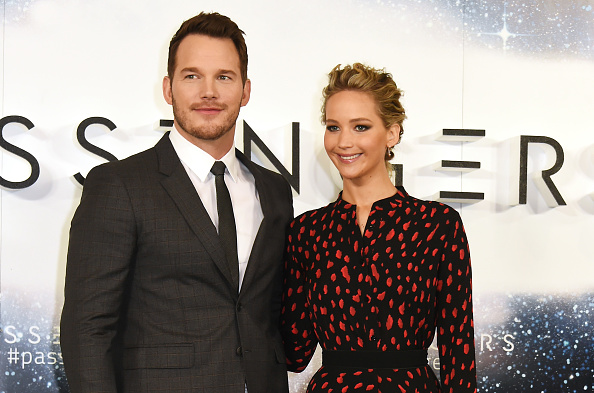 Chris Pratt Cropping Jennifer Lawrence Out of Passengers Photos Is Just the Best
Next Up: Editor's Pick