Partners In Health
By Jamie Ducharme

“Am I allowed to be a normal human and say, ‘How are you?'” asks Dr. Paul Farmer as soon as our Zoom call connects.

It’s an apt introduction for a man who became a living legend in the global health world mostly by being a normal human who does extraordinary things–starting with co-founding the Boston-based nonprofit organization Partners in Health (PIH) in 1987, before graduating from Harvard Medical School. Since then, PIH and its global staff of 18,000 have helped strengthen health systems in the “clinical deserts” of Haiti, Rwanda, Peru, Russia and numerous other countries. PIH’s work in these places is guided by a simple, albeit difficult to implement, principle: namely, that all humans are equal and worthy of effective medical care. Thinking like this—more radical than it should be in an often self-centered world obsessed with cost-effectiveness—has made the 61-year-old Farmer one of the world’s most influential voices on health equity and global health delivery.

You wouldn’t necessarily know this simply by talking to Farmer. He often interrupts his own thoughts to make a joke. He brags about his students at Harvard like a proud father–which he is, to three kids. In many of the communities where PIH works, he is known simply as Dr. Paul. And though he is beloved in these areas, it is not because of his résumé–he cheerfully tells the story of a Haitian woman who, upon learning he’d written a book, exclaimed, “Dr. Paul, you never told us you could read and write!”

Dr. Paul’s latest book, Fevers, Feuds, and Diamonds: Ebola and the Ravages of History reads in part like a memoir, in part like a scholarly text. It’s a sweeping history of West Africa, Ebola and the precipitating factors that made the former a too hospitable host for the latter during the 2014—2016 outbreak that killed more than 11,000 people in Sierra Leone, Guinea and Liberia. The book details PIH’s work during the crisis, but Farmer insists it was mainly intended as a “reparative exercise”—one inspired by patients who survived Ebola, and meant to elevate West African voices, experiences and histories.

Less intentionally, it reads like an eerily prescient road map for understanding the COVID-19 pandemic. Farmer finished his book on April 10, at the height of U.S. lockdowns. By the time he finished writing, he says with a wry smile, his editors were less concerned than they once had been about the public understanding phrases like PPE (personal protective equipment) and social distancing.

The general public is also, it is safe to say, more interested in public health now than a year ago, and there is plenty to satisfy that interest in Farmer’s book. He writes extensively about another deceptively simple concept that guides PIH’s work: securing the “staff, space, stuff and systems” necessary to deliver reliable clinical care.

All of these things were lacking in West Africa when Farmer traveled there to fight Ebola, which made it near impossible to actually treat Ebola patients–as opposed to simply trying to isolate them before they spread the virus—and to keep hospitals functioning well enough to take care of patients who needed any other type of medical treatment. COVID-19 has shown that the U.S. is not immune to these problems either.

The U.S. currently needs staff (for contact tracing), space (for COVID-19 patients to recover without infecting others), stuff (a vaccine) and systems (for testing and reopening). “We have so many resources, and we’re sinking so much of it into health, but we’re putting very little into public health,” Farmer says. “It’s been a tension between medicine and public health for a long time. You see that by the patchwork of our care-delivery system and our political system.”

PIH was well positioned to help when COVID-19 arrived in the U.S., given its experience in places similarly lacking staff, space, stuff and systems. This spring, Farmer worked with Massachusetts Governor Charlie Baker on building out the state’s contact-tracing workforce, using lessons learned in Rwanda and Haiti to put together a community-health corps of more than 1,000 people in two weeks. The program, which at its height employed 1,900, hasn’t been flawless; some local officials complained it was unreliable and inefficient, and it was downsized to 700 staffers in July.

The U.S. is not known for its stellar contact-tracing abilities, in part because Americans’ “go-it-your-own, libertarian approach” makes them wary of sharing personal information, Farmer says. Many of the populations disproportionately affected by COVID-19, like communities of color, also have a deep-seated distrust of the U.S. medical system, stemming from centuries of medical experimentation and inadequate access to and quality of care. “We need to recover from COVID, and that’s not going to happen without confronting these cultural problems,” Farmer says. “But … there’s a lot we can do without saying, ‘O.K., now we have to address the entire cultural makeup of a very heterogeneous nation'”—things like hiring enough contact tracers.

Farmer says PIH approaches contact tracing the way it approaches most tasks: by trying to convince people they are interested only in keeping them and their loved ones healthy. “I’m going to sound very touchy-feely-ish, but it’s [about] compassion and empathy and fellow feeling,” Farmer says. “You can’t do anything in public health without fellow feeling.”

Even with a teaching load at Harvard, a job as the chief of global health equity at Boston’s Brigham and Women’s Hospital and the Massachusetts contact-tracing gig, this year has been a slow one for Farmer, a man who typically spends a good chunk of his time on different continents. Being mostly sequestered at home means his garden has never looked better, he says. Still, a slow year for Farmer would be an exceptionally busy year for most people. He spent a month in Rwanda and visited Haiti once over the summer, and he’s still directing PIH’s strategy in other countries from afar.

Farmer is an unflappable optimist, to the point that it’s hard to imagine him getting stressed by much of anything. Though he says he’s deeply saddened by the failures to contain COVID-19, particularly in the U.S., he also says he’s encouraged by much of what’s happened this year, like the promise of a pro-science Biden Administration and, most of all, the long overdue racial-justice movement following the killings of George Floyd and Breonna Taylor.

Perhaps most striking, though, is Farmer’s insistence that his optimism is, in fact, logical. “When you settle on a problem, devote the resources to it and have at least some ability to incorporate new information, every time, it gets better,” he says. “I don’t have any experience, anywhere, where you just apply yourself, along with others, and then do not see progress. My optimism has pretty honest roots.

“Although,” Farmer adds after a brief pause, “I would probably be an optimist even if not.” 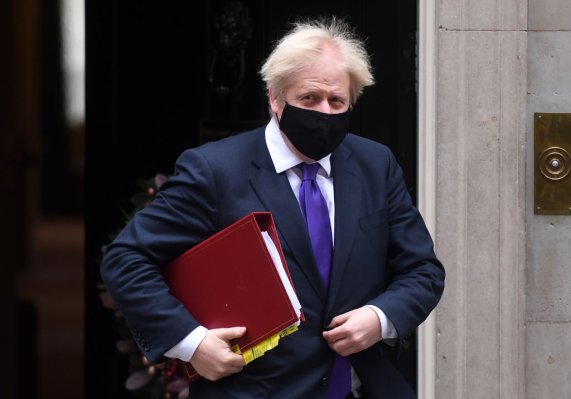 How the U.K. Approved Pfizer's COVID-19 Vaccine So Fast
Next Up: Editor's Pick