Joe Biden Says the U.S. Will Lead on Climate. But First He Has to Regain World Leaders' Trust

Joe Biden named former Secretary of State John Kerry to a new top position on global climate policy, a public step toward what the President-elect has promised will be a renaissance in American leadership on the issue.

Activists who hope climate change will play a central role in the new administration cheered the news, but both Kerry and Biden have their work cut out for them. After four years under Donald Trump, the Biden Administration inherits a badly bruised international reputation. Trump repeatedly denied the science of climate change, rolled back dozens of environmental and emissions-reduction regulations, and earned the derision of nearly 200 nations who co-signed the Paris Agreement on climate change when he announced the United States’s withdrawal from the pact six months after taking office.

With the U.S. retreat, the European Union and China came to occupy central leadership roles, while feeling burned by Washington — a pattern that has repeated itself over decades of climate discussions. “[The U.S.] been a little like Lucy pulling away the football from Charlie Brown and Peanuts,” says Alden Meyer, an independent strategist with four decades of experience in senior positions at major U.S. environmental groups. “The world has seen this movie too many times, and they’re getting tired of it.”

To turn the page on the Trump era and re-establish the U.S. as a global leader on climate, Biden and Kerry must rapidly accelerate emissions-reduction policies domestically and offer tangible support to partner nations that are making progress abroad. Crucially, allies say, the U.S. will need to reengage the world with a recognition that Washington can no longer unilaterally dictate the terms of engagement. “We have to reenter this field, when we join our allies, with a great sense of humility,” says Gina McCarthy, the former Environmental Protection Agency head who is now the president of the Natural Resources Defense Council. “We have a great deal of trust that we have to rebuild across the world.”

Part of the Biden Administration’s strategy will be to remind the world of the President-elect’s history of engagement. As a chair of the Senate Foreign Relations Committee and, later, during his eight years as Vice President, Biden developed a positive reputation on the international stage, helping to usher in a golden era of American climate diplomacy. Kerry is also not only well-known internationally, but enjoys particular credibility in climate discussions. As Obama’s Secretary of State, he helped broker deals to win over developing countries and ensure adoption of the Paris Agreement.

The first real test will be whether the U.S. can put its money where its mouth is and pursue sweeping climate policy at home. Biden’s commitment to use a “whole of government” approach to tackle climate change — incorporating it into policymaking in nearly every agency from the Treasury Department to the Department of Defense — represents an important start, allies say. Restoring the Obama-era regulations that Trump has nixed, from vehicle emissions standards to rules targeting methane emissions, will also be key. Still, climate policymakers around the world are aware of the difficulties the Administration will face passing legislation through a divided Congress, as well as the potential challenges posed by an increasingly conservative judiciary.

The most important data point for global leaders will likely come when the U.S. announces a new formalized pledge, known as a Nationally Determined Commitment (NDC), to reduce emissions sometime next year. The NDC, a requirement under the Paris Agreement, will lay out a 2030 target for U.S. emissions reductions as well a plausible path to get there. An ambitious target would help build momentum for the United Nations climate conference scheduled to take place in Glasgow at the end of 2021. Countries that signed the Paris Agreement are expected to announce new NDCs ahead of that gathering—and a strong commitment from the U.S. would send a clear signal: the U.S. is back.

It remains to be seen how the U.S. will shape global climate discussions once it returns. One of the biggest questions is how Biden will re-engage China, the world’s largest emitter, which has sought to position itself as a climate leader in the U.S.’s absence from the global stage. China has committed to hit net zero emissions by 2060 and invested heavily in green industry. Under the Obama Administration, climate change served as an olive branch of sorts, an area where the two countries could work constructively—even as trade and military tensions simmered. But it remains to be seen whether Beijing and Washington can overcome the rupture in the relationship that occurred under Trump. “You have to engage them,” says Jonathan Pershing, a former special envoy for climate change at the State Department. “The question is what’s the balance between the stick, and the carrot.”

The U.S. and China are the world’s two largest emitters, generating more than 40% of global emissions, and meaningful collaboration between the two could quickly drive change not just in their domestic economies, but also within the countries where they have clout.

The outlook is different in Europe, where the EU — as well as individual countries — will certainly welcome the U.S. back into a leadership role. But European leaders may be especially conscious of the U.S.’s tone. While the Trump Administration has spent the past four years touting the rhetoric of America First, the EU has buckled down and done the difficult work of implementing aggressive global climate measures, including committing hundreds of billions of euros this year to greening the continent’s economy via its Green Deal. “The United States clearly faces a deep credibility deficit with our allies and the rest of the world,” says Nat Keohane, a vice president at the Environmental Defense Fund who advised President Obama on climate policy. “Climate is the best, or at least the most immediate, way to start climbing out of that credibility deficit.”

It’s unclear exactly what approach Biden will take to rebuild those relationships and bridge the gap. On the campaign trail, he promised to hold a climate summit in the first 100 days of his presidency, at which he would strong arm countries into reducing their emissions. “I would call the 100 nations — over 100 nations, but the 100 major polluters to the United States in the first 100 days to up the ante,” he said in the final Democratic primary debate in March. “If they didn’t, there would be a price to pay.”

International climate policy experts say the President-elect is unlikely to take such a punitive approach, in part because the U.S. will need to get its domestic act together before it can threaten disciplining actions abroad. Recent history provides several examples of the U.S. ultimately retreating on global leadership. In the 1990s, the Clinton Administration played an important role crafting of the Kyoto Protocol only for the U.S. Senate to pass a bipartisan resolution effectively rejecting the treaty. More recently, under the Obama Administration, the final text of the Paris Agreement had to be structured to meet U.S. legal requirements and to survive American Congressional and court scrutiny.

Experts widely expect the Biden Administration to come out of the gate early next year pursuing a diplomatic tack rather than pushing penalties for other countries, perhaps using the summit to showcase the progress made by allies and the achievements of some of the most vulnerable countries. Others predict Biden and Kerry will use the initial gathering as an opportunity to announce financial support for developing countries, which has been set back under Trump. However these details play out, the bottomline remains that constructive U.S. engagement on climate change is far and away better for the world of climate policy than any alternative. And, on that score, the rest of the world needs no convincing.

“There are have been highs and lows now for many years,” says Laurence Tubiana, the president of the European Climate Foundation who served as a key framer of the Paris Agreement as France’s Climate Change Ambassador. But “we need the U.S. back to accelerate a movement that has started already.” 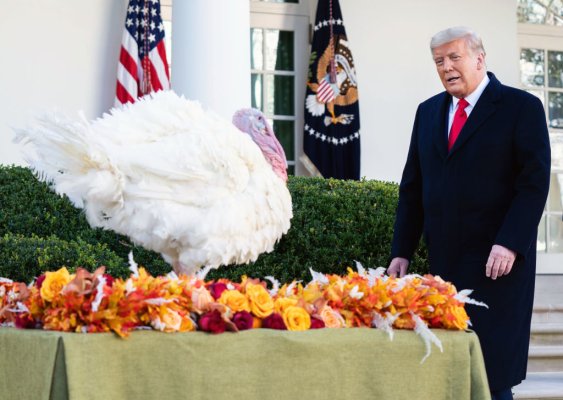 The Transition to Joe Biden's Presidency Has Begun. But Donald Trump Won't Talk About Losing
Next Up: Editor's Pick