In a year when the headlines were dominated by conflict around the things that make us different—race, class, gender, politics and all the other markers of identity—the best nonfiction books tore into those tensions and explored the humanity beneath. Some authors revisited historical figures to ask how their perspectives on race and religion shaped the world, for better or worse. Others shared personal stories to underscore the impact of a society that endangers people due to realities outside of their control. But all these titles call for greater awareness and empathy.

Author and poet Claudia Rankine knows how difficult conversations about race can be: she knows they can lead to resentment, rage and even deeper misunderstandings between people. But she tries just the same to have them again and again in Just Us: An American Conversation, which blends essay, history and poetry and recounts a series of dialogues between herself and white people on a slew of thorny topics, from affirmative action to the whitewashing of history to the link between blondeness and white supremacy. Rankine sometimes finishes these talks trembling with fury, trying to hold in her emotions lest she be labeled an “angry Black woman”; other times, her counterparts reveal perspectives she hadn’t considered. Through these exhaustive (and exhausting) conversations, Rankine demonstrates how Americans of all races might begin to engage with each other with more honesty and grace—and, in the process, bridge gaps that these days can feel wider than ever.

There will never be one definitive book about a figure as complicated and malevolent as Adolf Hitler, and, indeed, each year brings a horde of new books that attempt to understand the rise of the dictator and his Nazi party. But German historian Volker Ullrich’s two-volume biography, the second of which, Hitler: Downfall, 1939-1945, was published in a sharp English translation by Jefferson Chase this year, stands above its peers. It is an epic book that narrates in vivid detail how Hitler reached the height of his power in Germany and to the brink of triumph as he conquered much of Europe, and then fell in a long, bloody spiral of defeat. Perhaps one of the clearest insights Ullrich gives readers is a study of the amalgam of madness and narcissism that spectacularly wowed his country and other parts of the world—until it proved his undoing.

8. Having and Being Had, Eula Biss

In Having and Being Had, her collection of snappy essays concerned with capitalism and privilege, Eula Biss addresses the discomforts that come with living comfortably. At the start of the book, she and her husband have just purchased their first house, leading her to question the actual value she assigns to the items she’s considering buying. Biss investigates everything from the messaging on IKEA catalogs (which, she discovers, creepily suggest that “consumers” and “people” are not one and the same) to the origins of Monopoly, constantly evaluating the purpose these items serve in our lives. Through her precise and poetic prose, Biss makes startling observations on the inner-workings of capitalism and how it informs our perspectives on class and property.

Buy Now: Having and Being Had on Bookshop | Amazon

In her debut book, Karla Cornejo Villavicencio sets out to portray the nuanced, varied realities of life for undocumented Americans through a seamless blending of journalistic interviews, narrative storytelling and personal reflection. A DACA recipient, brought to the U.S. from Ecuador by her parents at the age of 5, Cornejo Villavicencio approaches her writing with bracing honesty and precision. She gets to know laborers in New York City, still suffering effects of carrying out treacherous cleanup work after 9/11, and patients in Miami seeking alternative options for medical care because they have no access to health insurance. The greatest strength of the book, a National Book Award finalist, is its many characters: Villavicencio paints her subjects not with the stereotypes so often forced on them in media coverage and political debate but instead in their full individuality and humanity—sometimes unflattering, sometimes affirming, but always real.

When the world stopped this year, many people found themselves looking out the window, hearing birdsong replace car horns and watching green buds emerge from the frozen ground. In a moment of darkness, it was a wonderful balm to turn to nature. And in her beautiful collection of essays, Vesper Flights, Helen Macdonald shows us how to better observe and comprehend the scenes around us and to enter, however briefly, the worlds of other living things, whether starlings overhead or mushrooms at our feet. In exquisite prose, Vesper Flights further establishes Macdonald as one of the great nature writers of our time—and as a ringing voice of sorrow against the ravages of climate change. Read her to be enthralled, and read her as warning.

5. The Dead Are Arising, Les Payne and Tamara Payne

What does it take to become a political revolutionary and cultural icon like Malcolm X? For nearly 30 years, Pulitzer Prize-winning journalist Les Payne compiled research and conducted original interviews about Malcolm’s life to try to answer that question. Sadly, Payne died before he could finish the book, but his daughter Tamara Payne, who helped as a researcher, completed his mission. Together, they have written the essential book for understanding the force that was Malcolm, with deep insights into his childhood, his path to the Nation of Islam and his assassination. In this sweeping biography, which won a National Book Award, readers see a full portrait of a man, set against the vivid backdrop of an America torn apart by the fight for racial justice.

Buy Now: The Dead Are Arising on Bookshop | Amazon

Within the first pages of Pulitzer Prize-winning poet Natasha Trethewey’s memoir, we learn of her mother’s murder. In a wrenching prologue, Trethewey reflects on the moment when she was 19 years old and visited her mother’s apartment the day after she was killed. The horrific trauma, and how she remembers it, is at the center of Memorial Drive: A Daughter’s Memoir. The book is both a chilling portrait of a mother grappling with racism and abuse and a stunning dissection of the language we use to process memory and loss. In unpacking the events that led to her mother’s tragic death, Trethewey’s voice is controlled but powerful. And though we know how the story ends, the tension in its telling never falters, making its conclusion all the more gutting.

3. The Dragons, the Giant, the Women, Wayétu Moore

At five years old, Wayétu Moore is consumed by thoughts of her mother, who is studying in New York City on a Fulbright scholarship. The rest of the family is in Liberia, where the promise of a reunion is interrupted by the emergence of civil war. In her stirring memoir, Moore describes her family’s journey as they are forced to flee their home on foot in pursuit of safety. She narrates their saga through the eyes of her younger self, culminating in an imaginative examination of how we process hardship and dislocation. And she doesn’t stop there. Moore picks apart her experience living in Texas, where her family eventually lands, and then catapults back in time to write from her mother’s point of view as a student in the U.S. It’s an innovative and effective structure, one made possible by Moore’s ability to so effortlessly capture the many voices of her family.

Buy Now: The Dragons, the Giant, the Women on Bookshop | Amazon

Seamlessly moving between cultural criticism and her own stories, poet Cathy Park Hong dissects her experiences as the American daughter of Korean immigrants in her searing essay collection, Minor Feelings: An Asian American Reckoning. She mines both personal and collective adversity in a series of narratives that ask urgent questions about the impact of racism against Asian Americans. Hong’s essays are as impressive in their sharp nuance as they are in their breadth: she writes of her revelations watching Richard Pryor’s stand-up, reflects on how she treats the English language in her poetry and explores the space made for minorities in American literature, among other subjects. In unpacking the indignity and isolation that she can be made to feel as an Asian American—feelings too often dismissed as “minor”—Hong reclaims her sense of self and calls for compassion.

In a year of endless tragedy for people across the country, but especially for Black Americans, The Warmth of Other Suns author Isabel Wilkerson returned with another transformative book on identity. The product of more than a decade of research and reporting, Caste: The Origins of Our Discontents is an electrifying work that reframes injustice and inequity in the U.S. as a caste system, not unlike those in India and Nazi Germany, with Black Americans in the position of least power. The Pulitzer Prize-winning journalist combines a deep study of history, interviews with experts and ordinary people around the world and frank yet moving stories from her own life to develop a compelling theory of American injustice and the roles we all play in perpetuating it.

Write to Lucy Feldman at lucy.feldman@time.com and Annabel Gutterman at annabel.gutterman@time.com. 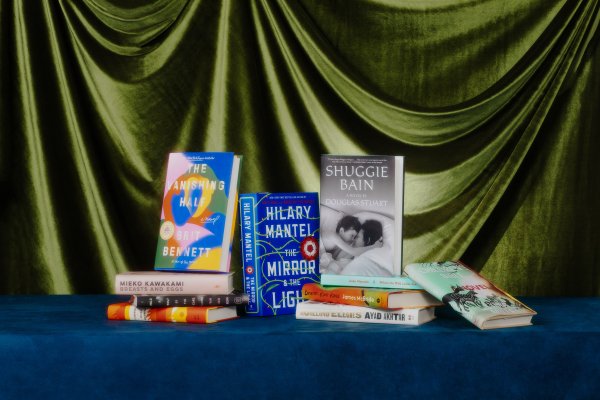