'We Have No Practice Talking About Race in This Country.' Claudia Rankine on White Privilege and Her New Play Help

On a February afternoon at the Manhattan arts complex The Shed, 19 white men are practicing an interpretive dance sequence on rolling chairs. In between takes, they are at ease; they playfully slide off their chairs, manspread, roll around in circles, drum absent-mindedly on their knees.

But no such repose is in the cards for Claudia Rankine, who wrote the play these actors are rehearsing. She watches with a laser focus, her lips pursed, her ring-covered fingers clasped together; she scribbles notes and whispers on-the-fly revisions into director Taibi Magar’s ear.

Rankine’s play, Help, arrives at The Shed on March 10, and stems from a widely-read essay that Rankine wrote in the New York Times Magazine last summer about the overwhelming and omnipresent privilege of white men. Ever since the essay was published, she’s been receiving a steady stream of responses from them: terse dismissals, thoughtful self-interrogations, scathing diatribes. Rankine adapted their words into the bedrock of Help, in which 19 men fume, deflect, backpedal and sputter though attempts to understand their place in a shifting America. “If the cost of my way of life is your life, that’s not my concern,” one says venomously to a dramatized version of Rankine played by Roslyn Ruff.

The play is just one piece of a larger effort by Rankine—a Yale professor whose 2014 work Citizen made her a New York Times bestseller, a National Book Award finalist and a MacArthur Fellow—to interrogate whiteness in an era in which white nationalists march the streets and the President scapegoats “sh-thole countries.” In September, she will publish Just Us, a collection of conversations around various aspects of white privilege. Through the Racial Imaginary Institute, the organization she founded in 2017, she will continue to put on film series and art exhibits that deal with race across the country.

Rankine hopes that whether people love or hate her work, it will strike a nerve and force uncomfortable conversations—including about the idea that race is a construct designed to advance white people, and it is embedded into every aspect of American society. “We have no practice talking about race in this country—and that’s why it goes from statement to hysteria immediately,” she says. “Unless we begin to start having conversations with each other, we’re never going to figure this out.”

Before rehearsal, Rankine calmly sips cauliflower soup and workshops her script in the luxe confines of The Shed, an iridescent $475-million multi-use arts complex in the towering new Hudson Yards development, which opened last year thanks to huge donations from Michael Bloomberg and Barry Diller. This sanitized enclave of New York City is a far cry from the one Rankine herself grew up in. At seven, she immigrated with her parents from Kingston, Jamaica, to the Bronx. Rankine describes her childhood as “kind of ordinary”; she played alongside Italian and Jewish children in a middle-class white neighborhood, where she says racism was palpable but mostly latent. She went to Catholic schools, then Williams College and Columbia University before embarking on a career of teaching and writing poetry that was in turns elegiac and piercing.

But her work took on a heightened urgency following the murder of James Byrd Jr. in 1998. That June, Byrd, a 49-year-old black man who lived in Jasper, Texas, accepted a ride home from an acquaintance and two other white men. The trio turned out to be white supremacists; they beat him, defecated on him, and dragged him behind a pickup truck for three miles along an asphalt road until he died.

“Even telling this story, you can tell that I’m ready to burst into tears,” Rankine says, her usually piercing eyes creasing at the corners. “I just thought, who are these people we live among? It changed my writing and my focus.”

Rankine grappled with the killing, as well as post-9/11 anxiety, in the 2004 mixed media work Don’t Let Me Be Lonely, which received widespread acclaim. In 2014, Citizen won the National Book Critics Circle Award in Poetry and became the only poetry book to be a New York Times bestseller in the nonfiction category.

Citizen’s success catapulted Rankine into exalted spaces. But she says her new titles and honors didn’t change the way strangers perceived her as a black woman: she still got cut in line, ignored by waiters and eyeballed suspiciously in stores. “These experiences are so ordinary at this point that they’re just part of what you work around to get to your next thing,” she says.

In 2016, 63 percent of white men helped vote Donald Trump into the Oval Office. With his election, an undercurrent of white nationalism that had always existed was thrust out into the open. In August 2017, hundreds of white supremacists marched on the University of Virginia campus in Charlottesville, chanting, “You will not replace us.” Online trolls spammed the review pages of films with non-white-male leads like Wonder Woman and Star Wars. White extremist gunmen perpetrated mass murders in places like El Paso and Pittsburgh.

In response to these personal and national threats, Rankine threw herself into studying the ways in which whiteness has shaped—and continues to shape—history, from suicide rates to the opioid epidemic. She read new works on the topic, like Robin DiAngelo’s White Fragility, and old ones from Toni Morrison and bell hooks. She initiated conversations with white men in airports and on airplanes while criss-crossing the country, listening to them as they talked about not seeing color or “Asians flooding the Ivy Leagues.” She read the mail that flowed in to excoriate and dismiss her.

Through all of this research, Rankine found that many white men misunderstand their privilege in several fundamental ways. First, their decisions and attitudes are shaped by a base assumption that “white and human are synonymous… that whiteness is a kind of generic state of being.” Second, many of them view privilege as a purely economic issue without thinking about the everyday indignities of possessing a darker skin tone. “A lot of people wrote to me, ‘You’re just as privileged as I am’—and it’s just not true,” she says. “They’re not thinking about the ability to leave their house without being surveilled—or the experience of walking into your own home and having a policeman called on you.”

Perhaps most crucially, Rankine watched as white men—even progressive ones—sought to absolve themselves of any personal responsibility in upholding racist structures. At book talks, Rankine would be approached by men who professed to love Citizen—but “still didn’t think they had anything to do with racism.”

“In their liberalness, their casualness, their quotidian mindlessness, they are always at the center of a racist gesture and racist violence,” Rankine says.

Rankine’s goal is not to demonize white men, but to challenge them to think about how each of their actions may feed into structural racism. She also hopes her work will give people the courage to start difficult conversations with strangers. “Given that race is the central issue in the United States of America, it’s insane that it’s not something we’re talking about all the time,” she says.

It seems like an exhausting existence—to constantly be reckoning with one’s own oppression. But for Rankine, “writing about painful reality is not actually what exhausts me—it’s having to live it,” she says. And she believes that this rigorous self-reflection is crucial to forging a different American future. “Seeing the same thing together—and understanding the bleakness of it,” she says, “is our first step towards change.” 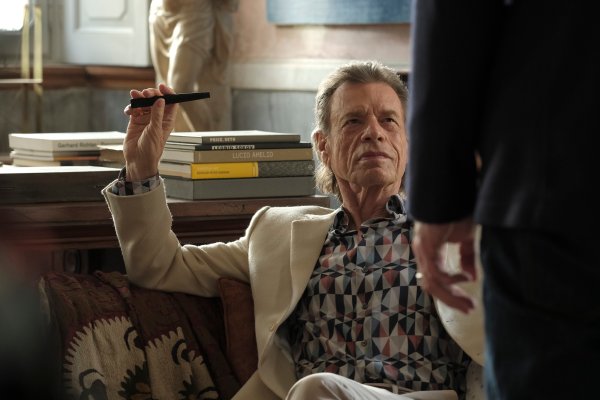 Mick Jagger Is Bewitching in The Burnt Orange Heresy
Next Up: Editor's Pick