President Donald Trump walks up to speak about Operation Warp Speed in the Rose Garden at the White House Washington, D.C., on Nov. 13.
Tasos Katopodis—Getty Images
By Brian Bennett

As a deadly new wave of COVID-19 infections surges in 46 states, President Donald Trump hasn’t attended a coronavirus task force meeting in months. The President has been largely silent about the renewed strain on hospitals. He hasn’t added his voice to pressure more state governors to require masks and distancing — moves his own public health officials say can save thousands of lives as the country enters a potentially deadly winter before a vaccine will be widely distributed. Vice President Mike Pence led a White House call with state governors on Nov. 17 about the coronavirus response. Trump didn’t attend.

For someone who is still the country’s President for another two months, and falsely insists he won the election, Trump is showing little interest in continuing to fulfill the duties of his office. “He’s never liked the subject, and he’s sitting there knowing that he lost the election because of it,” says a former White House official in close touch with Trump’s inner circle. “To the extent that he thinks he lost, he lost because of COVID.”

In the two weeks since Election Day, Trump has rarely appeared in public. Between false allegations of election fraud, he’s occasionally governed with his thumbs, firing by tweet his Defense Secretary and the senior cybersecurity official who disproved his election fraud claims, and, on Sunday, tweeting “Great job Emily!” at the government services administrator Emily Murphy, a political appointee who continues to block Biden’s transition in Washington. Trump’s ordered the military to fulfill his promise to pull thousands more troops from Afghanistan and Iraq by mid-January. So far this week, he’s has no public events scheduled. With control of the Senate hanging in the balance, he hasn’t made plans to help Republican candidates campaign for the runoff in Georgia on Jan. 5. Over the weekend, he went golfing—twice—and slowed the limousine along the way to waive to thousands of supporters marching in Washington to parrot his false claims of election fraud.

“There’s a little bit of a clash between Trump’s claim he’s serving four more years and his disappearance act,” says historian Michael Beschloss. “There’s no sign that Donald Trump is doing very much to be President” even as he insists he won a second term, he says.

On Nov. 13, Trump made his first appearance in front of reporters in a week, standing in the Rose Garden to tout his administration’s support for COVID-19 vaccine efforts. He didn’t take questions, or emphasize the steps Americans can take to slow the spread of the virus and save lives before a vaccine is available. Saying he won’t shutter businesses in a nationwide lockdown, Trump nearly acknowledged that his administration will be coming to an end. “I will not go — this Administration will not be going to a lockdown. Hopefully, the — the —whatever happens in the future — who knows which administration it will be? I guess time will tell,” Trump said. At the end of his remarks, Trump gave a brief nod to the surge in cases, saying, “We ask all Americans to remain vigilant, especially as the weather gets colder and it becomes more difficult to go outside and to have outside gatherings.”

The White House says the President is regularly briefed on the virus, but there is a lot to do. The federal government has paid for millions of doses of vaccines and faces a massive logistical challenge to work with state and local health departments to distribute them over the next several months. But it will be months or longer before enough of the population is covered by a vaccine for community immunity to kick in. In the meantime, the virus is ripping through the country again, putting a strain on protective equipment and hospitals.

In Harry Truman’s last days as President in January 1953, he continued to preside as Commander in Chief the U.S. forces in the Korean War. Lyndon B. Johnson was briefed daily on the Vietnam War until he left office on Jan. 20, 1969. Jimmy Carter, after being defeated by Ronald Regan, worked up to the minute before Reagan’s inauguration to free 52 American hostages held in the U.S. embassy in Tehran, napping in the Oval Office during his final night as President, Beschloss says. Iran freed the hostages the next day, on Reagan’s first day in office. And George H.W. Bush was disconsolate after losing his bid for a second term to Bill Clinton in 1992, but still appeared by Clinton’s side in the White House with a smile on his face on Nov. 18, 1992.

As the President stays largely in the wings on the COVID-19 fight, Dr. Deborah Birx and others in the White House are warning about a surge in the death toll that will follow in the coming weeks. Trump’s National Security Advisor Robert O’Brien released a statement on Monday, citing his own bout with COVID-19 in July, and encouraging “everyone to wear a mask,” keep distance and frequently wash their hands. The National Security Council posted five tweets on Monday about wearing masks to slow the spread of the virus.

A senior administration official says Birx and others are trying to convince “those in denial about how bad it is” to take steps to slow the spread. Part of that is to get messages through conservative media “about the usefulness of things like mask wearing,” the official says. One of their hurdles has been comments from Trump himself. The President has repeatedly piled on to misinformation about masks, falsely claiming on Oct. 15 that people wearing masks contract the virus at a higher rate, which is not true.

White House officials are trying to get conservative leaders to promote masks based on an updated study by the Centers for Disease Control and Prevention, which says community use of masks protects the wearer and others, reduces virus transmission and can prevent future lockdowns. Birx has been encouraging governors in states where cases are spiking to require masks and discourage large gatherings. Talking to a local news station in Salt Lake City, Utah on Nov. 12, Birx said large, extended families shouldn’t gather during the Thanksgiving and Christmas holidays until Utah flattens the curve of cases. “We can have those celebrations in the new year, and the end of the spring,” Birx said. 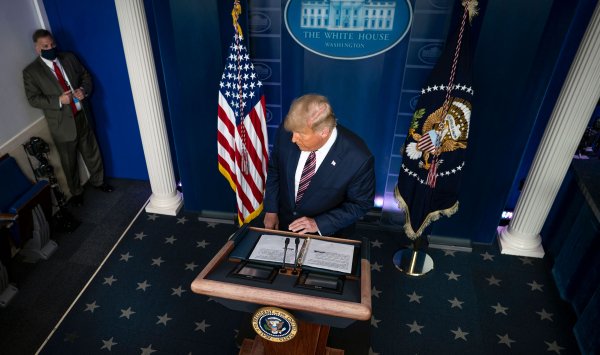 Why Trump Is Still Fighting the Election Results
Next Up: Editor's Pick