Donald Trump Is Starting to Catch On That He Lost — Maybe

U.S. President Donald Trump walks up to speak about Operation Warp Speed in the Rose Garden at the White House in Washington, DC, on November 13, 2020.
Tasos Katopodis—Getty Images
By Philip Elliott

The most curious headspace in Washington right now belongs to President Donald Trump. As a nation, we are watching a President process the stages of grief in real-time. As with many things Trump, that hasn’t necessarily been linear: the last several days, he’s seemed to swing between denial, anger, and back to denial again — with a fleeting moment or two of acceptance thrown in the mix.

Trump lost his re-election bid in voting that ended a little more than two weeks ago, on Nov. 3. He has brief flashes — and at least one tweet — of recognizing that former Vice President Joe Biden is coming back to the White House on Jan. 20. But more often, Trump seems defiant in the face of all the available evidence, and gentle nudging from fellow Republicans, that Biden has defeated him.

Trump has largely kept a low profile since newsrooms in near unison said on Nov. 7 that all of the numbers they had seen showed Biden the clear victor. Aside from his usual late-night tweets and some bizarre press stunts from supporters, Trump didn’t speak again until late Friday, when he ostensibly was updating the country on the coronavirus pandemic but accidentally betrayed his own doubts. During the briefing, Trump seemed to slip, saying “whatever happens in the future, who knows which administration it will be? I guess time will tell.”

A day later, he rerouted his motorcade en route to his golf course in northern Virginia to drive through a pro-Trump rally, full of supporters who insist Trump will remain in power for another four years. The signal from the White House to Trump’s fans was as clear as it was during Trump’s first debate with Biden: stand by for what comes next.

Yet a day after that, Trump seemed to acknowledge his loss in a tweet that drove newsrooms into overdrive. “He won because the Election was Rigged,” Trump tweeted. Was that what passes for a concession in 2020? Apparently not, we soon read, as his timeline continued to push false theories of voter fraud, manipulation and fabrication. By evening, he was once again promising he had bombshell evidence of electoral fraud that he would soon produce. As with so much of Trump’s bluster, it’s always a stay-tuned message that never has its loop closed.

Republicans in Washington and beyond are ready for this to be over. GOP support has started to fray in recent weeks for Trump, an unconventional politician who forged an unusual coalition for his adoptive party. Many politicians facing re-election down the road were wise to remember just how deeply Trump holds grudges and can marshal his supporters to exact revenge. Still, there is growing weariness with the whole drama of the Trump era. Privately, they’re ready to turn the page.

“I expect Joe Biden to be the next President of the United States,” Arkansas Gov. Asa Hutchinson told NBC’s “Meet the Press” on Sunday. “It’s important that we accept the outcome of the election.”

After saying Trump has every right in a democracy to challenge results in court, Ohio Gov. Mike DeWine told CNN’s “State of the Union” that “it’s clear that — certainly based on what we know now — that Joe Biden is the President-elect. For the country’s sake, it’s important for a normal transition to start through.” The next morning, Trump was taunting DeWine with a seemingly menacing tweet about a primary challenge. “Who will be running for Governor of the Great State of Ohio? Will be hotly contested!”

A group of 30 former lawmakers from the GOP wrote to Trump last week, urging him to knock off his allegations of voter fraud: “We believe the statements by President Trump alleging fraud in the election are efforts to undermine the legitimacy of the election and are unacceptable.”

Trump advisers are telling CBS News that he’s already mulling a rematch in 2024. Some expect, as reported by The New York Times, that Trump could launch his third presidential bid as soon as the Electoral College certifies Biden as the winner. Doing so would avail Trump of campaign funds to cover the cost of post-White House political staff, travel and merchandising. He already has launched a political action committee to keep involved in electoral fights, win or lose. His son, Donald Trump Jr., warned potential 2024 contenders to pick up their megaphones to support Trump now.

Still, tweets and tantrums don’t win electoral votes. Lawsuits don’t necessarily help either. Trump has lost the election. He seems to know it, even if it’s taking him longer than most to accept it. Some, like John McCain in 2008, were speedy in what most political practitioners point to as the textbook concession speech, immediately urging unity for the country’s sake. Others, like Hillary Clinton in 2016, waited until the next day — and, of course, faced criticism for not giving her speech in the immediate hours after a devastating loss. Even years after the 2012 concession call between Mitt Romney and Barack Obama, there remains a dispute over the actual wording Romney used, and whether it had racial overtones.

Still, though, there was a call. There has always been a call, usually arranged on the sidelines of a debate between the traveling aides to each candidate.

This time? Nothing so far. The fact that President George W. Bush, the only living former Republican President, congratulated Biden before Trump says just about everything you need to know about the man leading the Republican Party — for at least the next nine weeks, if not the next four years in exile. 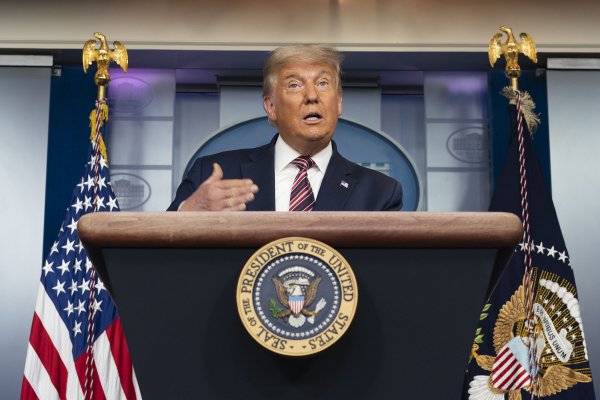 Trump Made the Economy His Message. Biden Won It
Next Up: Editor's Pick