President Donald Trump on Tuesday fired the director of the federal agency that had reassured Americans about the security of the 2020 election, contradicting his claims that his loss was the result of widespread voter fraud.

“The recent statement by Chris Krebs on the security of the 2020 Election was highly inaccurate, in that there were massive improprieties and fraud,” he tweeted on Tuesday evening, listing several baseless claims including that voting machines had changed votes to Biden and that scores of dead people had voted. “Therefore, effective immediately, Chris Krebs has been terminated as Director of the Cybersecurity and Infrastructure Security Agency.”

Trump was referencing a joint statement by a group of federal, state and industry election officials released last week by CISA, which is part of the Department of Homeland Security, declaring that “the November 3rd election was the most secure in American history” and refuting the president’s false allegations of widespread voter fraud.

“There is no evidence that any voting system deleted or lost votes, changed votes, or was in any way compromised,” the officials noted in a sentence that was highlighted in bold lettering for emphasis. It came just hours after Trump tweeted an all-caps claim that a voting company had deleted and switched votes that had been intended for him — a debunked conspiracy theory that has been making the rounds on right-wing media.

Krebs, who has been in the job since 2018, had reportedly told people close to him that he expects to be fired in recent days. He has received bipartisan praise for his role leading the two-year-old federal agency, which is tasked with protecting critical U.S. infrastructure from cyber threats. Another senior CISA official, Bryan Ware, who headed the Cybersecurity Division, submitted his resignation last week, reportedly because the White House asked for it, according to Reuters.

“Honored to serve. We did it right. Defend Today, Secure Tomorrow. #Protect2020,” Krebs responded on Tuesday night in a tweet from his non-government account.

Despite being part of the Homeland Security Department, an agency that has seen many of its missions politicized under the Trump administration, CISA has largely managed to avoid partisan politics while positioning itself as a trusted source on 2020 election security. While its assessments often contradicted Trump’s false claims on the dangers of mail-in voting in the months before the election, Krebs and other officials have taken pains not to explicitly correct him. “It’s not my job to fact check any candidate, certainly on the presidential ticket,” Krebs said during a pre-election media event on Oct. 30 when asked to respond to Trump’s voter fraud allegations.

That took a turn last week, when his statements — while not directly confronting or correcting the president — nevertheless seemed to become more pointed. He retweeted a post by another election expert that warned followers: “Please don’t retweet wild and baseless claims about voting machines, even if they’re made by the president. These fantasies have been debunked many times.” DHS watchers also noted the explicit bolding of last week’s statement, which emphasizes the part that directly refutes Trump’s claims.

Meanwhile, CISA’s “Rumor Control” website, which was set up to debunk election rumors and voting disinformation spread by both foreign and domestic actors, had basically become one massive fact-check of the false claims peddled by their boss.

The clash between the Trump White House and election security officials at DHS risks further politicizing cybersecurity, one of few issues in Washington that has consistently garnered bipartisan support, says Suzanne Spaulding, who led CISA’s predecessor under the Obama administration.

CISA officials “have kept their heads down and done what they knew needed to be done, and have not gotten hung up on the politics of it,” she tells TIME.  “The fact that we now have to worry that Chris Krebs could be fired for telling the truth is really chilling, especially for career officials who are still there, who for the next 60 to 70 days have to have this worry.”

As of early Friday, Krebs remained in his role, per a CISA spokesman, but news of his possible firing drew condemnation from Capitol Hill.

“Under Chris Krebs’ leadership, CISA has been a trusted source of election security information,” Sen. Ron Wyden, an Oregon Democrat, said in a tweet. “If Donald Trump fires him, it will suggest Trump is preparing to spread lies about the election from a government agency.” Sen. Amy Klobuchar, a Democrat from Minnesota, said that Krebs “goes to work every day to protect our country from Cybersecurity attacks, including our elections…firing him would be a gut punch to our democracy.”

“He is one of the few people in this Administration respected by everyone on both sides of the aisle,” Sen. Mark Warner, a Virginia Democrat, tweeted last week. “There is no possible justification to remove him from office. None.”

Republican lawmakers, many of whom have praised Krebs’ work in the past, have so far remained silent. Many of them have defended Trump’s baseless allegations of widespread voter fraud and a rigged election. Meanwhile, Trump on Friday morning seemed to take credit for his administration “making 2020 the most secure election ever” — echoing CISA’s statement — while also calling it a “Rigged Election!” in the same tweet.

Trump has refused to concede the election, and has not acknowledged Biden as the winner. The former Vice President was projected to have won the election on Nov. 7. He has spent the week alleging a range of voting irregularities on Twitter, claiming that they swung the election to his opponent. His campaign has called for recounts in several states and filed more than a dozen lawsuits in various state and federal courts. None of them would shift enough votes to change the outcome of the election.

“While we know there are many unfounded claims and opportunities for misinformation about the process of our elections, we can assure you we have the utmost confidence in the security and integrity of our elections, and you should too,” election officials ended their statement last week. “When you have questions, turn to elections officials as trusted voices as they administer elections.” 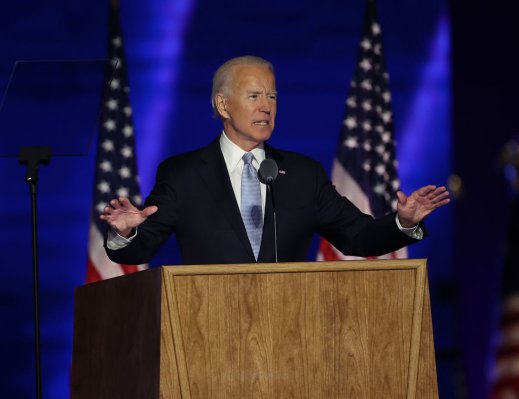 Joe Biden's Electoral College Path to the Oval Office
Next Up: Editor's Pick