Russian President Vladimir Putin has so far kept his silence on President-elect Joe Biden’s victory in the November election. But other Russians have not been so circumspect. Opposition leader Alexei Navalny, still in recovery from being poisoned with a military grade nerve agent in August, congratulated Biden in a Tweet on Nov. 8. He praised the “free and fair elections” in the U.S, pointedly describing them as a “privilege which is not available to all countries.”

When Biden enters the White House in January, Russia’s embattled opposition figures want the U.S. President to more forcefully confront the Putin regime with more rigorous and widespread sanctions in order to help them rebuild democracy in Russia. Vladimir Kara-Murza, a Russian democracy activist and chair of the Boris Nemtsov Foundation, tells TIME that “It’s only for Russians to bring democracy to Russia. But the president must stop legitimizing and enabling [a] Putin regime that flouts and violates democratic norms. Frankly, it’s something no U.S. president in 20 years of Putin’s power has done.”

For the past four years, the U.S. approach to Russia has been alternately punitive and permissive. The U.S. Congress has responded forcefully to Russia’s interference in the 2016 U.S. presidential elections, slapping sanctions on dozens of Russian entities and individuals for election meddling and other malign activity. Yet at the same time Trump has praised Putin for his leadership style, suggested Russia be restored to the G7 group of countries, and even questioned his own intelligence services during a joint press conference with the Russian president.

Critics say that Trump’s behavior has routinely undermined the U.S. sanctions policy on Russia. The White House has “in many ways signaled that there will be no consequences for Russia for human rights abuses,” says Edward Fishman, former member of the U.S. State Department policy planning staff. Unlike many world leaders, Trump failed to condemn Russia over the poisoning of Navalny and unlike the U.K. and E.U., he did not place consequent sanctions on Russia. (Navalny said Putin was behind the attack, but the Kremlin denies any involvement.) That reaction “was particularly egregious,” says Fisher.

Biden, meanwhile, did condemn Russia over the attack against Navalny and said Trump’s “silence is complicity”. In March he pledged to “impose real costs on Russia” for its transgressions at home and abroad, and to “stand with Russian civil society.”

A good place for the Biden Administration to start, says Kara-Murza, would be to sanction six Kremlin officials that the E.U. has already sanctioned over the poisoning of Navalny and other senior Russian officials under the Magnitsky Act.

Signed by the Obama Administration 2012 — and named after a lawyer, Sergei Magnitsky, who died in jail after testifying about Russian government corruption — this act sanctions Russian perpetrators of human rights abuses and corruption, including freezing access to their stashes in America’s banks and real estate, and banning their entry to the U.S. “A defining feature of the Putin regime is the astonishing hypocrisy where you have the same people who abuse and attack the most basic norms of democracy in Russia, then come to the West and want to enjoy all the benefits and privileges that these same norms of democracy offer in Western countries.” he says.

Russian officials and businessmen have long chosen London, New York and Miami among their preferred destinations to stash their money, buy luxury property and educate their children. A three year long investigation by Organized Crime and Corruption Reporting Project (OCCRP) and Russian investigative news site Novaya Gazeta revealed in 2017, that hundreds of millions of Russian laundered dollars slid into vaults in the West, including some $63.7 million in U.S. banks such as CitiBank and Bank of America.

While the U.S. has “by any objective measure” been successful in imposing the Global Magnitsky Act, which applies to all foreign human rights abuses and corrupt officials, it has been “wrong” not to sanction more Russians under the Magnitsky Act, says Bill Browder, CEO of Hermitage Capital. Browder was Magnitsky’s client in the corruption case surrounding his death, and has been campaigning against corruption and human rights abuses in Russia ever since. Under Obama, such sanctions were introduced on a yearly basis, but under Trump there were no new sanctions in 2018 or so far this year, says Browder.

At least 50 Russian officials have been targeted by the U.S. through the Magnitsky Act. But there are many more eligible candidates, activists say, including propagandists like the head of Russia Today, Dmitry Kiselyov, who led a vilification campaign against Putin’s opponents, such as the now-murdered Boris Nemtsov. “The evidence is plentiful. The legislative framework is in place. All that’s needed is political will,” says Kara-Murza.

Browder expects that Biden will ramp up the pressure on Putin over his human rights record. “I think it’s going to be a big theme,” he says. Analysts including Tatiana Stanovaya, CEO of R.Politik, a political analysis firm, agrees. “Russia expects Biden to tighten sanction policies and react more fiercely to human rights abuses,” she says. And that might help to explain the Kremlin’s silence on Biden’s win. “The Magnitsky Act was one of the most upsetting things to happen to Putin in his dealings with the U.S.”, says Browder.

But not everyone sees sanctions as a priority. “They’re not a silver bullet,” says Vladimir Ashurkov, Executive Director of Russia’s Anti-Corruption Foundation. While personal sanctions can be “quite helpful”, they are not particularly “effective instruments” at bringing about “long term, lasting change” in Russia in terms of restoring civil freedoms or media freedom, he says. “The most important aspect of U.S. foreign policy as it relates to Russia is the restoration of the U.S. as a global power promoting democracy and human rights, and strengthening Transatlantic relations through NATO,” says Ashurkov.

Cracking down the flow of corrupt Russian money into the West will take more than just individual sanctions, Ashurkov says. “Tackling the network of enablers – financiers, bankers, lawyers, etc. – used by the dirty money will have a much stronger effect, but it requires a lot of political will,” he says. The E.U. recently introduced new anti-money laundering directives and analysts say now it’s time for America to step up as well. Nigel Gould-Davies, former Head of the British Embassy’s Economic Section in Moscow and a former ambassador to Belarus, says “It’s not enough for the West to try to resist Russian influence with traditional diplomatic and military means. It has to protect its own systems from the malign effects of foreign money,” he says.

For the Russian opposition, 2024 will be the year when Biden’s promise for a tough stance on Russia will be put to the test. In the spring of that year Russia will hold presidential elections. Following a constitutional reform in July that the European Parliament said was “enacted illegally,” Putin has been granted the right to hold the presidency beyond his final mandate in 2024. “These amendments are null and void,” says Kara-Murza.

If Putin tries to cling onto power beyond the end of his current term, as most expect him to, he should become as illegitimate as dictators like Belarus’ Alexander Lukashenko and Venezuela’s Hugo Chavez, he adds, both of whom are illegal leaders in Washington’s eyes. “There must be a very clear public policy of non recognition on the part of the free world, of course led by the U.S.,” says Kara-Murza. 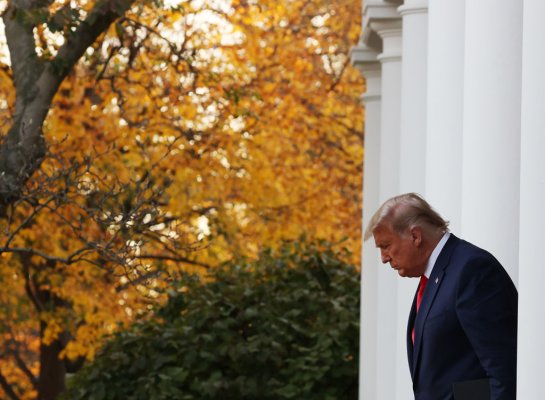 The Stages of Trump's Grief
Next Up: Editor's Pick