A video grab made on Oct. 6, 2015, shows an image taken from footage made available on the Russian Defense Ministry's official website on Oct. 5, purporting to show a Russia's Su-24M bomber dropping bombs during an airstrike in Syria.
Russian Defence Ministry/AFP/Getty Images
By Simon Shuster

On Sunday night, during an appearance on a prime-time political talk show, the Russian lawmaker Semyon Bagdasarov offered a curious interpretation of his nation’s history. The roots of Russian civilization, he suggested, trace all the way back to Syria, without which Russia would never have existed in the first place. “This is our land,” he said of the Arab Republic. “These are our holy places!” Urged along by the prompters in the studio, the audience gave him a round of applause, while the host of the show had this reaction: “I think we have a new slogan!”

Over the past week, as Russian jets have flown dozens of bombing raids against rebel positions in Syria, the search for a slogan that might justify this military effort has strained even the flimsy principles of Kremlin propaganda, not to mention the credulity of its consumers. Compared to the war in neighboring Ukraine, which Moscow had little trouble casting as a defense of “indigenously Russian lands,” the Syrian entanglement is shaping up to be a much more difficult sell.

A nationwide poll taken in late September, about a week before the Russian bombing raids began, suggested that Russians would have no stomach for a war on such a distant front. Nearly 70% of respondents in the survey, which was published on Sept. 28, said Russia should not provide direct military support to its Syrian allies, and only 14% said they would approve of such an intervention.

Two days later, when that intervention began, few in the Kremlin would have lost much sleep over the question of popular support. The approval ratings of President Vladimir Putin still stand above 80% in all the major polls, and he has total control of nearly all the mass media in Russia. So the men in his circle tend to take it for granted that they can shape public opinion as expediency dictates. “The national mission can change in three days flat,” one of Putin’s advisers told me this spring during an off-the-record briefing in Moscow. “All you need to do is change the propaganda and offer some arguments.”

But solid arguments have been hard to find in the Kremlin’s domestic messaging on Syria so far. Most of the spin has derived from Putin’s claim at U.N. General Assembly last week that the terrorist threat from the Islamic State in Iraq and Syria (ISIS) is similar to the threat that Nazi Germany posed 75 years ago. Such invocations of the fascist menace served Russia well during its invasion of Ukraine last year, as Putin managed to convince many of his countrymen that ethnic Russians in Ukraine were under threat from “neo-Nazis and anti-Semites.”

On Sunday evening, this point came up again during the weekly monologue of anchorman Dmitry Kiselyov, who said the ISIS-Nazi comparison offers a “very precise” rationale for the Russian bombing of Syria. Then he tried to push it further. “What this means is that Russia is saving Europe from enslavement and barbarism for the fourth time,” he declared. “Let’s count! The Mongols, Napoleon, Hitler, and now ISIS.” His list ignored the fact that Ghengis Khan, Napoleon Bonaparte and Adolf Hitler all invaded Russia first, whereas no attacks on Russian soil have yet been attributed to ISIS.

Nor is there any ethnic Russian minority in Syria for Putin to defend, and the idea of intervening in the affairs of an Arab nation also sounds deeply hypocritical coming from Moscow, which has spent more than a decade deriding the U.S. and its allies for such meddling. In a manifesto on foreign policy that he published in 2012, Putin specifically urged the U.S. and its allies not to get involved in Syria. “I just can’t understand where this militaristic itch comes from,” he lamented. “Why can’t they find the patience to work out a balanced and collective approach?”

Judging by events in Ukraine and Syria, it did not take Putin long to contract that itch from his Western counterparts. But the reason is not some war-loving turn in the Russian mentality. On the question of foreign entanglements, Russians tend to be insular and pragmatic, with domestic issues like poverty, inflation and corruption consistently topping questions of international affairs in the list of the public’s concerns. In late August, when the Levada Center asked respondents to name Putin’s greatest achievements, the two top answers were economic development and improvements in the standard of living.

On these two fronts, however, Putin has lately had little to brag about. The country is in the middle of a deep recession, thanks largely to a sharp drop in the oil price and the Western sanctions imposed against Russia over its harassment of Ukraine. The value of the national currency, the ruble, has meanwhile dropped by half since Russian annexed the region of Crimea, and inflation has shot up to almost 16%.

The daily images of carnage and destruction in eastern Ukraine have helped the Kremlin’s TV networks distract Russians from the awful state of their economy over the past year and a half. But this spell had begun to wear off, and Putin’s ratings had started to suffer, falling in September to 84% from a peak of 89% in Levada’s latest polls.

Valery Fyodorov, one of the Kremlin’s leading sociologists, even acknowledged during a TV appearance on Friday that only about a quarter of Russians are still paying close attention to the conflict in Ukraine. “It’s no longer the kind of information narcotic that you can’t go a day without,” he said. But before he could finish his segment, the broadcast cut to some crisp footage of Russian warplanes dropping bombs over Syria. They looked intoxicating enough, even without a good explanation, for many viewers to get hooked. 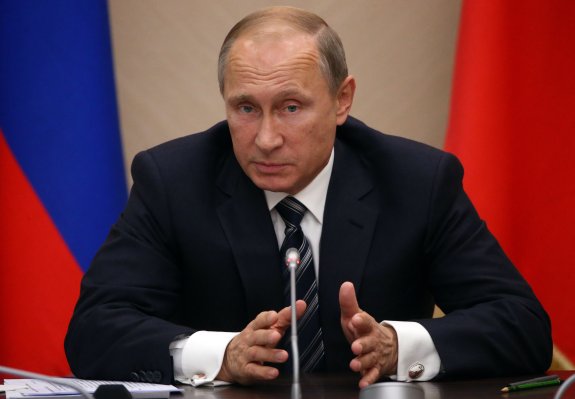 These 5 Facts Explain Putin's War in Syria
Next Up: Editor's Pick