Jennifer Keishin Armstrong knows everything about Sex and the City — she literally wrote a book on it.

Armstrong’s book Sex and the City and Us — out June 5, a day before the 20th anniversary of the show’s HBO debut — delves into the making of the boundary-breaking series. Armstrong, a journalist and author who has also written books on other TV shows including Seinfeld and The Mary Tyler Moore Show, interviewed nearly everyone connected with Sex and the City — the leading ladies, series creator Darren Star, costume designer Patricia Field and the entire writing crew — to glean details on everything from the writer whose real-life battle with breast cancer inspired that Samantha Jones season 6 plot arc to how Carrie Bradshaw’s infamous “naked” dress came to be.

Armstrong spoke to TIME about her thoughts on Sex and the City‘s current relevance, the one big pitfall the writers should have corrected and why her answer to “Which one of the ‘girls’ are you?” has changed.

To me, a huge theme of this was the power of women telling their own stories. Men were in charge of the show, but the whole rest of the writing staff was female, which was very unusual at the time. Candace Bushnell told her story [in her weekly column], then these women told their stories, and that’s why it felt so real to us watching.

You write about your own “Mr. College,” a boyfriend who proposed to you when you were in your 20s and living in New York City. You said yes, but later turned him down. How did the show change how you felt about relationships and where you saw yourself going?

There’s no point in talking about a show unless it changed real-life everyday stuff for people. That’s the ultimate test for a show and this one probably did it more than any [for me]. I felt like it was modeling a way out for me that I didn’t quite know I had. I really wanted to share my story. It was a combination of having moved to New York City around that time and watching the show. The more that my real life started to merge with that vision — as I was going into the city more, I was going out more — that was when I was like, “Oh, I could see myself in them.” I wasn’t wearing Manolos and drinking cosmos every night. But that really wasn’t the point to me. It was about women living life on their own terms. There are people who literally moved to New York City because of Sex and the City.

How do you think #MeToo would have impacted Sex and the City?

Our attitudes with a bunch of things that this show covered have shifted. They didn’t really tackle sexual violence or even harassment for a show that’s about sex — it was very positive. I think that that was for a good reason at the time. Subconsciously, this show was supposed to be liberating. It was supposed to show that women could be independent and have sex drives and have lives on their own terms. The last thing you want to do is [say], “And sometimes terrible things happen.” We’d be talking more about #MeToo issues. We’d also be talking more about gender spectrum issues and sexuality spectrum issues. But it’s so hard to talk about that, too, because it paved the way for everything that came after. It did its best.

Diversity was always a big problem they could have addressed at the time.

While it’s incredible that it was a female-heavy writing staff, it was all white. It’s harder to do those story lines when you don’t also have diversity behind the scenes, because people get skittish and they’re not sure how to tackle them. As I talk about in the book, the time they tried with the episode where Samantha dates a black man didn’t go great. It also shows how hard it is to turn a ship around — [diversity] should be built into the DNA.

We all see ourselves in some version of these four women. Which one of the “girls” do you think you are and why?

Like many people — this was very common at the time, and especially because I lived in New York City and was a journalist — I thought I was a Carrie. And I probably was. A lot of people talk now about how terrible she is, and I was sort of terrible, too. It’s an immaturity thing — you don’t really know what you’re doing. I have this idea that we all start out identifying as Carrie, and as we get older, we become Mirandas. Which I definitely feel like I am now. I’ve noticed in doing research and paying a lot of attention to Sex and the City now that a lot of younger women who are picking up the show are identifying with Miranda because we’ve shifted our values and the way we think of women. Most people get it right away, like, “No, I should want to be the smart, successful, feminist one. Who cares what Carrie is wearing?” It’s really heartening.

You discuss the ongoing feud between Sarah Jessica Parker and Kim Cattrall in your book. What do you think about their public conflict?

It’s a little bit of a bummer because it messes with people’s perception of the show. When you work with somebody for a really long time — and, as they even said, aren’t best friends — there’s a point at which perhaps you would like to move on and do other things with your life. We’re all humans. We have to deal with the fact that those are fictional characters and the [actors] don’t have the same relationship.

Cynthia Nixon is now running for governor of New York. What do you think of that?

A million people have already made the joke online that this is the Sex and the City finale we deserved. To have one of these women run for office in a year when we have record numbers of women running feels so good. It feels so right. She does speak to women — and that’s incredibly important, especially right now. 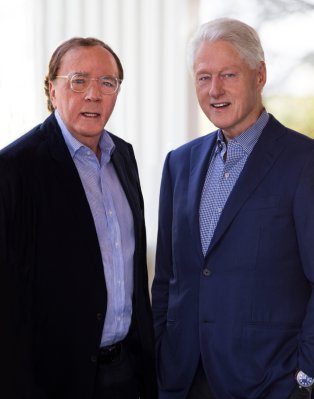 Bill Clinton and James Patterson’s New Novel Is Worth a Read—But Not Just for the Plot
Next Up: Editor's Pick