By Emily Barone and Elijah Wolfson

After nearly four days of ballot counting, the United States has a new President-elect. On Nov. 7, at approximately 11:25 a.m. E.T., the Associated Press called the state of Pennsylvania for former Vice President Joe Biden, giving him 284 elector votes pushing him past the required 270 and into position to become the next U.S. President. About an hour later, the A.P. also called Nevada for Biden, adding six more votes to his total.

An unprecedented election has come to an unprecedented conclusion: sitting President Donald Trump has not conceded the victory to Biden, and his campaign has said it intends to file further legal challenges in many of the states that Trump won in 2016, but lost in 2020. The Trump campaign has already filed a number of lawsuits and some, including ones in Michigan and Georgia, have already been dismissed.

Biden’s victory was far from a blowout; incremental improvements over Hillary Clinton’s 2016 performance at the polls in a handful of states made all the difference.

This was enough to get Biden past Trump, but just enough—and far less dominant than many expected based on polling numbers.

Americans were already wary of polls in the lead-up to 2020; Trump’s victory in 2016 was a surprise to many who had been following his lagging popularity—at least based on polling data—prior to the election. Those polls turned out to be off-base for a number of reasons, including the extent to which undecided voters favored Trump.

But at the state level, the polls missed the mark: the AAPOR’s analysis of 423 state-level polls completed within 13 days before the 2016 election found a 5.1 percentage-point error, on average. This discrepancy is the absolute value of the difference between the margin of victory in the election and the margin of support in the polls. The error was larger in non-battleground states (6.4 points) than in swing states (3.6 points), but that degree of inaccuracy was enough for the polls to call the wrong winner in some key states.

From what we know so far—given that votes are still being tallied—the 2020 state polls more reliably predicted the winner. But the margins in some states are just as off as they were four years ago. In Wisconsin, for instance, Clinton lost by a hair and Biden squeaked a win, even though polls predicted a landslide for both Democrats. In Iowa, too, the polls had indicated narrow Trump wins, but he had overwhelming victories there in both years.

FiveThirtyEight founder Nate Silver, who relies heavily on polls to make election forecasts, noted in an interview with ABC on Nov. 5 that the polls fell short in both 2016 and 2020, but that because Biden’s lead was more robust than Clinton’s, he “could have afforded a 2016-style polling miss and probably still won.” Indeed, it’s looking that Biden has narrowly won states like Michigan, Pennsylvania and Wisconsin that Clinton lost by a hair.

It will take a more forensic analysis later on, when final, official tallies have been reported, to know for certain, but it’s possible that these narrow victories were driven by the fact that Americans cast more ballots in this election than any election in recent decades, both in terms of the total number of voters and the percent of the electorate.

Models from Bloomberg; CNBC and the United States Elections Project estimate that around 160 million total votes will eventually be tallied. If true, that turnout rate would represent some two-thirds of eligible voters, the highest turnout in 120 years, according to Michael McDonald, a political science professor who heads up the Election Project at the University of Florida.

As of 12:30 p.m. on Nov. 7, more than 148 million votes had been counted. Overall, the average turnout is 64% across all states thus far, with Minnesota, Wisconsin and Maine topping the list 75% or more. All but 8 states had eclipsed 2016 turnout rates and all but 12 states had surpassed 2008—the last high-watermark year in modern election history when Barack Obama defeated John McCain. The chart below shows the historical trends among key swing states in presidential elections going back to 2000.

High turnout is a sign of a healthy democracy. This year, the outsized participation rate is partly a result of an impassioned electorate and partly a result of the pandemic: Safety modifications such as expanded early and mail-in voting made the democratic process more accessible. The massive influx of mailed ballots triggered scrutiny of the USPS prior to the election and slowed the vote counting process. But even though the total turnout won’t be known for weeks, the historical significance of this election is already secured. 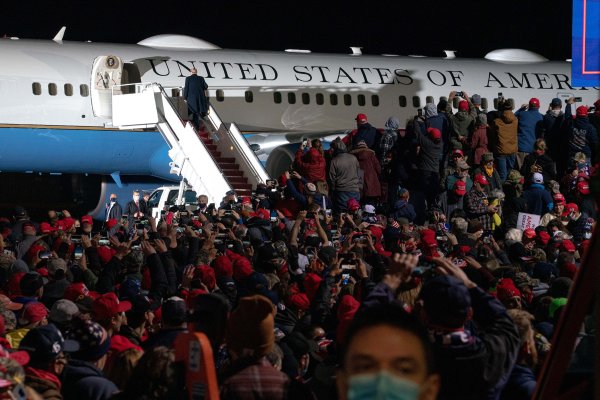 How Donald Trump Lost The Election
Next Up: Editor's Pick