Why Fears of Post-Election Chaos Are Overblown

Representative Mark Pocan spends a lot of time lately trying to talk his constituents off the ledge. They’re terrified President Trump is somehow going to steal the election, says Pocan, a liberal Democrat from Madison, Wis.

“Literally daily I get this question,” Pocan says. In anxious tones, they ask about all of the election-related lawsuits, ballot deadlines, Electoral College technicalities and state-level hijinks. “People are so nervous, because they think this guy will do anything to stay in power,” he says.

Just 22% of Americans believe the election will be “free and fair,” according to a September Yahoo News/YouGov poll, compared with 46% who say it won’t be. The sense of worry is understandable. The President has sown doubt with groundless talk of a “rigged” election and repeated refusals to commit to a peaceful transfer of power. The COVID-19 pandemic has transformed voting procedures, while the charged political climate has focused attention on the mechanics of an electoral system that’s shaky, underfunded and under intense strain. It would be naive to predict that nothing will go wrong.

But for many people, these reasonable concerns have hardened into terror that a constitutional crisis is all but inevitable and that it will make the debacle in Florida in 2000 look like a walk in the park. That, experts say, is not the case. There are worst-case scenarios, and the President’s conduct has made them less unthinkable than usual. But the chances of their coming to pass are remote. Benjamin Ginsberg, who represented the GOP candidate in the 2000 recount, cautions against hysteria. “The panic seems to me to be way overblown,” he says.

What exactly are the worst-case scenarios? They start with the absence of a clear outcome on election night. Many states will be dealing with a massive increase in mail and absentee ballots, which take longer to process than in-person votes: they have to be removed from their envelopes, flattened for tabulation and checked for signatures and other technical requirements before they can be counted. Polls show Trump’s disdain for mail ballots has led to a large partisan divide when it comes to voting methods: far more Republicans plan to vote on Election Day, while Democrats are more likely to vote by mail. If the tally is close, the delay could allow Trump to baselessly claim that a surge of Democratic mail ballots in the days after Nov. 3 are fraudulent and shouldn’t be counted.

Three states loom largest in this concern: Michigan, Wisconsin and Pennsylvania. All three are key battlegrounds that have made a rapid and politically fraught push to expand voting by mail this year. All have Democratic governors and Republican legislatures that have fought bitterly over election rules in state and federal courts. All have a limited ability under state law to count or process mail ballots before the polls close. Other quirks, like a “naked ballot”–a legitimate ballot that a voter has failed to enclose in the required security envelope–may cause further uncertainty; a Pennsylvania court ruled this year that such ballots would not be counted in that state, which Trump won by just 44,000 votes. It all could add up to a presidential race that’s too close to call for days or weeks.

But for these delays to matter, the tally would have to be very close, and the presidential race would have to hinge on those three states. Current polls do not show a particularly tight race in those states, nor nationwide. And the polls have been far more stable, with far fewer undecided voters, than they were in 2016. Faster-counting states like Florida and Arizona, which have demonstrated the ability to rapidly tabulate large volumes of mail ballots, could well decide the election, rendering any uncertainty in the Rust Belt irrelevant.

Still, suppose we do end up in a version of the worst-case scenario. The election’s outcome is unclear after days or weeks, and Trump is muddying the waters–lobbing lawsuits, disputing the count, accusing his opponents of cheating and convincing large swaths of the electorate that something untoward is going on behind the scenes. Mainstream media outlets and independent analysts urge caution or project a Biden win, but Trump calls it a left-wing coup and refuses to concede. Conservative media, fellow Republicans and even the Department of Justice, all of which have enabled Trump’s norm busting for the past four years, back him up. Partisans take to the streets. America plunges into uncertainty.

Even if this happens, experts stress that Trump does not have the power to circumvent the nation’s labyrinthine election procedures by tweet. Elections are administered by state and local officials in thousands of jurisdictions, most of whom are experienced professionals with records of integrity. There are well-tested processes in place for dealing with irregularities, challenges and contests. A candidate can’t demand a recount, for example, unless the tally is within a certain margin, which varies by state. “The candidates themselves have almost no role in this process,” says Vanita Gupta, president of the Leadership Conference on Civil and Human Rights and a top Justice Department official in the Obama Administration. “While people may make claims to powers and make threats about what they may or may not do, the reality is that the candidates don’t have the power to determine the outcome of the election. It’s really important that voters understand that while a lot about our system is complicated, this isn’t a free-for-all.”

Whether or not Trump concedes has little bearing on the election’s resolution. Nor can he or any other candidate simply decide to put the election in the hands of the Supreme Court, as Trump has alluded to and liberals have fretted about. There’s a legal process to get there. The oft-invoked Bush v. Gore, the Supreme Court case that resolved the 2000 standoff, was decided narrowly, specific to a particular situation in a particular place, notes Joshua Geltzer, executive director of the Institute for Constitutional Advocacy and Protection at Georgetown Law. “These things Trump is saying–toss all the ballots, end the counting–those are not legal arguments,” he says.

Some fear a scenario in which, after weeks of uncertainty, the time comes for states to name electors to the Electoral College, and Republican legislators try to appoint their own rosters, overruling their state’s voters and forcing courts or Congress to resolve the matter. But experts point to the 1887 Electoral Count Act, which Congress passed to prevent a repeat of the “dueling electors” of 1876. “It’s unthinkably undemocratic to hold a popular vote for President and then nullify it if you don’t like the result,” says Adav Noti, chief of staff at the nonpartisan Campaign Legal Center. While the possibility can’t be entirely dismissed given Republicans’ fealty to Trump, judges would likely take a dim view of such an effort, not to mention the political storm that would ensue. “It’s pretty clearly illegal under federal law, and it almost certainly would violate the constitutional rights of the voters,” Noti says. “They may try it, and it would be a serious situation, but I don’t think it would succeed.”

The past few years have convinced many Americans to expect the unlikely, haunted by failures of imagination past. But when it comes to post-election mayhem, people’s imaginations may be getting the better of them. Hyping far-fetched scenarios has a pernicious effect: it erodes people’s confidence that their vote will count, dampening the shared trust essential to democracy. “Supposing Armageddon comes, you do want people having thought of it,” says Ginsberg, the GOP election lawyer. “But by amplifying it as if it’s realistic, you create a very real problem of people not having faith in the system by which we choose our leaders. And that’s really harmful.” 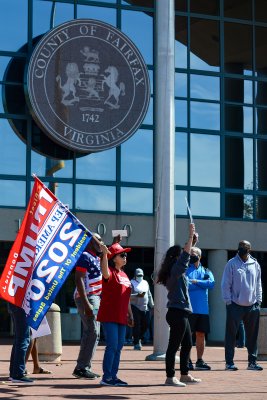 Trump’s Calls for an “Army” of Poll Watchers Are Renewing Fears Of Voter Intimidation
Next Up: Editor's Pick