A protest in Kolkata against the alleged rape, torture and murder of a 19-year-old Dalit woman in Hathras district of Uttar Pradesh, India.
Debarchan Chatterjee—NurPhoto/Getty Images
By Billy Perrigo

On Sept. 29, a 19 year-old woman died of injuries after she was allegedly gang raped by a group of men in a field in Hathras district, in the north Indian state of Uttar Pradesh. She was a Dalit, member of a community at the bottom of India’s rigid caste hierarchy, while the four alleged perpetrators, who have been arrested and charged with murder and rape, are members of a dominant upper caste.

The woman had spent two weeks fighting for her life in a Delhi hospital after the alleged gang rape on Sept.14, which left her with severe damage to her spinal cord. (The woman has not been named in the Indian press due to a law that prohibits identifying the victims of sexual violence.)

The night of her death, police returned to the family’s village with her body. But instead of handing her over to her mourning family, the family has said the police insisted she be cremated there and then. When the family refused, saying they wanted time to say goodbye, police locked them in their home and took her to a field where they burned her body using gasoline, the family said.

Read More: ‘Nothing Has Changed.’ 7 Years After a Gang Rape That Shocked a Nation, Brutal Attacks Against Women Continue

In 2014, Prime Minister Narendra Modi came to power with a pledge of “zero tolerance” toward violence against women, after the gang rape and murder of a 23 year-old woman in Delhi in 2012 shocked the nation. But India is still the most dangerous country in the world to be a woman, according to a 2018 survey of experts by the Thomson Reuters Foundation, citing sexual violence, cultural traditions and human trafficking as the main reasons for the ranking. In 2019, there were an average of 87 reported rape cases per day, according to official statistics.

The problem is even more pronounced for Dalits. More than 3,500 were raped in India in 2019, an increase of 18.6% compared to 2018. But the real number is likely far higher, says Kiruba Munusamy, a Dalit lawyer who works on caste discrimination and gender violence cases. “The upper caste groups use sexual violence as a tool, to reinforce their caste hegemony, and their caste supremacy,” Munusamy says. “And for that reason, many families are afraid to go even to the police station.”

The Hathras case sparked protests across the country, including in Delhi.

Once known by the outdated term “untouchables,” Dalit is a broad term for the communities at the very bottom of the Hindu caste system. There are 200 million Dalits in India, and although caste discrimination was legally outlawed in India’s 1950 constitution, systemic discrimination against them remains widespread. The Hathras victim was reportedly from the Valmiki community, a caste which is considered “lowest in hierarchy” even among Dalits in Uttar Pradesh, according to Suryakant Waghmore, author of Civility Against Caste.

Many Dalit activists see the Hathras case as a particularly brutal example of how Dalit women are not only regular victims of sexual violence in India, and an example of how the state is often complicit, making it difficult for victims to get justice.

A protester holds a sign reading "Dalit Lives Matter" at a protest against the Hathras gang rape, in Guwahati, Assam, India on October 3, 2020.
David Talukdar—NurPhoto/Getty Images

The victim first told police she was raped on Sept. 14, shortly after the attack, according to videos taken shortly after at the scene of the crime, seen by the BBC. But her allegations of rape were only recorded by police eight days later on Sept. 22, after she made what’s known in India as a “dying declaration,” identifying the four men she said had assaulted her. After her death on Sept. 29 police cited a forensic report, later discredited by doctors, that said the girl was not raped. A PR firm working for the Uttar Pradesh state government pushed the line to the media, calling the case a “conspiracy to push the state into caste turmoil,” according to Indian media reports.

The behavior of the police and state government, activists say, is a clear example of systemic discrimination. “People don’t really accept when you say that Dalits are discriminated on a day to day basis because of caste,” says Munusamy. “But the Hathras case is something tangible.”

India’s rape problem gained international attention in 2012 when a woman was violently gang-raped and murdered on a bus in Delhi. The victim, named “Nirbhaya” (fearless) by the Indian media due to laws against identifying rape victims, died in a hospital in Singapore two weeks later, after being flown there by the Indian government.

Dalit rights activists say that while both cases were terrible crimes, the difference in the state’s treatment of the two victims reveals something about caste. “The Hathras offense was very similar to Nirbhaya,” says Munusamy. “In the case of Nirbhaya, the state tried its best to make her survive. But in the case of Hathras, she was admitted to a local hospital. Even after she died, she was not given the respect of her body.” (The Hathras victim was treated in Aligarh hospital in Uttar Pradesh; she was transferred to the same hospital Nirbhaya was treated at in Delhi one day before she died.)

In the aftermath of the Nirbhaya case, many called for sentences for rapists to be made more stringent. Four of the six accused in that case were executed by hanging in March 2020.

But activists say stricter punishments have failed to address the root cause of the crime. “All too often lawmakers in India hold up the death penalty as a symbol of their resolve to tackle crime. But what is actually needed are effective, long-term solutions like prevention and protection mechanisms to reduce gender-based violence, improving investigations, prosecutions and support for victims’ families,” said Avinash Kumar, the executive director of Amnesty India, in a statement in March. (In September, Amnesty India was forced, by legal pressure from the Indian government, to halt all its human rights operations. It had released many reports criticizing the government for human rights violations.)

The aftermath of the Hathras victim’s death

Tanushree Pandey, a journalist from India Today, was at Hathras when police returned to the village with the victim’s body. Her videos from the scene, posted in real time to Twitter as police cremated the victim without her family present, brought wider attention to a case that activists say would likely otherwise have gone unrecognized.

The following day, Uttar Pradesh chief minister Yogi Adityanath said he had spoken with Prime Minister Narendra Modi about the case. In a Sept. 30 tweet, Adityanath reported that Modi had “said that strict action should be taken against the culprits.” Meanwhile, however, police officers (who report to Adityanath’s office) had barricaded entry to the village where the rape took place.

Police barricading on the way to the home of the victim in the Hathras gang rape case on October 1, 2020 in Hathras, India.
Amal KS—Hindustan Times/Getty Images

The next day, when the leaders of the main opposition party, Rahul and Priyanka Gandhi, tried to travel to the village to meet with the family, video showed police pushing Rahul to the ground. The pair were briefly arrested. The same day, Uttar Pradesh police claimed that according to a forensic report, no rape had taken place and that the victim had died from being strangled. The state government pushed this line to media through a PR agency. But the forensic examination was only conducted eight days after the assault—too late, according to guidelines, for an accurate conclusion of rape to be drawn.

On Oct. 2, police allegedly assaulted the victim’s uncle and intimidated the family in an attempt to stop them speaking to the press, according to the victim’s cousin. Amid outcry, the superintendent of police in Hathras was suspended for “negligence and lax supervision” by the Uttar Pradesh government, along with four others.

Despite the suspensions, a lawyer for the victim’s family said the intimidation has continued as national attention on the case has grown. “The family is receiving open threats, their phones are being tapped by the police,” the lawyer said, according to an Oct. 9 Indian Express report. “Is this the way to treat a victim’s family? They feel unsafe, their neighbours are rude to them. They don’t want compensation, they want justice.”

Activists say that, as with institutional racism in U.S. police forces, the Hathras case indicates the problem with India’s police is not caused by a few bad apples but because of a systemic problem with caste.

Uttar Pradesh is India’s most populous state with more than 200 million people. Thakurs are a dominant caste there, making up just 8% of the population but owning more than 50% of the land, according to the Print.

The four alleged rapists are Thakurs. Thakurs have a large presence in the police and state government, including the state’s chief minister, Adityanath, a senior figure in India’s ruling Hindu nationalist Bharatiya Janata Party (BJP).

“Thakur supremacy, landowning, and the power Thakurs play in electoral politics are very significant. The police officials, magistrate, are all from the Thakur community. Grave ignorance of law comes from the fact they are all Thakurs and they want to maintain their supremacy. It is something embedded in the culture of Uttar Pradesh,” says Munusamy. “Most Dalits in rural areas work on the agricultural lands of upper caste groups. So if they lodge a complaint they have to risk their very livelihoods and safety.”

Activists say that the power dynamics of Uttar Pradesh are key to understanding the context of the state response to the Hathras case. “The fact that the perpetrators of this brutal and horrendous act belong to the same caste as Adityanath’s, gives a clue as to why his government failed to protect the girl,” said Ahsan Khan, president of the Indian American Muslim Council, in an Oct. 4 statement.

What does the Hathras case mean for Dalit rights?

The Hathras case is one of the most prominent examples of the rape of a Dalit woman receiving sustained national attention in India. “For us, this is very important because it is a milestone in the Dalit women’s movement. It has brought us into center stage. And it has created spaces for the issues of Dalit women and girls, which have most of the time been marginalized, not only by the feminist women’s rights movement, but also by by the Dalit movement, which is quite male dominated,” says Manjula Pradeep, a Dalit human rights activist and former executive director of the Navsarjan Trust, one of the largest Dalit rights organizations in India.

But activists say that there is a long way to go before they achieve lasting cultural change. “I think the mind of the people has to change,” Pradeep says. “India is a very caste-based society and it’s also a patriarchal society. People’s minds are very narrow, and they are into this idea of purity and pollution, where they don’t see others as equals. That mindset has to be changed, and that is the biggest challenge for us. Because people don’t want to change, because there’s power.”

Most Popular on TIME
1
Joe Biden’s Pick to Lead the Pentagon Was on Shaky Ground. Then the Insurrectionists Came
2
What to Know Before Watching WandaVision
3
Local GOP Officials Promoted Capitol Protest 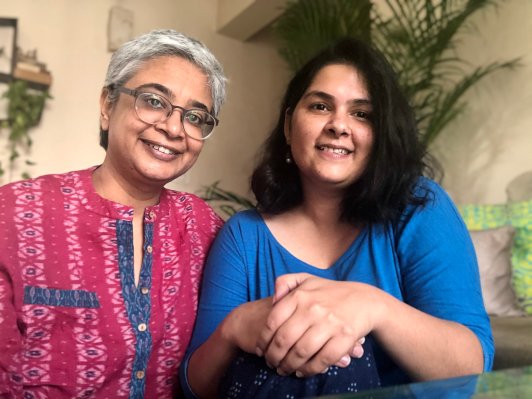 Is India Ready to Legalize Same-Sex Marriage?
Next Up: Editor's Pick