In February 2002, when high school junior LeBron James came into the national consciousness and Sports Illustrated ran a cover story calling him “The Chosen One,” what could any reasonable person imagine? Another young athletic phenom, for one—with the potential to fall short of the hype. It had happened many times in sports before LeBron, and many times since: the can’t-miss sports teen who struck out. In fact, America’s premier athletic hype factory, ESPN, heaped even more expectations on James in his senior year, reserving coveted airtime for his high school games.

Given the history of highly tipped athletes falling short, probably few would bet that he’d become the first player to lead three different teams to NBA titles, as LeBron did Sunday night when his Los Angeles Lakers steamrolled the Miami Heat 106-93 in the championship-clinching Game 6 of the NBA Finals. LeBron scored 28 points, grabbed 14 rebounds and dished out 10 assists. Can it now be argued that this athletic marvel from Akron, Ohio has a fair claim to dethroning Michael Jordan as the Greatest Of All-Time?

“I played against Michael, and in my opinion Michael is the greatest to ever play,” says former NBA player Rex Chapman, and NBA TV analyst. “But LeBron James, my goodness—if you want to argue that he is, you’re welcome to do that. And you won’t sound crazy.”

Here’s what no one could see coming two decades ago: that James would keep piling up eye-popping statistics for 17 straight seasons, and play in 10 NBA Finals, while simultaneously churning out movies and television shows and seeking to build a Hollywood empire. That he’d open up his own academic institution in Akron —the kind of place never afforded to him while growing up in a disadvantaged part of his hometown—and see kids from his I PROMISE school featured on a Wheaties box.

Something else seemed impossible in 2002, when Jordan’s apolitical superstar athlete model was still the standard: that James would not only become the world’s best basketball player, but that he’d also emerge as one of the most prominent activists in sports. That he’d be told to “shut up and dribble” by political pundits taking umbrage over the fact that he shares his opinions. That his statements about police violence would help shape the national discourse. That he’d be verbally sparring with the President of the United States.

Meanwhile, LeBron keeps winning through it all.

Todd Boyd, professor of race and culture at the University of Southern California, argues that James has joined Muhammad Ali and Michael Jordan as the athletes of the past 60 years who’ve best combined all-time athletic performance with a transcendent cultural impact. Ali was an activist; Jordan’s Nike deals and product pitches changed the business of sports; James combines business savvy and social engagement. James’ fourth title, in this year of pandemic suffering and widespread social unrest sparked by a racial reckoning, will go down as his most important.

“You have to imagine how many people there were, who would have been so happy to see LeBron fall flat on his face,” says Boyd. “He didn’t do that. And not only did he not do that, he expanded his sport, and then he was able to make himself this great American who uses all that he’s accomplished on the court as a way of enforcing other aspects of society. People would complain about athletes almost wasting their platform and wasting their resources. LeBron rewrote all that.”

In no way does this Lakers title deserve any kind of asterisk just because the NBA postseason was contested in unusual circumstances (in a bubble, with no travel or fans during playoff series). The NBA played a majority of its season when it shut down back in March—and the Lakers were already elite. In a full slate of playoff games, James fended off all-world players like Jimmy Butler in Miami, and Nikola Jokić in Denver, James Harden and Russell Westrook in Houston and Damian Lillard in Portland. James may have had his best running mate ever, in Anthony Davis, a surefire Hall of Famer. No one at 6’10” should be able to do the graceful things Davis does on the basketball court.

Still, the Lakers run through LeBron James. His Game 6 performance spoke to his greatness: he attacked the rim all night, scoring with ease and demoralizing Miami into oblivion.

“He’s the king,” says Boyd. “We can go back to Shakespeare: ‘Uneasy lies the head that wears a crown.’ It’s not an easy job. It could have easily come off his head. But he’s wearing it, and he’s wearing it proudly, with style and distinction.”

And there’s no reason to think he’ll give it up any time soon. James, at 35, is playing some of the most exciting basketball of his career; he led the NBA in assists, with 10.2 per game, for the first time. The joy he finds in sharing has inspired a generation.

The teen gazing at the Sports Illustrated camera, with a sense of wonder, is a bit more weathered now. The gray in his beard is showing. But his smile on the victory stage on Sunday night showed he still had that youthful verve. It served as a reminder, of how far he’s come since those high school days; further than anyone ever imagined. 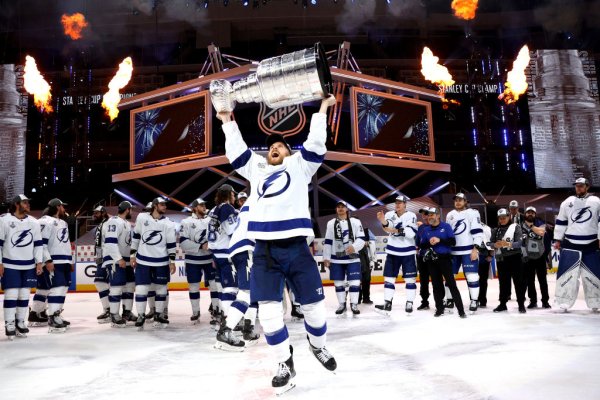 The NHL Had 0 Positive COVID-19 Tests Throughout the Postseason. We Asked Commissioner Gary Bettman What We Can Learn From That
Next Up: Editor's Pick