The World Food Programme Won the 2020 Nobel Peace Prize. Here's How the Pandemic Has Made Its Work Even More Essential

The U.N.’s World Food Program was awarded the 2020 Nobel Peace Prize on Friday, with the Norwegian Nobel Committee praising the agency’s “impressive ability to intensify its efforts” during the COVID-19 pandemic.

The WFP is the world’s largest humanitarian agency focused on hunger. It seeks to tackle both chronic food insecurity—the long-term lack of access to enough food, suffered by 690 million people in the world—and acute insecurity—periods of extreme hunger over a defined period of time. Earlier this year the agency warned that the number of people facing acute food insecurity is likely to double from 135 million to 265 million in 2020, in large part because of the COVID-19 pandemic.

The pandemic has compounded the impact of conflicts, poverty and climate-related shocks that had already been driving up both chronic and acute hunger for the five years preceding 2020, Arif Husain, chief economist at the WFP, tells TIME. “We were already in a bad state,” he says. “But COVID-19 has created a kind of economic quicksand under people’s feet. If we don’t pull them out quickly, it takes people years – if not decades – to recover.”

Here’s what to know about how hunger has worsened in the world in 2020.

How has the pandemic affected global food security?

Overall the world has enough food to feed the global population in 2020. The problem is getting it from where it is produced, to where it is needed. And the pandemic made that much more complicated.

The sudden implementation of lockdowns caused unprecedented ”fractures of supply chains right across the board,” says Jagjit Singh Srai, Co-Chair of the University of Cambridge’s Interdisciplinary Research Centre on Global Food Security. “You had a shock to the system in terms of supply, problems in harvesting food, and a loss of income and ability to purchase.” In developed countries like Australia, travel bans during the pandemic meant migrant workers were unable to participate in harvests, leaving food rotting on the vine. A reliance on imported food in countries like the U.K., coupled with panic buying at the start of the pandemic caused by fear of disruption, left grocery store shelves bare.

But the pandemic’s most severe impact on food security has been felt in developing countries. The loss of jobs, and remittances from their citizens living abroad have made people less able to afford food. The price of food has risen in some places, such as Sudan, due to economic disruption and inflation. From a supply chain point of view, Srai says, the “extreme fragmentation of markets in developing countries,” with trade generally divided among many retailers, has made it harder to combat the disruption.

What areas are most affected?

Countries that have been destabilized by conflict are generally also the worst-hit by hunger, according to the WFP. In Yemen, before the pandemic began, a five-year long civil war had driven more than half the population into a state of food crisis, emergency or catastrophe. Two million Yemeni children under five suffered acute malnourishment in 2019. In South Sudan, where the 2018 end of a civil war did not end a severe economic crisis, six in 10 people are facing a food crisis or emergency.

Other countries facing some of the world’s worst food crises include the Democratic Republic of the Congo, Afghanistan, Venezuela, Ethiopia, Syria, Sudan, Nigeria and Haiti.

What are the worries for food security going forward?

As well as further economic impacts and supply chain disruptions caused by the pandemic, Srai says the world faces “a perfect storm” for food security over the coming months and years, made up of conflict, trade disputes, overutilization of natural resources, and an increase in extreme weather events driven by climate change.

Read more: How Coronavirus Could Set Back the Fight Against Climate Change

Climate change is the greatest long-term threat to global food security, says Mario Herrero, Chief Research Scientist in Agriculture and Food at Australia’s Commonwealth Scientific and Industrial Research Organization. The average annual number of extreme weather events, such as droughts and unusual floods, has more than doubled since the early 1990s, to more than 200. Meanwhile agricultural seasons are becoming destabilized or shortened. “If we think COVID is bad, climate change is really, really a lot worse, especially when we start really getting the impacts in a couple of decades,” Herrero says.

For Husain, the WFP’s chief economist, funding is also a worry. Donors and U.N. member states have been “very generous” so far with contributions to the program, but it is possible, he warns, that the economic crisis deepening in countries around the world could lead the government to cut their humanitarian funding. The Nobel Committee’s statement included a warning that “the world is in danger of experiencing a hunger crisis of inconceivable proportions if the World Food Program and other food assistance organizations do not receive the financial support they have requested.”

Such cuts would be a major mistake and lead to greater problems for both developed and developing countries down the line, Husain says. He cites the economic and political fall out of events like Europe’s 2015 refugee crisis and other forced displacements driven by conflict and insecurity. “We live in a very interconnected world. So, if we don’t address these problems, wherever they happen, later, they come back to bite us.”

With reporting by Aria Chen 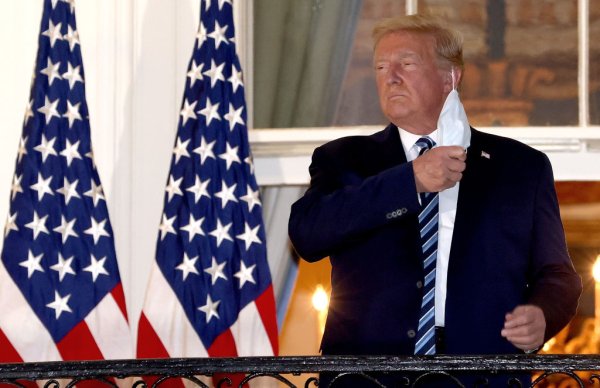 Democrats and Republicans' Divergent Views of COVID
Next Up: Editor's Pick