How Coronavirus Could Set Back the Fight Against Climate Change

This year was supposed to be a big one in the international fight against climate change. But the fast spreading new coronavirus disease, COVID-19, is posing a triple-threat to action that could derail the Paris Agreement effort to combat global warming, worried experts say.

The disease is a challenge for climate change action on multiple fronts. COVID-19 has already disrupted crucial negotiations ahead of a November conference in Glasgow that could determine the Paris Agreement’s success in reducing emissions. The outbreak may supplant climate concerns in the minds of the public, weakening political will at a key moment. And it may encourage burning fossil fuels in hopes of restarting the global economy.

“Everybody’s going to be putting safety first right now,” says Matthew McKinnon, an advisor to a group of countries especially vulnerable to climate change. “And whether or not safety first aligns with climate first is going to vary from place to place.”

Under the Paris Agreement, countries are supposed to announce new pledges to reduce emissions this year ahead of a the Glasgow summit. If they don’t follow through this year, climate policymakers will need to depart from a decades-long cycle of important conferences, or accept that the world will blow past targets to limit temperature rise.

To lay the ground for the Glasgow summit, international climate and environmental policymakers planned to hop between a series of important meetings and conferences that would set the stage and, they hoped, allow the world to finally bend the curve on emissions. But, as international travel has ground to a halt, the important work of climate diplomacy has suffered as in-person meetings have become impossible and a series of important conferences have been canceled, from the World Oceans Summit in Japan to CERAWeek, perhaps the most important energy conference, in Houston. The United Nations’ climate body has called off all meetings through the end of April, citing health and safety of attendees as well as the inability to muster a quorum.

Rescheduling meetings has proven hazardous. The Convention on Biological Diversity, which is trying to broker a landmark deal to protect nature by October, moved a meeting from Kunming, China to Rome, to escape the coronavirus. But as the meeting progressed delegates were slowly recalled as news spread of a coronavirus outbreak in Italy. “We left around the middle of the week,” says Lina Barrera, vice president of international policy at Conservation International. “Some people didn’t come at all.”

The cancellation of meetings may sound dull, but it has the potential to totally derail climate talks at a delicate time. The last major international breakthrough on climate came at the 2015 Paris climate talks after a year of behind the scenes maneuvering from diplomats around the world. China and the U.S. made a joint commitment to work together to reduce emissions, a tone-setting statement from the world’s largest emitters. Countries vulnerable to climate change banded together to form a formidable alliance. And France coordinated the myriad demands from the nearly countries that would gather in Paris. Such a schedule is widely seen as a necessity for big breakthroughs on the issue, and not being able to meet face to face has left climate policymakers in the lurch. “We’ve been unable to come up with previous comparisons or analogs,” says Nathaniel Keohane, a senior vice president at Environmental Defense Fund who served as an environmental policy advisor to President Obama, of the pause in meetings.

Even if countries could keep up the breakneck pace of meetings and summits, the coronavirus and its related fallout threaten to distract countries from making big commitments to reduce their emissions. Bold climate plans require spending political capital, and world leaders are likely to want to use their political energy to boost the economy in response to coronavirus.

Every country will have its own approach, but the most significant country to watch is China, the world’s second-largest economy and largest emitter. Emissions there fell 25% in mid-February compared to just a few weeks earlier as the country’s industrial economy ground to a halt, but leaders have promised a giant stimulus to restore growth. In the past, such stimulus measures in the country have meant carbon-intensive infrastructure.

“The question is, what will happen once the economy starts to rebound?” says David Sandalow, an expert on China’s energy and climate policy who serves as a fellow at Columbia University’s Center on Global Energy Policy. “Economic growth will be an even higher priority in the months and years ahead as the government works to stabilize the economy in the face of the coronavirus.”

Still, spurring economic growth doesn’t necessarily need to increase emissions. The European Commission, the European Union’s executive body, for instance, doubled down on its plans for a $1 trillion Green Deal last week, which is intended to reduce emissions and foster growth. Indeed, many climate advocates have long-advocated for “green” stimulus measures in times of economic uncertainty to serve a dual purpose of expanding and decarbonizing the economy. Such measures of economic stimulus are certainly possible in China and elsewhere — but they are certainly not guaranteed.

Climate advocates are only just coming to grips with the roadblocks to a big climate breakthrough. The growing public pressure that brought millions to the street last year combined with a new understanding of the risks of climate change in the financial community seemed to coalesce perfectly with the statutory requirements for new commitments rooted in the Paris Agreement. The landmark climate deal calls for countries to keep temperatures from rising more than 2°C by 2100 and ideally by less than 1.5°C.

The window to achieve that is closing with temperatures having already risen more than 1°C. Coronavirus — and all the related fallout — may close that window a little more, the latest setback in a series of challenges that have for decades held back efforts to tackle climate change. “In many countries, the political conditions are not conducive to a strengthening of climate action,” says a former senior climate negotiator. “Coronavirus will make a bad situation worse.” 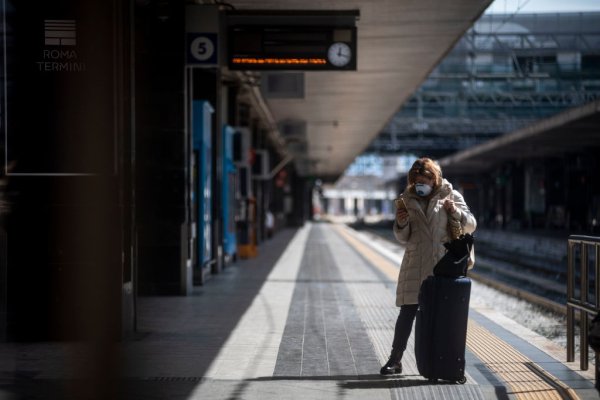 Why Is Italy's Coronavirus Outbreak So Bad?
Next Up: Editor's Pick