COVID-19 Outbreaks Are Now Emerging in Refugee Camps. Why Did it Take so Long For the Virus to Reach Them?

A migrant from Afghanistan carries some of his belongings through the destroyed Moria camp on Lesbos, Greece, on Sept. 12, 2020. The camp, already a bleak emblem of Europe's migrant policy, was locked down after a coronavirus outbreak, prompting some asylum seekers to set fires that left thousands homeless.
Mauricio Lima—The New York Times/Redux
By Mélissa Godin

For a number of months, the world’s largest refugee camps appeared to have been spared the worst of the coronavirus pandemic. But human rights groups now say COVID-19 infection rates are on the rise in the temporary settlements that house millions of the world’s most vulnerable people, with alarming consequences both for those vulnerable groups as well as the world more broadly.

The United Nations High Commissioner for Refugees reports that globally, 21,000 of the world’s 30 million refugees have tested positive for the virus across 97 countries. At the end of Sept., 32 new cases were reported in the refugee camps in Cox’s Bazar, Bangladesh, home to 745,000 Rohingya, an ethnic minority fleeing violence and discrimination in Myanmar. In Greece, more than 240 refugees have tested positive for the virus on the island of Lesbos. And in Lebanon, Syria, and Palestine, COVID-19 outbreaks have occurred at several camps over the past month. Though UNHCR reports the numbers rose sharply in September, the true number of cases remains unknown because of limited testing.

Aid agencies had long expressed fears about the potentially devastating impacts of the virus for those living in crowded camps where medical services are sparse. Yet for the first six months of the pandemic, case rates remained far lower than expected. While low testing rates in refugee camps could explain why so few cases have been reported, experts say that many camps’ isolation from host communities as well as the imposition of strict lockdown measures curbed the spread of the virus.

Even if refugees have so far been spared the worst of the pandemic’s immediate health impact, the outbreak has taken a huge toll on refugees’ lives. The global economic recession has led to major cuts to humanitarian funding for refugee camps—causing food shortages—and limited employment opportunities for displaced people, with the Norwegian Refugee Council estimating three quarters of displaced people have lost income since the pandemic began. Lockdowns have also further restricted refugees’ mobility, with countries like Greece placing tighter restrictions on refugees than the rest of the population. Moreover, many experts say governments are using the pandemic as an excuse to violate refugees’ rights. “Governments are using COVID-19 as a pretext to block people from the right to seek asylum,” says Bill Frelick, the director of Human Right Watch’s refugee and migrant rights division. “It runs roughshod over the basic principles of refugee protection.”

Now, as the virus begins circulating in camps around the world, experts worry that refugees—who have already suffered so much from the pandemic—may not get the medical support they need. “If the disease gets introduced into [more refugee] camps, it would be a tinderbox,” says Frelick, noting that the virus would spread rapidly. The low case rates we have seen so far, Frelick says, are “just a lucky break.”

Why have COVID-19 rates been lower than expected in refugee camps?

COVID-19 rates in refugee camps are unexpectedly low in part because the camps tend to be isolated from surrounding communities, limiting the odds of the virus spreading into the camps. “Camps are situated often in the most desolate, unwanted land that a country can find,” Frelick says. “No one casually goes in and out.”

National lockdowns also helped protect refugees from the virus. In Jordan, for instance, which hosts 747,000 refugees—mostly from Syria—the government implemented one of the world’s strictest lockdowns, shutting down airports for several months and jailing people who broke quarantine. “There was a tight lockdown that was put in place towards the third week of March including the shutting down of all the borders and airspace,” says Juliette Toumas, UNICEF’s chief of communications for the Middle East and North Africa, about Jordan. “This helped.”

Additional restrictions placed specifically on refugee camps also helped limit viral spread. Many camps have reduced the number of people entering and exiting, for instance. In Bangladesh’s Cox’s Bazar, only 20% of the usual number of humanitarian workers were allowed to enter during the first few months of lockdown and deliveries were made less frequently in order to reduce potential transmission, according to Saad Hammadi, a South Asia Campaigner for Amnesty International. “Many of the operations—except for the essential ones—were carried out remotely,” Hammadi says. “These are the measures that might have reduced or delayed the spread of the virus.”

There are other factors, however, that could explain low case numbers. Half of refugees worldwide are under the age of 18, according to the UNHCR, and their relative young age may make them less susceptible to having a severe infection with the virus. If young people are asymptomatic or have mild symptoms, they may also be less likely to get tested.

It is also possible that there have been cases of COVID-19 that have gone undetected in camps. While some testing is available, it is hindered by a shortage of testing supplies and medical personnel to carry out the tests. Some refugees also do not want to get tested for fear that they may have to self-isolate and therefore be unable to carry out any income-generating activities they rely on for survival. In Cox’s Bazar—the world’s largest refugee settlement in Bangladesh—less than 1% of the population has been tested. The lowercase numbers could therefore be a result of low testing rates: the actual number of cases could be higher.

But experts say that despite low testing rates, COVID-19 infection rates in camps still have not been as bad as expected. “Even if you carried out a large number of tests, it’s still likely to be a low number [of infections,]” says Hammadi. If COVID-19 was spreading through camps undetected, camps would witness rising numbers of people requesting medical attention or rising numbers of death, neither of which have been the case in several camps, according to UNHCR data. “I do think there is a hidden outbreak to an extent but we’re not seeing other indicators showing a massive outbreak,” says Tue Jakobsen, CARE’s country director in Syria. “We’re not seeing a host of people falling ill or dying.”

Why are we seeing outbreaks now?

As lockdowns were lifted and economies and borders reopened over the summer, experts say it was inevitable that the virus would find its way into several camps.

Many settlements have also softened their entry and exit requirements, allowing refugees to leave the camp for work purposes, increasing the chances of refugees catching the virus. Ammar Zayyad, CARE’s country director in Jordan, says that within weeks of loosening restrictions, they began seeing their first COVID-19 cases in several camps across Jordan. “So far, we’ve kept the virus in check,” he says. “But we need to test, track and trace in order to reduce the risk of further spread.”

What can be done to protect refugees from COVID-19?

Basic public health measures must be implemented. Most critically, camps require better testing and tracing, in addition to face masks, hand sanitizer and other supplies. “The testing capacity needs to increase irrespective of confirmed cases,” says Hammadi, who added that catching cases early on was important in order to avoid larger outbreaks.

Both of these measures, however, require international support for refugees, which is currently on the decline. The pandemic and subsequent economic crisis has led to cuts in foreign aid as many countries look inwards, directing their resources domestically rather than internationally. The United Kingdom, for instance, announced in July it would cut its global aid budget by $3.7 billion dollars due to the pandemic.

International support for aid organizations working with refugees is also on the decline, with aid organizations reporting significant cuts to their budgets. A spokesperson from UNICEF’s Middle East and North Africa division told TIME it has only received 40% of the funding it needs. The United Nations World Food Programme (WFP) also said it faces budget cuts and has been forced to reduce its food rations to refugees in Eastern Africa by 30%.

Experts say that if aid organizations continue to be unable to provide adequate amounts of food along with other basic needs, refugees may leave the camps in search of a better life elsewhere. “It’s creating a disincentive for refugees to stay where they are,” says Michael Dunford, the regional director in eastern Africa for the WFP. “[Food shortages] could result in them leaving the camp and crossing international borders which potentially, leads to further spread.” 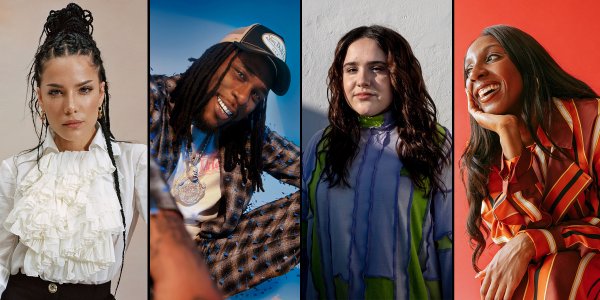 How TIME Chose Its 2020 Next Generation Leaders
Next Up: Editor's Pick