Donald Trump, M.D.: How the President Is Shaping His Own Treatment

President Donald Trump didn’t want to go to the hospital in the first place. Trump was admitted only after Chief of Staff Mark Meadows insisted he leave the White House when he spiked a fever Friday morning, was coughing and his blood oxygen level threatened to dip dangerously low, say two current White House officials. All along, Trump’s been a challenging patient, insisting on shaping the course of his care as well as stage managing how his health is projected to the public.

After being shuttled to Walter Reed National Military Medical Center by helicopter on Friday evening, Trump pressed to be sent home all weekend. He pushed his doctors to find a way to administer back at the White House the aggressive therapies he’s been receiving. On Monday, he announced his hospital discharge on Twitter hours before it happened, a tactic he’s often used to ram through a decision his staff were slow-walking. It didn’t take long for Trump to spin his return to the White House into a campaign tagline. “Don’t be afraid of Covid. Don’t let it dominate your life,” Trump wrote on Twitter. He later tweeted about the day’s 1.68% stock market gain, a metric he watches closely, and likes to take credit for.

Medical doctors warn Trump could still be a few days away from what can the most dangerous part of the COVID-19 disease cycle, called the cytokine storm, when the body’s immune response rages and can overwhelm its own function. “He’s a high risk individual and he is now entering a potentially unstable part of his clinical course,” says Dr. Howard Koh, a Harvard professor on health policy who was a senior health official in the Obama Administration. “The last thing we want for his health is to be discharged too early and be readmitted.”

During his hospital stay, while peppering doctors with his own ideas for his treatment, Trump has also insisted on projecting an image of working, putting out photos and videos that show him upright and not infirm, despite the severity of his condition that the unusually aggressive cocktail of drugs he is taking would suggest.

On Saturday evening, for example, after he started a steroid treatment used for patients with severe bouts of COVID-19, Trump sat for two photographs taken ten minutes apart of him with what appear to be the same folders and documents on two different tables in two different rooms. Then on Sunday, Trump put his own health and the health of two accompanying Secret Service officers in jeopardy by staging a ride past supporters in his limousine, a move that was “really ill advised,” Koh says.

As Trump moves back into his residence, Trump’s doctors will continue the full-court-press-style therapeutic treatment that, for any other patient who is not the President of the United States, would not be given anywhere but in a hospital. He has one more intravenous drip of the antiviral drug Remdesivir that has been shown to help slow the spread of COVID-19 in the body, and likely many more days of the steroid dexamethasone, which is often administered for 10 days under close hospital supervision and is intended to reduce the chances of the voracious immune response that can kill COVID-19 patients during the second week of the disease.

All along, Trump has told his doctors what they should — and shouldn’t — say publicly about his condition. In that way, the confusing and contradictory information about Trump’s medical condition has mirrored the President’s handling of the epidemic. As with everything in Trump’s world, he sees his medical decisions through a political and public relations lens and wanted to project as early as possible that he was strong and unafraid of the virus that has killed more than 200,000 Americans and counting.

Before Monday’s press conference, Trump went over point by point with his medical team what details of his condition they were going to discuss. Trump did not want to disclose the results of his lung scans, which in patients with severe COVID-19 can show clouding from where the body’s immune response has injured the lungs. Trump’s doctor, White House physician and Navy Commander Sean Conley, said Monday that the Health Insurance Portability and Accountability Act of 1996 (HIPAA) prevents him from releasing information his patient doesn’t want out. “There are HIPAA rules and regulations that restrict me in sharing certain things for his safety and his own health and reasons,” said Conley, when asked about Trump’s lung scans.

Conley has described how Trump has been pushing his doctors on their treatment recommendations. They had exchanges over whether he should be given hydroxychloroquine again, which has not been proven to be effective, and if he should rest face down in the prone position, which has helped some COVID-19 patients breathe better on their own. “He’s been holding court with those of us around him, the whole team, going over all the specifics, the testing, what the future is. And we’ve been back and forth on what’s safe and what’s reasonable,” Conley said on Monday, adding that President Trump “has been a phenomenal patient.”

On Sunday, Conley admitted to being intentionally vague about details regarding Trump’s condition over the weekend. It was a tacit acknowledgement that his public statements were not geared for the benefit of the American public alone, but for how what he said publicly would impact his patient’s physical response to the disease. “I didn’t want to give any information that might steer the course of illness in another direction,” Conley said. “And in doing so, you know, it came off that we’re trying to hide something, which wasn’t necessarily true.” In other words, Conley believed that revealing too much information about Trump’s condition, with Trump watching, could make Trump sicker.

It was a startling admission from a medical expert about the psychology of his patient, a President who has long adhered to the idea that thinking positively can make those thoughts a reality. Conley’s explanation drew fire from critics who say the medical team is obscuring the truth about the President’s condition. Conley keeps repeating that Trump is doing well, but at the same time, he’s authorized experimental treatment that comes with inherent uncertainty and risk that would typically only be carried out if the patient was in the most severe circumstances.

Army Col. Sean Dooley, a pulmonary critical care doctor, has also given ambiguous answers about Trump’s condition. When asked if the President’s X-rays and CT scans showed signs of pneumonia, an infection in the lung causing inflammation in the small air sacs in the lungs that transfer oxygen into the bloodstream, Dooley dodged. “There’s some expected findings, but nothing of any major clinical concern,” he said on Sunday, indicating Trump’s lungs could be injured from the virus. A reporter then asked if Trump’s oxygen levels ever dropped below 90% — anything below 94% indicates an oxygen issue — and Dooley again he evaded a direct answer. “No, it was below 94%,” he said. “It wasn’t down into the low 80s or anything.”

Both Conley and Dooley are in an awkward position of treating Trump, who as President, is also their commander in chief. When he relays a preference or inclination, it could be seen as a direct order. The White House has not yet said whether Trump’s drive-by for supporters on Sunday was explicitly against medical advice.

Dr. James Phillips, a non-military attending physician at Walter Reed and assistant professor at George Washington University Hospital in Washington, sharply criticized on Twitter the spectacle of Trump riding in an enclosed car with others while sick.

“The risk of COVID-19 transmission inside is as high as it gets outside of medical procedures. The irresponsibility is astounding. My thoughts are with the Secret Service forced to play,” he tweeted, adding: “Every single person in the vehicle during that completely unnecessary Presidential ‘drive-by’ just now has to be quarantined for 14 days. They might get sick. They may die. For political theater. Commanded by Trump to put their lives at risk for theater. This is insanity.”

In the meantime, Trump and his team are pushing to cast his return to the White House as a medical recovery, even though the public doesn’t have enough information to know whether or not that’s true. Given the White House’s pattern of hiding facts and putting out misinformation, many Americans would have trouble believing it anyway.

Trump has already described his hospitalization as a way for him to get to know the disease better than he had before, when he had seven months of briefings from top medical experts and was running a country grappling with death on a scale not seen for a century. “This is the real school. This isn’t a let’s-read-the-book school. And I get it. I understand it,” Trump said in a message on Sunday evening, before stepping into his hermetically sealed, bullet proof car. On Monday, supporters shared memes of Trump knocking out viruses. Trump’s friend and sometime advisor Rudy Giuliani said Trump wanted to pass on a message that he had to “confront” the virus “so that the American people stopped being afraid of it so we can deal with it responsibly.”

Medical experts say that one way to protect yourself from the fear of contracting the virus is to wear a mask and not congregate in large groups. But that message is not one the President has been willing to consistently deliver.

—With reporting by W.J. Hennigan 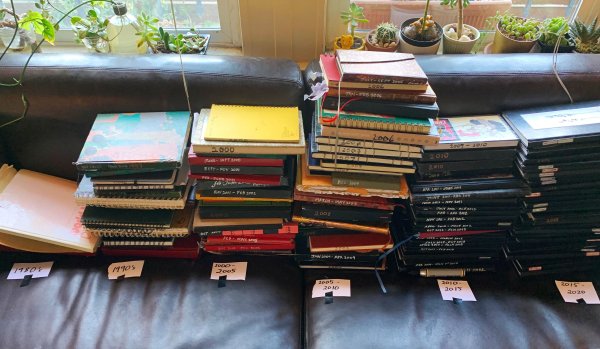 Reconnecting With People During the Pandemic
Next Up: Editor's Pick