President Trump Called Hydroxychloroquine a 'Game Changer,' But Experts Warn Against Self-Medicating With the Drug. Here’s What You Need to Know

For the past few weeks President Trump has continually expressed great confidence in the promise of a new COVID-19 therapy involving two drugs—azithromycin and hydroxychloroquine—ignoring experts’ ongoing insistence that there is not enough evidence to be recommending the treatment.

“What do you have to lose? Take it,” Trump said in a White House briefing on April 4. “I really think they should take it. But it’s their choice. And it’s their doctor’s choice or the doctors in the hospital. But hydroxychloroquine. Try it, if you’d like.”

At a press briefing the following day, a reporter asked Dr. Anthony Fauci, director of the National Institute of Allergy and Infectious Diseases and member of the White House Coronavirus Task Force, to weigh in on the issue. Trump stopped Fauci from answering. “You know how many times he’s answered that question? Maybe 15 times,” Trump said.

Since Trump first started promoting the drug combo, supplies have been disappearing from pharmacy shelves. The U.S. Food and Drug Administration allowed an Indian company previously restricted from importing drug products into the US to now start manufacturing one of the drugs. And U.S. plants began gearing up to produce enough to meet the surge in demand.

But in the meanwhile, a few people who began self medicating with the drugs in an effort to prevent COVID-19 have died, and others have been hospitalized. These tragedies make clear that because the drug combo isn’t yet approved for treating COVID-19, doctors don’t have all the information they need to prescribe it safely and in the right doses yet. They’re setting up studies to investigate those questions, but until those results are available, they are only using the drugs in carefully defined situations as last resort therapies, when the possible benefits to the patients outweigh the safety risks.

Why Trump Brought Up Hydroxychloroquine

Azithromycin is an antibiotic, usually prescribed for a range of bacterial infections, including bacterial pneumonia. Hydroxychloroquine is a slightly different version of chloroquine, a drug discovered to fight malaria during a massive war-time drug discovery effort in the 1940s. Since then, resistance to chloroquine has made it unusable in many parts of the world, so scientists developed hydroxychloroquine as its next generation replacement, and designed it with slightly fewer side effects. Today, it is used to treat malaria, but in the US, it’s mainly prescribed to treat the inflammation related to autoimmune disorders like rheumatoid arthritis and lupus.

The excitement over the combination’s potential began with a small French study of people with the novel coronavirus. In those patients, the load of SARS-CoV-2, the virus responsible for COVID-19, in their blood dropped after they received the medications, although their clinical symptoms didn’t change much. In another study of about 100 patients in China, doctors also reported some success in using the drug duo to reduce the viral load in patients.

Beyond that, however, there isn’t much evidence about how either hydroxychloroquine or azithromycin works against a coronavirus like SARS-CoV-2. The studies from China and France were not randomized clinical trials—the gold standard in medical research, in which people with similar characteristics are randomly assigned to receive the drug or a placebo. Instead, the data came from case reports, which means the researchers weren’t able to completely account for factors like previous health history that could confound and skew their response.

Fauci has said that the data so far “was not done in a controlled clinical trial. So you really can’t make any definitive statement about it.” Only such studies will confirm that the drugs are both safe and indeed effective in treating the viral infection, he said, and can provide critical information on when to use them, and at what dose.

“In general if hydroxychloroquine really, really worked, and it was a magic drug for COVID-19, we would know it by now,” says Dr. David Sullivan, professor of microbiology at the Johns Hopkins Bloomberg School of Public Health and an infectious disease physician at the university’s malaria research institute. “Right now we have no clinical evidence that it works.”

Still—perhaps unsurprisingly, given the confusion and desperation people are feeling in the current health crisis—that hasn’t stopped some from acting on the anecdotal reports (and, presumably, Trump’s very public endorsement) and treating themselves with either inappropriately obtained prescriptions or, in the case of hydroxychloroquine, versions of the drug that are available for sale as cleaning agents for fish tanks, for example. Public anxiety also contributed to a run on the drugs in pharmacies, and pharmacists turned to social media to beg patients not to stock up on the medications, and doctors not to inappropriately prescribe them because people with rheumatoid arthritis and lupus need them.

Why Hospitalized Patients Are Getting Hydroxychloroquine

While health officials are not condoning that people with mild symptoms start self-medicating with hydroxychloroquine, doctors are starting to use it on their sickest patients in the hospital.

At Johns Hopkins, for example, six of the hospital’s two dozen or so COVID-19 patients are receiving the drug. Doctors at both the UCLA Medical Center and Boston’s Brigham and Women’s Hospital are now starting to treat patients with severe COVID-19 symptoms with hydroxychloroquine when other treatments don’t work. “We consider the use of hydroxychloroquine on a case-by-case basis for hospitalized patients who are at risk of disease progression,” says Dr. Daniel Kuritzkes, chief of the division of infectious diseases at Brigham and Women’s Hospital and professor at Harvard Medical School.

It’s not ideal, but as physicians get desperate watching patients decline with respiratory failure, such off label use of hydroxychloroquine in particular may become more common. Off label use means drugs, like hydroxychloroquine, that are already approved for one use can be prescribed for another use, as long as the doctor is comfortable with the unknown risks and side effects. “If someone is sick in the ICU you try everything possible you can for that person,” says Dr. David Boulware, a University of Minnesota professor of medicine. Especially as hospitals start getting concerned about dwindling supplies of equipment such as ventilators, anything that can prevent patients declining from mild to severe disease is worth a try.

“We are reserving it for those who might get the most benefit from the treatment because they may be at the highest risk of severe COVID-19 disease when they enter the hospital,” says Sullivan. If the drug can prevent severe disease, then that may spare the hospital and the health care system from the most expensive and invasive types of care such as days spent in the ICU with expensive mechanical breathing support. That, in turn, could help stymie the COVID-10 pandemic.

How Hydroxychloroquine Works Against COVID-19

While there isn’t a deep well of scientific data on how to use hydroxychloroquine to treat viral infections, doctors aren’t flying completely blind. There have been lab studies of hydroxychloroquine suggesting that in people, cells in the respiratory tract, for example, engulf coronaviruses within a tiny pouch. The virus needs to puncture this pouch in order to release its genetic material into the cell and turn it into a viral copying machine to pump out more virus. To do all that, SARS-CoV-2 requires an acidic environment. Hydroxychloroquine is an alkaline compound, so it raises the pH levels of the host environment, preventing the virus from releasing its genes for copying. The end result: the coronavirus is bumped out of cells and can’t infect them. (How azithromycin contributes to this process isn’t clear yet, but doctors suspect that it may quell the worst respiratory symptoms of COVID-19 by reducing inflammation caused by the viral infection in the lungs.)

In lab studies done over the last few years, when researchers infected human cells with different viruses and then bathed them in hydroxychloroquine, they could generally stop viruses like influenza, SARS-CoV-2, and the original SARS virus (another type of coronavirus) from infecting the cells.

“The problem is that what happens in the lab often doesn’t predict what happens in a patient,” says Dr. Otto Yang, from the department of microbiology, immunology and molecular genetics at the David Geffen School of Medicine at the University of California, Los Angeles. In fact, hydroxychloroquine turned out not to be as successful in stopping infection in animals and people.

More rigorous studies will hopefully shed additional light on if, and when, hydroxychloroquine could treat COVID-19, as well as provide important information about what side effects it may cause. Boulware, for example, is leading a study to test first, whether hydroxychloroquine can be used to prevent healthy people from getting infected if they are exposed, and second, whether it can treat people who are already infected, but early in their disease, from getting worse and needing to be hospitalized. The study is currently enrolling 1,500 people in each part, and each person who qualifies will be randomly assigned to receive hydroxychloroquine or placebo, and they won’t know which. The team is moving fast: after a volunteer is approved, they are sent a five-day supply of the drug or placebo overnight, and Boulware expects to see results in as early as four weeks.

Those results will be critical for lessening the impact of the pandemic. Protecting people who are at a high risk of infection—such as health care workers or people who live in a household with infected family members—would be critical to stopping community spread of the virus, and could be a type of substitute for a vaccine, since that would take at least a year to develop and test. If the drug could provide some barrier to spreading the virus, then that could flatten the peak of cases and speed the waning of the pandemic. In addition, it could be used to keep people who are infected from progressing on to serious disease. That in turn, would lift the burden on the health care system, since those with mild to moderate symptoms can be treated at home, without the need for intensive ventilator care or hospitalization.

Boulware’s study will also track any potential side effects of the treatment. What concerns doctors most is hydroxychloroquine’s tendency to disrupt electrical signaling in the heart, which can lead to arrhythmias that could be fatal in people with pre-existing heart conditions. And those are the very people who are at highest risk of COVID-19 infection, and who may need something like hydroxychloroquine to slow their disease. That’s why many hospitals are not using the combination of hydroxychloroquine and azithromycin, because each raises the risk of arrhythmia, and together, the risk could be too high.

However, until studies provide more definitive data, doctors are urging people not to find ways to self-medicate for COVID-19, especially since people with rheumatic diseases and lupus desperately need hydroxychloroquine to treat their symptoms. “Don’t add to the frenzy that may deny them the treatment they need,” says Yang. “We need to stop and act rationally based on facts rather than unsubstantiated hunches, even hunches that have some scientific rationale.” 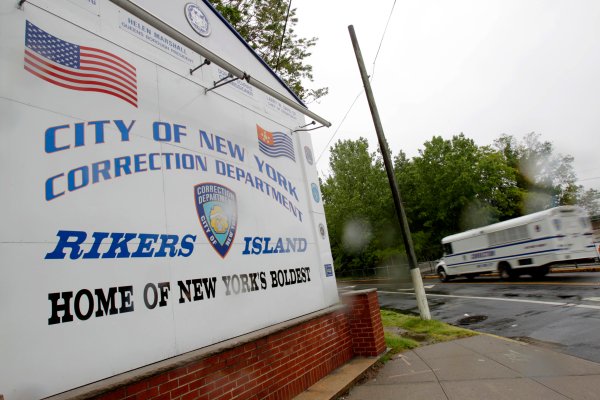 'We Feel Like All of Us Are Gonna Get Corona.' Anticipating COVID-19 Outbreaks, Rikers Island Offers Warning For U.S. Jails, Prisons
Next Up: Editor's Pick