It’s been only about four days since the world learned U.S. President Donald Trump tested positive for COVID-19—but that doesn’t necessarily mean it’s been four days since he was infected.

White House officials and Trump’s personal physician Sean Conley have repeatedly dodged questions about when the President last tested negative for COVID-19. “I don’t want to go backwards,” Conley said when asked about Trump’s last negative test during a Monday press briefing, at which he announced Trump would be discharged from Walter Reed National Military Medical Center to return to the White House.

But the question isn’t only important retroactively. “It matters for a couple of reasons,” says Dr. Megan Ranney, a professor of emergency medicine at Brown University. “The first is because it helps to predict the course of illness. The second reason it matters immensely is because of contact tracing.”

That is, without knowing when Trump last tested negative, it’s impossible to say how many people came into contact with him when he was contagious and may now be unknowingly spreading the virus. Knowing the date of Trump’s last negative test is not going backward; it is crucial to preventing future spread.

The timeline of Trump’s illness has been unclear. He tweeted early Friday morning that he tested positive for COVID-19, shortly after his adviser Hope Hicks tested did. (Wall Street Journal reporting suggests the White House did not disclose a positive test result Trump received on Thursday while waiting for a second test to confirm the results.) On Friday, he received supplemental oxygen and was admitted to Walter Reed before being discharged Monday.

But at a briefing on Saturday, Conley said Trump was 72 hours into his diagnosis—suggesting he was diagnosed with COVID-19 on Wednesday, not Thursday. He later claimed he misspoke and said the President tested positive on Thursday.

It typically takes around a week for symptoms to progress to a point where a patient needs oxygen support. If Trump has been tested every day, as is White House protocol, Wen says it’s strange he would go from a negative test on Wednesday to hospitalization on Friday.

“How is it possible that on Wednesday he didn’t have enough of a viral load to pick it up…and by Friday he has low oxygen and needed to be hospitalized?” Wen says. “If that’s the case, there is something worrisome about President Trump’s health.” (Ranney agrees this progression would be unusual, but says “it is not impossible.”)

It’s important to know how far along Trump is in his illness for multiple reasons. First, many patients get worse around day seven to 10. If Trump isn’t there yet, he’s still not out of the woods. The fact that two drugs the President is taking—the antiviral remdesivir and the steroid dexamethasone—are typically reserved for hospitalized patients with advanced COVID-19 only adds to Wen’s concerns, she says.

Second, the U.S. Centers for Disease Control and Prevention recommends patients isolate for 10 days after their symptoms appear to avoid spreading the virus to other people. If Trump only began experiencing symptoms on Thursday, he still may be contagious and should remain isolated back at the White House, as he reportedly plans to do.

Finally, knowing when Trump last tested negative could offer clues about who came into contact with the President when he was potentially contagious, knowingly or not. Studies have shown that people can spread the virus days before they show symptoms, and Trump attended numerous events—including the first presidential debate—during the window when he was possibly contagious.

“It’s possible there are people who were exposed to the President who don’t know it and are actively passing it on to others,” Wen says. Knowing when Trump last tested negative is crucial to running an effective contact tracing effort—an effort that the White House apparently has not yet begun.

For every day of inadequate information, it gets harder to contact trace effectively, says Joseph Eisenberg, chair of the epidemiology department at the University of Michigan’s School of Public Health. Under the best of circumstances, contact tracing is a time- and labor-intensive process. And with each day that passes, more people potentially get exposed to the virus.

“It is concerning from a public-health perspective that that information isn’t out there, from a transparency perspective, from a trust perspective and for the public to know,” Eisenberg says.

Ranney adds that by not disclosing information that could help direct contact tracing, Trump is essentially flouting the public-health guidelines developed by his own administration. The CDC recommends that anyone who has come into contact with a sick person quarantine at home for two weeks, which people can’t do if they don’t know they’ve been exposed.

“If we are to have any hope of controlling the virus in our country, reopening the economy, and getting our kids back to school, it is so essential [that we follow public health procedures],” Ranney says. “When our own President doesn’t follow them, it makes it that much more difficult.” 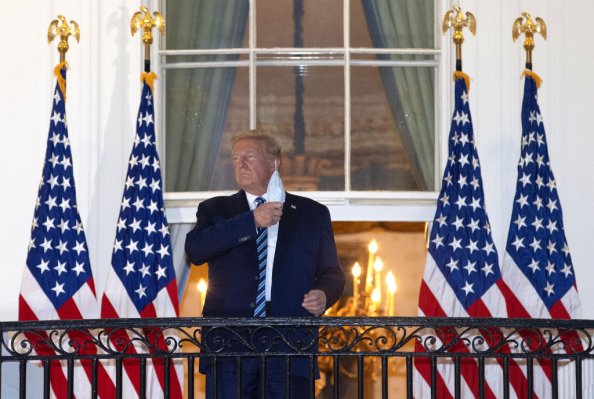 How the President Shapes His Treatment
Next Up: Editor's Pick