In the days immediately preceding President Donald Trump’s COVID-19 diagnosis, he and his aides travelled to five states, holding several rallies and crowded indoor events with large groups of people. But there’s no clear indication that the White House is playing its stated role as the coordinator of a critical contact tracing effort that could help stem the spread of the virus, according to local and state health officials.

But in response to questions from TIME, local and state health officials in many of the locations that Trump recently visited indicated the Trump Administration has taken few evident steps on contact tracing to date. Officials in three states—Minnesota, Pennsylvania and Virginia—stated or suggested they had not been contacted by the Trump campaign. Officials with the city of Cleveland, where the presidential debate was held Sept. 29, did not respond to an inquiry, and the Cleveland Clinic declined to comment on that topic. And officials in New Jersey, who over the weekend said they had started their own contact tracing effort, said late Sunday they received a list of attendees from Trump’s events there but needed more federal cooperation.

“A full contact tracing consistent with CDC guidelines was completed for the Minnesota trip. The President did not have any interactions that would be considered close based on CDC guidelines, which is more than 15 minutes within six feet. During the fundraiser and rally, the President was more than six feet away from all participants,” White House spokesperson Brian Morgenstern said on Saturday. “All White House staff considered to be in close contact during this trip have been identified, contacted and recommended to quarantine.”

Morgenstern added that this applied to Trump’s travel to Virginia and New Jersey this week as well, but referred questions about the presidential debate in Cleveland to the Trump campaign. He also said that the White House did not do contact tracing for Trump’s event in Pennsylvania last weekend because it considered the event outside the scope of time necessary to do tracing.

Trump first announced he tested positive for COVID-19 early on the morning of Oct. 2, saying he and First Lady Melania Trump would begin self-quarantining immediately. At this point, however, the coronavirus had been circling among the President’s staff for an undetermined length of time.

Senior advisor Hope Hicks began exhibiting symptoms on Sept. 30 when she flew with the President on Air Force One to a rally in Minnesota, according to Bloomberg. By Oct. 1, Hicks had tested positive, and soon the list of cases in Trump’s orbit began to mount. Bill Stepien, the Trump campaign manager; Ronna McDaniel, the Chairwoman of the Republican National Committee; former New Jersey Governor Chris Christie and former White House adviser Kellyanne Conway, who recently spent time with Trump preparing for the first presidential debate; and multiple Senators who had recently attended events with Trump all tested positive in a matter of days.

It remains unclear where the cluster of cases among White House staffers and Senators originated, but scientists know that people infected with COVID-19 can be contagious 48 to 72 hours before they start exhibiting symptoms, and many of the now-infected officials were present at an event held by the President in the last week. This has left some local officials and event attendees wondering who may have been exposed to the deadly virus.

Doug Schultz, public information officer for Minnesota’s Department of Health, says the state has not been contacted by the White House or Trump campaign about contact tracing, nor has the state been provided a list of people who may have potentially been infected. Trump visited two cities in Minnesota on Sept. 30, for a fundraiser and a rally.

“We have not at this time received any list from anyone,” Schultz told TIME. “Those things do take time, so it could take a few days before that were to happen.”

It also doesn’t appear that there has been outreach from the White House to Minnesota officials on a local level. Kate Van Daele, public information officer for the city of Duluth, where Trump held a rally, said neither the campaign nor the White House had contacted the city directly. “We couldn’t even get an answer on how many people they let into the event,” Van Daele said.

Trump also held a fundraiser at a private residence in Shorewood, Minn. An email to Marty Davis, the GOP donor linked to the home where the fundraiser took place, went unanswered. (One attendee told the Star Tribune that about 40 people attended and were asked to wait in their car as they awaited the results of a COVID-19 test.) But a health official for Hennepin County, where Shorewood is located, said the county had not heard from the Trump campaign or the White House about contact tracing.

“I have not heard of anything like that – as of yesterday,” Carolyn Marinan, PIO for Hennepin County, said in an email. “I am certain someone from our Public Health area would have reached out to me with any significant updates.” A statement from the county noted that because it had not been provided a list of the attendees at the fundraiser, local officials were unclear on how many county residents were present.

The other large campaign rally Trump attended in the last week took place on Sept. 26 in Middletown, Penn., where local officials also said they have not heard from the federal government about contact tracing efforts. Ian Reddinger, Middletown Council President, told TIME he had not heard anything from the White House, the Trump Campaign or Rep. Scott Perry, a Republican whose district includes the area and who attended the rally.

Before his trip to Minnesota, the President traveled to Cleveland to debate former Vice President Joe Biden. While he stood eight feet apart from his Democratic rival, the two spent approximately 90 minutes in an indoor setting, speaking loudly without a face covering—the exact kind of setting that public health experts have been warning against. Trump’s family also refused to wear masks while sitting in the audience for the debate, violating the rules set by Cleveland Clinic, the debate’s host and one of the country’s leading research institutions. Eleven people associated with preparations for the debate have since tested positive for COVID-19 in addition to those in Trump’s orbit, though they did not enter the debate hall on Tuesday, according to the Cleveland Clinic.

The Cleveland Clinic said it was reaching out to debate guests to address any concerns they had, and the city said it would continue its normal contact tracing operations working with the Ohio Department of Health and the CDC. But neither the city nor the Cleveland Clinic commented on whether they had received any outreach from the White House or the Trump campaign.

Before announcing his COVID-19 diagnosis, Trump also travelled to Bedminster, N.J., for a roundtable with supporters and a fundraiser at his golf club on Oct. 1. Once the President announced his positive test, New Jersey’s Department of Health and local health officials for Somerset County launched their own contact tracing effort. On Sunday, the state Department of Health said it received the names of 206 people who attended the two events. New Jersey Gov. Phil Murphy added on Monday that the Trump National Golf Club had also provided a list of 19 staff members who were involved in the events, and that state and local health officials had notified attendees and staff of possible exposure and warned them to monitor their health. He said in an interview on CNN that while New Jersey is taking the lead, “we need more out of the federal side of this.”

During a news conference on Monday, Murphy noted that people came from across the country to attend the events, so New Jersey health officials would work with the CDC if more people test positive and require further contact tracing. Right now, New Jersey officials are particularly focused on the golf club’s staff, who are mostly local. “We have particular concern for them, considering the potential for spread within our communities since this is where they live. This is very much a race against the clock,” Murphy said at the news conference.

He also said the President’s events may have violated New Jersey’s current rules under its emergency order and that the state would continue to investigate the matter. “It is clear that the President and his staff acted recklessly in coming to New Jersey in the first place, knowing that they had been exposed to someone with a confirmed positive test,” Murphy said. “To put it bluntly, the actions leading up to and during this event have put lives at risk.”

In Virginia, where Trump went golfing at his club outside Washington, D.C., on Sept. 27, local health officials seemed unclear as to who was taking the lead in contact tracing. The Loudoun County Health Department director said there was a lack of clarity when it came to jurisdiction, and referred TIME to the lead agency conducting the case for information about what places they thought merited investigation as a result of Trump’s diagnosis.

“Contact tracing would be done by the federal authorities in this case not us in regards to the President,” said Larry Hill, public information officer for the Virginia Department of Health. “If they needed our assistance we would provide support but I am not aware of a request.”

Write to Abigail Abrams at abigail.abrams@time.com and Lissandra Villa at lissandra.villa@time.com. 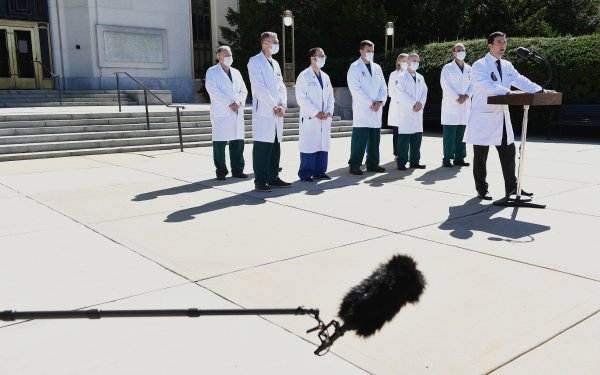 What We Still Don’t Know About Trump’s Medical Condition
Next Up: Editor's Pick