The 4 Biggest Takeaways From BLACKPINK's The Album

It’s no overstatement to call BLACKPINK’s The Album one of the most anticipated releases of 2020. The four-member ensemble’s album surpassed 1 million pre-orders—the first Korean girl group to reach this milestone—and its music video for new title track “Lovesick Girls” topped 100 million views on YouTube just days after its release. These numbers (and the highly straightforward title) make sense given that The Album, released Oct. 2, is the K-pop phenom’s first full-length album since Jisoo, Jennie, Rosé and Lisa debuted in 2016. Over the last four years, BLACKPINK has released singles and mini-albums with up to five tracks. While The Album is compact, with eight songs and half of them coming in under the three-minute mark, it’s significantly more substantial than anything the K-pop act has delivered in the past.

In the months leading up to The Album, BLACKPINK dropped two pre-release singles: the sassy anthem “How You Like That” in June and the flirty pop song “Ice Cream” with Selena Gomez in August. These two tracks set a fresh batch of records—“How You Like That” became the most-viewed YouTube video in 24 hours at the time, and “Ice Cream” debuted at No. 13 on the Billboard Hot 100 in the highest chart position from a K-pop girl group. The latter also marks one of two splashy collaborations on The Album: the other is with Cardi B on the sweetly seductive “Bet You Wanna.”

Here are our main takeaways from The Album, from the return of a title track with a bold vocal chorus to the varied musical and visual styles across the eight tracks.

BLACKPINK’s last two title tracks, “Kill This Love” and “Ddu-Du Ddu-Du,” featured choruses with heavy instrumentals that made room for attention-grabbing choreography to shine but left more to be desired—namely, the members’ voices. While “How You Like That” followed a similar pattern, the subsequent release of “Ice Cream” raised a question partially due to its unconventional structure: Does this song even have a chorus? Where the choruses have been dominated by electronic sounds and beats, the pre-chorus sections in BLACKPINK’s title tracks were often where members flexed their singing abilities.

Fast forward to “Lovesick Girls,” which delivers a chorus with sung melodic lines just as dynamic as those in the pre-chorus—and even catchier tunes in the post-chorus as the members sing, “We were born to be alone.” Meanwhile, “You Never Know,” the stirring ballad on the album, features vocal melodies in the chorus as the artists sing about the hardships of public scrutiny. Another standout, the Cardi B collaboration “Bet You Wanna,” also foregoes the instrumental chorus for one highlighting vocals. In a rare instance of harmonizing across the group’s discography, Rosé’s voice is layered on Jennie’s in a symphonic ending to the track.

To date, the lyrics in BLACKPINK’s tracks are more known for exuding confidence and boldness than they are for offering a window into the personal lives of the four artists. The message in “You Never Know” is a stark departure. “I’ve heard enough, I’ve heard enough of the things that I’m not,” Lisa sings in the track’s opening, as she and Jisoo set the tone for one of BLACKPINK’s most emotionally raw tracks since their debut. “You’ll never know unless you walk in my shoes,” the chorus goes. “Cause everybody sees what they wanna see, it’s easier to judge me than to believe.” As with all of the tracks on the album besides “Lovesick Girls”—whose lyrics Jisoo and Jennie contributed to—BLACKPINK did not write these words. But that doesn’t detract from their power. “It definitely was more of a relatable song to our personal lives,” Rosé said in an interview with Amazon Music. “You Never Know” is a rare glimpse into the artists’ experiences facing criticism and coping with the pressures of fame as a top musical group with an international audience of millions.

Elsewhere on The Album, the diss tracks “Love to Hate Me” and “Pretty Savage” trade in a different type of candor. “Kinda sad that you always been like that/ See me making waves and you don’t like that,” Rosé sings in one verse of “Love to Hate Me;” “I’ma let you fade into the background/ Baby all my shows are gettin’ too loud,” sings Jisoo in another. These words—along with the line from the chorus, “you ain’t worth my love if you only love to hate me”— appear to be a cheeky response to those who express disapproval as the group rises. The sentiment is also present in “Pretty Savage.” “Carpet is laid out the moment we appear/ Black to the Pink change it up whenever we want/ Your jealousy is the problem,” Jisoo says in a verse describing envy toward the act’s superstardom. And, in possibly the most inventive line on the album, Jennie raps: “If you get our names wrong get hit like ddu-du ddu-du”—smoothly referencing the group’s most-viewed, record-setting track to take a dig at the haters.

Of the eight tracks on The Album, three are entirely in English: “Bet You Wanna (feat. Cardi B),” “Crazy Over You” and “Love To Hate Me.” “Ice Cream (with Selena Gomez)” is mostly in English, save for one rap verse in Korean from Lisa. These tracks appear to be a natural progression for the group given BLACKPINK’s previous collaborations on bilingual projects like “Sour Candy” with Lady Gaga and “Kiss and Make Up” with Dua Lipa, as well as three of the members being fluent in English. But there’s no telling the next step in the ensemble’s linguistic direction. Every member has substantial verses in Korean throughout The Album, and some of the most piercing lines—such as Jennie’s “the brighter that light gets, the longer my shadow becomes” in “You Never Know”—are in that language. If anything, with the seamless transitions between Korean and English across the latest release, BLACKPINK members have further established themselves as comfortable bilingual performers capable of making hits regardless of the language.

A display of variety, musically and visually

What The Album lacks in cohesion—there is not quite an overarching theme tying the tracks together—it makes up for in variety. The eight songs offer an array of genres, which was signaled by the pre-release singles. The sound of the hip-hop leaning, hard-hitting “How You Like That” contrasts with that of the sugary, summery bubblegum pop of “Ice Cream.” Among the newly released numbers, the sonic variety ranges from the retro-styled, electro-pop “Lovesick Girls” to the dance-pop “Love to Hate Me” to the stripped-down “You Never Know,” where everything besides piano chords and vocals fades into the background.

Variety is also reflected in the visual presentation of The Album. The three music videos released for “How You Like That,” “Ice Cream” and “Lovesick Girls”—along with the “teaser posters” that have accompanied each—show the four artists in entirely different styling. A fashion highlight of “How You Like That” were the modernized, black- and pink-toned hanbok, or traditional Korean clothing. Meanwhile, “Ice Cream” boasts flashy colors in the forms of flowery crochet tops, hair accessories, and manicure designs—nail artist Park Eunkyung posted close-up photos of some of the elaborate looks. Unlike the themes of the earlier releases, “Lovesick Girls” features punk rock vibes as the artists perform in leather and denim jackets, and plenty of plaid. “We believe that fashion plays a very important role when expressing our music,” BLACKPINK told TIME in June for the release of “How You Like That.” “Our stylists are very involved in the album-making process with us.” For this release, Jisoo, Jennie, Rosé and Lisa successfully deliver versatility across both musical genres and aesthetics. If “black” represents a darker, edgier side of the four artists and “pink” represents a brighter, sweeter side, The Album serves up a colorful palette of not only the group’s trademark colors but also the spectrum of shades in between. 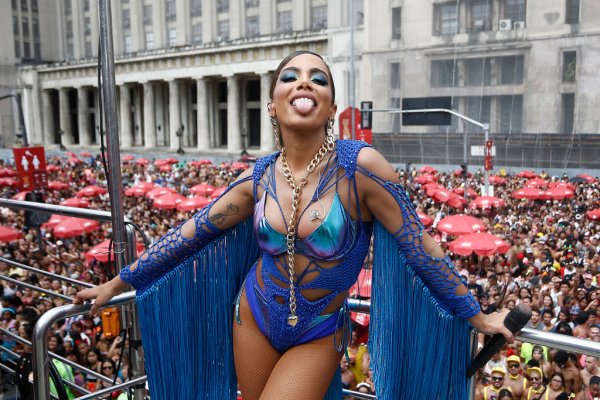 Anitta Doesn't Need the U.S. But Could She Make It Here Anyway?
Next Up: Editor's Pick