Typically, after a presidential debate, the top staffers and high-profile supporters of the nominees engage in one of the more absurd practices in modern politics: they “work the refs,” or try to shape the coverage by spinning the reporters who will write the first draft of that night’s history. But the pandemic nixxed the spin room for last night’s clash and sent us all dialing into post-debate conference calls.

During normal times, debates wrap up and volunteers march into the area where journalists have set up their workstations. These civic-minded neighbors — or children of VIP donors and super-activists as if often the case — are handed signs announcing the names of the designated campaign representatives. Reporters crowd around in a free-for-all and, depending on how they’re ping-ponging between campaigns, ask some variation of the same obvious question repeatedly to irked campaign hands who, in turn, dutifully repeat a variation of the talking point that theirs was the winning team.

Now, we press “one” on our touch screens to ask a question.

It was just a small reminder that what we all watched last night was like nothing I’ve ever seen or imagined. As much as the pandemic changed the footprint of the first presidential debate of the 2020 race, the incumbent shattered it. The evening tested my own understanding of “bananas.” President Donald Trump interrupted Vice President Joe Biden so often that I was waiting for the moderator, Fox News’ Chris Wallace, to threaten to turn this car around if the fighting didn’t stop. Trump was indifferent to the facts and still pressed forward as though nothing mattered.

It was a shock to witness just how far expectations and scandal have moved the norms of debate. I remember in 2004 when an ill-steamed jacket gave conspiracy theorists permission to allege President George W. Bush was wearing a wireless transmitter and being fed answers during one debate. Last night, the President of the United States was telling white supremacist groups to “stand by” if the results from Nov. 3 aren’t to Trump’s liking. This wasn’t an evolution of debates. It was a mutation.

But at least one thing remains the same: reporters still get to ask the big question of these campaign reps. And there was one enormous query hanging in the air after last a night in which Trump was so belligerent that Biden eventually called the sitting President a “clown.” Three times on the post-debate call with the Biden team reporters brought the most obvious question: Will the former V.P., a man who so tries to follow the rules of the game that he cut himself off for time during his primaries, put himself through that again?

“We are going to the debates, guys,” Biden’s exasperated deputy campaign manager Kate Bedingfield told reporters in the 11 p.m. hour. But, when asked why the campaign would agree to another three hours of such a debacle, she said “those conversations are always ongoing” with debate organizers about remedies for continued bellicosity from Trump. By midday Wednesday, the debate organizers publicly acknowledged the need for better guardrails against Trump’s scofflaw treatment of the rules. No details were immediately available but it was clear that a repeat of the night before was not an option.

Very little of the on-stage exercise determines any part of what the American people ultimately render as their verdict on the debate’s winner. The off-stage spin probably matters even less. But there are cornerstones to what campaigns should feel like. This wasn’t it. Trump repeatedly spoke over Biden, made assertions designed to cut deep personally for Biden and generally commandeered the conversation with innuendo, falsehoods and conspiracy theories.

Biden, during debate prep, practiced what to confront in the moment and what to trust to the fact-checkers later. Biden was judicious in his use of real-time rulings, not wanting to miss the opportunity to make the affirmative case for a Biden presidency by spending all of his time setting the record straight. Trump tried for the opposite tactic, seemingly determined to bulldoze Biden from the start.

It was, in the words of CNN’s Jake Tapper, “a hot mess inside a dumpster fire inside a train wreck… That was the worst debate I have ever seen, in fact it wasn’t even a debate. It was a disgrace.”

Biden’s allies did nothing to refute that what had just transpired was pretty terrible. Instead, Biden’s press secretary, T.J. Ducklo, deployed some of his dry gallows humor as he wrapped up the spin call with reporters as the clock ticked toward midnight. “Sorry we can’t see you in person,” he said, before a quick turn. “Maybe not that sorry.” 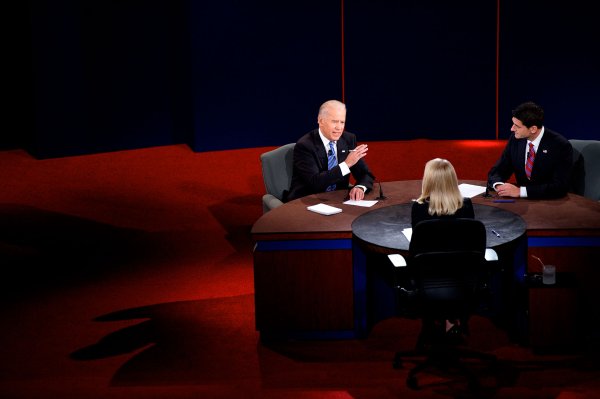 Biden Can Be a Better Debater Than Trump Realizes
Next Up: Editor's Pick