If Americans were hoping to get some reassurance, clarity, or even hope from this year’s presidential candidates about how the U.S. will make it through the coronavirus pandemic, then Tuesday night’s first debate fell woefully short.

During the 15-minute segment dedicated to COVID-19—which is still killing hundreds of Americans each day, and stands to worsen once again—neither President Donald Trump nor Former Vice President Joe Biden provided any substantive plans for what health experts say will be a critical next few months, and possibly years, in the fight against the coronavirus. Instead of thoughtful plans for addressing the deadliest and most disruptive public health crisis the world has faced in a century, viewers got a mud-slinging brawl between two candidates who were mostly more interested in landing jabs than in providing any reassurance to an already edgy public reeling from lost loved ones, lost jobs and disrupted lives.

“Get out of the bunker, get out of the sand trap and get to the Oval Office and fund what needs to be done now to save lives,” Biden told Trump. “He does not have a plan,” Biden added, characterizing the White House’s oft-criticized response to the pandemic. He noted that while the U.S. accounts for only 4% of the world’s population, it has weathered 200,000 deaths from COVID-19—about 20% of the global total. “He’s been totally irresponsible in the way in which he handled social distancing and people wearing masks; basically encouraging them not to,” Biden said. “He’s a fool on masks.”

The Vice President went on to highlight revelations that Trump admitted to being aware of COVID-19’s danger in February, but downplayed the disease anyway—which the President said he did to avoid causing a panic. “He knew it was a deadly disease. What did he do? He’s on tape saying he didn’t want to panic the American people. You didn’t panic, he panicked,” Biden said.

Trump maintained that his decision to close travel from China into the U.S. at the beginning of the year saved lives. “If we had listened to you and left the country wide open, millions would have died,” he told Biden. “You could never have done the job we did; you don’t have it in your blood.”

The personal attacks and repeated interruptions from the candidates overshadowed any opportunity for voters to form a firm picture of how either Trump or Biden plan to navigate the remainder of this pandemic—not to mention the upcoming flu season, when the dangers of respiratory diseases like COVID-19 and flu circulate together. The next few months will also see critical results from the first potential coronavirus vaccines, but instead of explaining how we can ensure everyone who needs a shot receives one, Trump and Biden tussled over the Trump Administration’s constant conflict with scientists and public health experts and their differing views on how to safely reopen society. Trump also said he “disagreed” with his own experts who warn that any vaccine or vaccines won’t be widely available to the public until next year, and claimed that the vaccine makers can “go faster” but the process is “political.“

“Do you believe for a moment what he’s telling you in light of all the lies he’s told you on the whole issue relating to COVID?” Biden responded.

It’s hard to say what to make of the sparring that often devolved into name calling and accusations during a discussion that instead could have provided some glimmer of hope for a public desperate to know how, and when, this pandemic will finally end. For now, the victory—if there is even one to declare—goes to the virus itself, which thrives on exactly the kind of confusion and conflict Tuesday’s debate provided in spades. 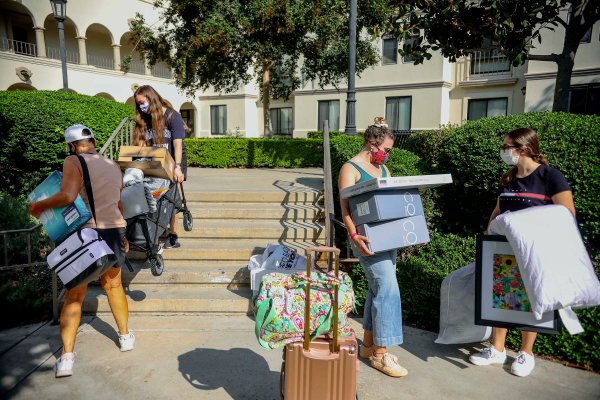 How to Reopen Colleges Safely During COVID-19
Next Up: Editor's Pick