Interruptions and Insults: All About the Very Uncivil Tone of the First Presidential Debate

The first Presidential debate between President Donald Trump and former Vice President Joe Biden may be better remembered for its antagonistic tone, and the din of the candidates talking over each other, than any policy discussion.

The candidates regularly attacked each other’s character, as Trump repeatedly interrupted and heckled Biden, who responded by calling the President a “clown” and telling him to “shut up.” Moderator Chris Wallace often failed to get the discussion back on track.

The debate was also marked by Trump refusing to disavow white supremacist groups and other right-wing organizations and attacking the integrity of mail-in voting, without evidence.

The hostile remarks began early in the night, when Wallace asked Biden if he supported ending the Senate filibuster or putting more than nine justices to the U.S. Supreme Court—as some progressives have urged. Biden avoided the question, responding, “Whatever position I take on that, that’ll become the issue. The issue is the American people should speak. You should go out and vote.” Trump immediately interrupted Biden, repeatedly asking, “Are you going to pack the court?” and “Who’s on your list, Joe?”

“Would you shut up, man?” Biden responded. “This is so unpresidential.” When Wallace announced the segment on the Supreme Court over, Biden retorted, “That was really a productive segment wasn’t it,” turning to Trump and saying, “Keep yapping, man.”

As Trump continued to aggressively interrupt his Democratic opponent throughout the night, Biden often responded by turning to the camera and addressing viewers as the President continued to speak over him.

At one point, Wallace asked the President: “I think the country would be better served if we allowed both people to speak with fewer interrupters, I’m appealing to you sir to do that.” When Trump said Biden needed to follow the debate rules, too, Wallace responded: “Well frankly you’ve been doing more interrupting.”

During one moment when Biden discussed COVID-19 reopening policies, Trump jabbed “tell that to Nancy Pelosi,” to which Biden responded, “Would he just shush for a minute?” Later in the evening, Wallace repeatedly asked Trump to “let him answer,” before telling Biden, “you get the final word.”

“It’s hard to get any word in with this clown,” Biden said, “excuse me, this person.”

When Biden referred to the military service of his son Beau, who died of cancer in 2015, Trump responded, “I don’t know Beau.” Trump then brought up Biden’s son Hunter, who was discharged from the Navy reserve in 2014 after failing a drug test. “My son, like a lot of people, like a lot people we know at home, had a drug problem,” Biden said in response. “He’s worked on it and I’m proud of it.”

Trump also attacked Biden’s intelligence several points in the evening. “You graduated either the lowest or almost the lowest in your class,” the President said to the former Vice President. “Don’t ever use the word smart with me… there’s nothing smart about you Joe.”

“Oh give me a break,” Biden responded, scoffing at Trump’s attack—a common refrain from the former longtime Senator throughout the evening.

During a discussion of the explosive New York Times report that the President paid almost no federal income taxes for the past two decades, Biden pledged to eliminate the Trump Administration’s tax cuts for the wealthy and “make sure that we invest in the people who in fact need the help.”

“But why didn’t you do it in the last 25 year?” Trump responded.

“Because you weren’t screwing things up,” Biden said.

“No no—you were a Senator,” Trump retorted, to which Biden responded, “you were the worst president America’s ever had. Come on.” 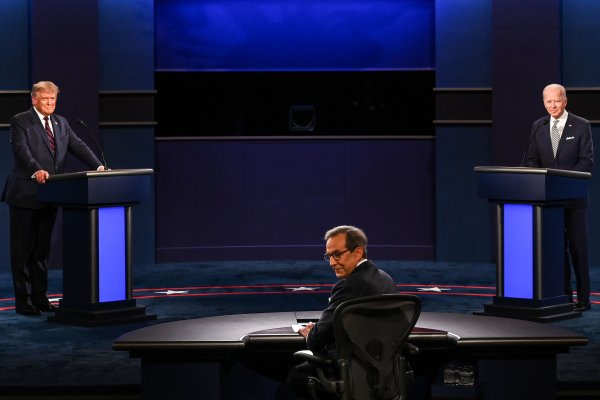 How the 1st Presidential Debate Devolved Into Chaos
Next Up: Editor's Pick