'It's a Very Unusual Situation.' What the Motion to Release the Breonna Taylor Grand Jury Records Says About the Case

People gather at the Breonna Taylor memorial in Jefferson Square Park as they prepare to march for the third day since the release of the grand jury report, on Sept. 26, 2020 in Louisville, Ky.
Michael M. Santiago—Getty Images
By Josiah Bates

Breonna Taylor’s death in March was already a devastating anomaly. Even in a year marked by several high-profile killings of Black Americans by police officers, her case has stood out for both its circumstances and for the widespread public outcry it provoked, as people across the country called for the arrest of the officers involved. With Kentucky Attorney General Daniel Cameron expected to release records from the grand jury deliberations, the case is getting even more unusual.

The planned release of the proceedings comes after an unnamed juror filed a motion on Monday accusing Cameron of using the grand jury to deflect from his own responsibility in the indictment decisions. Though the Attorney General had planned to release the recordings to the court on Wednesday, his office on Tuesday asked for a one-week extension in order to finish redacting private information from the recording. In a statement sent to TIME, Cameron’s office said the judge ruled on the motion and gave them until noon Friday.

“The Grand Jury audio recording is more than 20 hours long, and our office filed a motion to request additional time to redact personally identifiable information of witnesses, including addresses and phone numbers,” the statement said.

Whenever the release comes, it will mark a departure from usual legal proceedings—and illuminate another reason Taylor’s case is drawing calls for reform.

Typically, grand jury deliberations are kept secret from the public, and grand jurors must protect that secrecy. A prosecutor is supposed to bring all the evidence to the grand jury, so the jurors can decide if there is enough to indict the defendant. The secrecy protects the would-be defendant in situations where no charges result; in most cases, a grand jury will bring some charge against a defendant, but very rarely are police charged with homicide.

But in the motion in the Breonna Taylor case, the juror requested the release of the transcripts and recordings as well as permission from a judge to speak publicly about the case.

Kevin Glogower, an attorney representing the juror who filed the motion, said his client felt compelled to take action and believed that Cameron did not fully communicate the position of the grand jury when he announced Sept. 23 that, while one officer, Brett Hankison, would be charged with wanton endangerment for shooting into nearby apartments, none of the officers involved would face charges directly related to Taylor’s death. Protesters quickly took to the streets in response to the news. On Monday, Hankison pleaded not guilty.

“I can tell you my client has an issue with the levels of accountability and disclosures that have happened to this point,” Glogower said at a Tuesday press conference. “The primary concern that our client has is if you watched the press conference after the reading of the indictment, the Attorney General laid a lot of responsibility at the grand jurors’ feet.”

During Hankison’s arraignment on Monday, a judge ordered the grand jury proceedings to be included in the court files for the trial. The Attorney General’s office agreed to release the records and granted the juror permission to speak publicly. However, the juror is, according to his or her lawyer, waiting for the court to confirm he or she is allowed to speak out.

According to legal experts, while grand jury records do sometimes get released, it’s very rare for a juror to file a motion like the one seen in the Breonna Taylor case.

Margulies says this turn of events makes circumstances around the case look “problematic”—after all, this is clear evidence that someone who did have an inside view of the circumstances behind the indictment decision thought something was off—and that the motion could potentially lead to calls for a prosecutor other than Cameron to oversee the case.

“If it turns out that the Attorney General has misrepresented the way the proceedings were conducted then it delegitimizes the process and casts doubt on the determination not to charge the other two officers,” Professor Margulies says.

Sam Aguiar, an attorney for the Taylor family, said that the public, along with the family, deserves to see what was presented to the grand jury. He also accused Cameron of not being objective.

“It’s made clear by the filing that they [the grand jury] feel like they were betrayed. They feel like Cameron used them as a scapegoat,” Aguiar tells TIME. “This is a situation where the AG made up his own mind and that he was not going to allow the grand jury to charge the officers.”

In an interview with WDRB-TV in Louisville on Tuesday, Cameron acknowledged that in fact he did not give the grand jury the option to charge the officers with murder or with any lesser charge directly related to Breonna Taylor’s death, as his office believed that the only charge they would be able to prove in a trial was one of wanton endangerment. Cameron previously said he has no problem with the grand jurors speaking out and the transcripts being shared publicly.

But those who have turned the case into a flashpoint in the fight for racial justice are taking a much less matter-of-fact approach to what the transcripts and recordings may reveal. Some say this case is a prime example of why calls for reform should extend not just to policing, but also to the practices of prosecutors.

“You have a situation where one individual controls the access and flow of information. The grand jury only gets what the prosecutor decides to give them,” says Howard Henderson, the director of the Center for Justice Research at Texas Southern University. “That’s dangerous because it lends itself to misconduct, corruption and it’s very difficult to check.”

Henderson also argues that because prosecutors and police work often work together, the system is not set up to support true independence and transparency.

“The police and prosecutors work hand-in-hand so how is one going to prosecute the other?” Henderson says. “Part of the reason police aren’t held accountable is because prosecutors don’t hold them accountable. Prosecutors are not accountable to anybody. Who’s watching them?” 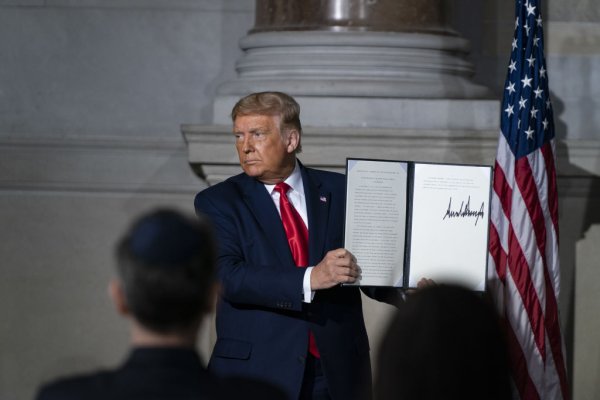 What Is Critical Race Theory?
Next Up: Editor's Pick