TikTok or Not, Gen-Z Voters Are Mobilizing to Show Up on Election Day

The TikTok logo is displayed in front of a TikTok office in Culver City, California, on August 27, 2020.
Mario Tama—Getty Images
By Mariah Espada

First-time voter Elise Joshi joined TikTok about a month ago to help get the word out about climate change. But it was her video that landed on the app’s “For You” page about why she’d be “happily voting for Joe Biden” in November that racked up more than 500,000 views.

This year probably wasn’t what Joshi grew up thinking things would look like when she was 18. She’s navigating her first semester of college at University of California, Berkeley, while wildfires surround her home in Northern California. Then there’s the global pandemic, and protests over racial injustice continuing across the nation. But, she says, she couldn’t think of a better election to vote in for the first time.

“I feel like you always remember the first time you vote,” Joshi says. “This is the most influential election of our lifetime because it determines the next century.”

Joshi is one of 15 million young Americans that have turned 18 since 2016, a major voting block in this year’s electorate. A recent Harvard Youth Poll found that younger voters’ traditionally low turnout may be different this fall: 63% of its respondents, aged 18-29, said they would “definitely be voting,” compared to 47% in 2016.

For many of them, like Joshi, TikTok has become an integral part of that experience. During this crisis-filled year, TikTok has emerged as a space where millions of Gen Zers have turned to take their political activism across the political spectrum. Since being launched in the U.S. in 2016, the platform now has over 100 million active users in the country. Between January 2018 and August 2020, it’s use went up an astronomical 800%. One media analyst called it the “winning social network of the pandemic,” as young creators have broadened its landscape to dance videos, short skits and most recently, a platform to rally on ahead of the November election.

Then Trump called it all off — or tried to. In August, Trump signed an executive order to ban TikTok due to data security concerns over the Chinese-owned app. TikTok has since sued Trump and filed for an injunction to stop the potential removal of its product from U.S. app stores as they navigate a deal for Oracle to buy the app. For now, the platform is allowed to operate.

Many TikTok users were livid at the notion of Washington cutting them off from the platform. After Trump’s earlier threats to ban the app, TikTok activists flooded his campaign app with negative reviews, prompting Apple to reset the app’s star-rating.

But some progressive TikTok activists see Trump’s interference as an opportunity. “It’s kind of giving the middle finger to Gen-Z and taking away the one thing that brought them a lot of joy in the last six months,” says Colton Hess, creator of Tok The Vote, a progressive voter registration campaign with over 11 million hashtag views that is working to get 18 to 21 year olds on the platform registered to vote.

While the group isn’t “giving a lot of attention” to the Oracle-TikTok debacle, he says, it also recognizes the potential of the move to galvanize young users against the President. “It’s a cultural sensation. It’s how they talk to their friends, how they share laughs and experiences with their friends and express themselves,” he says. “We think that there’s no better way to mobilize Gen Z to get out to the polls than to ban TikTok, frankly.”

Hess isn’t the first one to recognize the potential influence of progressive young TikTik users in the 2020 race; their impact has already gone far beyond their own screens. Before taking to Apple to sabotage the Trump campaign app, TikTok users trying to disrupt Trump’s re-election effort encouraged each other to buy tickets to the President’s rally in Tulsa, Oklahoma, and not show up. Before the rally, campaign organizers crowed about a huge expected turnout. In the end, only 6,200 people attended, reportedly horrifying the President.

Young conservatives, who are also extremely active on the app, have been more forgiving of Trump’s threat to ban their favorite app. Liam Rafizadeh, 20, started Today Is America, a coalition of popular TikTok pages that “presents a conservative viewpoint that appeals to the youth of America.” Their most popular page @TheRepublicanHypeHouse has nearly 900 thousand followers and 27 million likes.

Even with the large following, Rafizadeh isn’t afraid of TikTok disappearing and doesn’t believe it will change the majority of Gen Z’s vote if it did. “We support the President and any decision he makes against the app. I don’t care that we have a large following on TikTok, that’s just a number to me… If China can take this data wherever they want, you can manipulate a whole population with that,” he says.

Despite security concerns, politically active TikTok users from both sides of the aisle stay on the app because of its algorithm’s ability to turn users into overnight sensations. And as traditional “influencers” wrestle for engagement on oversaturated apps like Instagram and Facebook, many of them have shifted their content creator focus towards TikTok.

Those relative newcomers were also “very vocal about their outrage about Trump’s action towards TikTok as a platform,” says Elma Beganovich of digital marketing agency A&E. “It definitely mobilized the influencers to be very vocally anti-Trump because you know somebody is jeopardizing your livelihood.”

With TikTok’s future for U.S. users remaining uncertain, and its largest user demographic navigating their own murky futures, Gen Z is more motivated than ever to play a role in what they already see as the election of their lifetime. As Hess puts it: “I think young people hold the keys to the White House.” 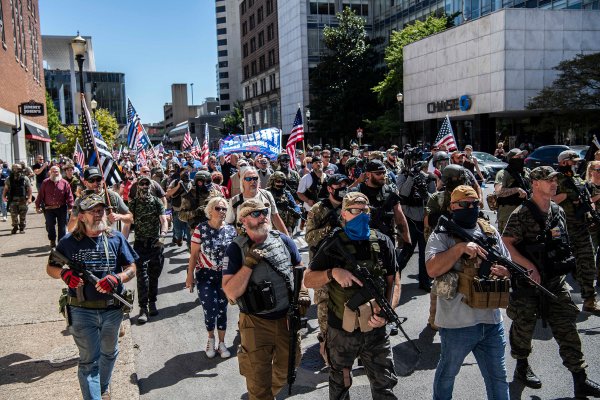 ‘Plan for the Worst and Hope for the Best.' Why Law Enforcement Officials Are Worried About Post-Election Violence
Next Up: Editor's Pick