Teens, TikTok Users and K-Pop Fans Might Have Tricked Trump Into Expecting a Huge Turnout for His Widely-Hyped Tulsa Rally

President Donald Trump arrives on stage to speak at a campaign rally at the BOK Center, on June 20, 2020, in Tulsa, Okla.
Evan Vucci—AP
By Tara Law

President Donald Trump’s campaign geared up for a massive crowd at his Tulsa, Okla., rally on Saturday and things don’t seem to have turned out as planned. While many factors, including a recent spike in coronavirus cases within the state, might have actually led to the event’s sparse turnout, many suggest that young people could be behind the overstated hype.

Since the rally’s announcement on June 10, the campaign had promised a huge turnout. Trump’s campaign manager Brad Parscale tweeted last week that more than 1 million people had requested tickets for the event, which had initially been planned for Juneteenth and rescheduled after a swift backlash.

Anticipating an overflowing crowd, the campaign had even prepared a stage outside Tulsa’s BOK Center where the President could address supporters. President Donald Trump himself had said earlier in the week that he expected a “record-setting crowd” despite the threat of the COVID-19 pandemic.

“We’ve never had an empty seat, and we certainly won’t in Oklahoma,” said Trump.

But ultimately, the turnout did not stand up to the campaign’s expectations. The outdoor events did not materialize, presumably as it became clear that there weren’t even enough supporters to fill all of the empty seats in the arena, let alone a sizable overflowing crowd. A Tulsa Fire Department spokesperson told Forbes that only 6,200 people attended the rally — less than half the venue’s 19,200 seating capacity.

After the rally, Parscale claimed that “radical protesters” had blocked Trump supporters from entering the venue. However, police officers on-site told the LA Times that the entryway had not been blocked for long, and that no one had been prevented from entering the space.

Although clear evidence does not yet exist for why the campaign’s expectations did not square with the lackluster attendance, some reports said that there might have been an unlikely culprit: an alliance of teenagers on TikTok and fans of Korean pop music.

After Parscale wrote on Twitter that protesters had interfered with the rally, Rep. Alexandria Ocasio-Cortez, (D-NY) interjected that teens had led the effort.

“Actually you just got ROCKED by teens on TikTok who flooded the Trump campaign w/ fake ticket reservations & tricked you into believing a million people wanted your white supremacist open mic enough to pack an arena during COVID Shout out to Zoomers. Y’all make me so proud,” Ocasio-Cortez wrote, adding that K-pop fans had contributed.

Ocasio-Cortez isn’t the only one who believes the disparity between expectation and reality of the event was orchestrated by young people. Reporting in the New York Times and on CNN suggest that social media users marshaled a campaign to reserve thousands of tickets for the rally — and then not show up.

It’s not just media reports either. Many parents alleged on Twitter that their children had also taken part in the collective action.

“My 16-year-old daughter and her friends in Park City, Utah, have hundreds of tickets. You have been rolled by America’s teens,” wrote Steve Schmidt, a veteran Republican strategist. “@realDonaldTrump you have been failed by your team. You have been deserted by your faithful. No one likes to root for the losing team.”

New York Times journalist C.J. Chivers said that two of his teenagers had taken part in the prank, tweeting that “one of them is sitting at dinner now, laughing and saying teens around the United States fooled the man.”

Additionally, at least a few parents around the world claim that it was not limited to the U.S.

Brad Parscale denied that a rogue social media campaign had an impact on the RSVP numbers for the rally in a statement to TIME.

“These phony ticket requests never factor into our thinking,” Parscale said. “What makes this lame attempt at hacking our events even more foolish is the fact that every rally is general admission – entry is on a first-come-first-served basis and prior registration is not required. The fact is that a week’s worth of the fake news media warning people away from the rally because of COVID and protestors, coupled with recent images of American cities on fire, had a real impact on people bringing their families and children to the rally.”

The campaign also appeared to threaten to stop credentialing media who report on events. 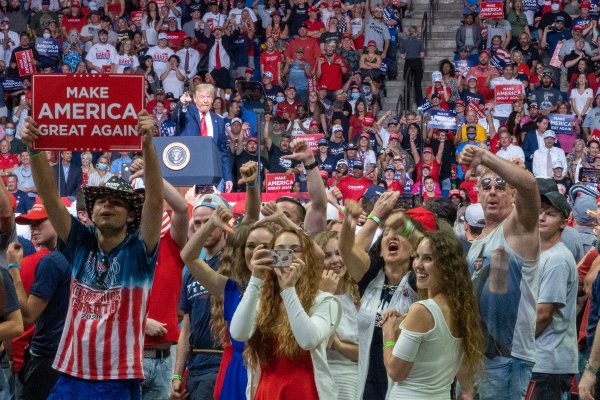 Trump Attempts a Revival in Tulsa
Next Up: Editor's Pick