The TikTok-tivists are at it again.

Thousands of users of the popular video app flocked to the Apple App Store in the last few days to flood U.S. President Donald Trump’s 2020 campaign app with negative reviews. On Wednesday alone 700 negative reviews were left on the Official Trump 2020 app and 26 positive ones, according to tracking firm Sensor Tower.

TikTok fans are retaliating for Trump’s threats of banning the app, which is owned by China’s Bytedance Ltd. and is hugely popular in the U.S., especially among teens. The thought of taking away a key social and entertainment hub in the midst of the Covid-19 pandemic has led to outrage.

“For Gen Z and Millennials, TikTok is our clubhouse and Trump threatened it,” said Yori Blacc, a 19-year-old TikTok user in California who joined in the app protest. “If you’re going to mess with us, we will mess with you.”

Blacc said the movement gained steam Wednesday when a popular TikTok user, DeJuan Booker, called on his 750,000 followers to seek revenge. He posted a step-by-step primer on how to degrade the app’s rating, notching 5.6 million views. “Gen Z don’t go down without a fight,” said Booker, who goes by @unusualbeing on TikTok. “Let’s go to war.”

The efforts to push the app low enough so that Apple will remove it from the app store may be misguided. Apple doesn’t delete apps based on their popularity. The App Store may review those that violate its guidelines or are outdated, but not if their ratings sink. A similar tactic was tried in April to protest Google Classroom by kids frustrated with quarantine home-schooling.

But young people are looking for ways to make their voices heard, even if some of them can’t yet vote. Last month, many young people organized through TikTok to sign up to attend Trump’s first post-shutdown campaign rally in Tulsa, Oklahoma, but then didn’t show up. The Trump campaign denied the online organizing effort contributed to lower-than-expected attendance.

The Trump campaign and Apple didn’t immediately respond to a request for comment. TikTok was experiencing connectivity issues on Thursday, according to Downdector, which measures web traffic.

Trump’s re-election smartphone app is a big part of the president’s unrivaled digital operation and was meant to circumvent tech companies like Facebook Inc. and Twitter Inc. and give the campaign a direct line to supporters. The app has helped the campaign engage Trump’s die-hard supporters, especially in the midst of the coronavirus pandemic, by feeding them his latest tweets and promoting virtual events. Supporters can donate to the president’s campaign or earn rewards for recruiting friends like VIP seats to rallies or photos with the president.

The Official Trump 2020 app has been downloaded more than 500,000 times on Google’s Android store as of June 15. Apple doesn’t publish information on downloads.

Reviews with titles such as “Terrible App” or “Do Not Download!” have been flooding the App Store since late June. Official Trump 2020 now has more than 103,000 one-star reviews for an overall rating of 1.2.

But the uptick of activity has also caused the app to rise in rankings. Users have to download the app to review it, vaulting it to second place on the Apple store from No. 486 on Tuesday, according to Sensor Tower.

“Do I think that this is going to fundamentally change the election? No,” said Tim Lim, a veteran Democratic digital strategist. “But it goes to show that they are just as susceptible to these mass actions as anyone else. Trump is starting to see what it feels like to have a massive online army committed to defeating him.”

Trump earlier this week said his administration is considering banning TikTok as one way to retaliate against China over its handling of the coronavirus. Trump’s comments came after Secretary of State Michael Pompeo told Americans not to download the app unless they want to see their private information fall into “the hands of the Chinese Communist Party.” Bytedance is also facing a U.S. national security review for its acquisition of startup Musical.ly. It has denied allegations that it poses a threat to U.S. national security.

Trump didn’t offer specifics about a potential decision and Pompeo seemed to walk back the idea of a ban in a later statement, saying that the U.S. efforts to protect American consumers’ data don’t relate to any one particular company.

Many TikTok users say they care less about potential Chinese snooping and more about Trump taking away their digital hangout. In the U.S., TikTok has been downloaded more than 165 million times, according to Sensor Tower.

“I don’t believe Trump is trying to take TikTok away because of national security, but more to retaliate against activism on the app and all the videos about him that drag him through the mud,” said Darius Jackson, an 18-year-old TikTok user in Champaign, Illinois, who asked his followers Wednesday to give Trump’s app a one-star rating.

“This is the first year I’ll be able to vote and I think activism on TikTok is going to make a big difference,” Jackson said.

—With assistance from Mark Gurman.

The original version of this story misstated the name of a city in Illinois. It is Champaign, not Champagne. 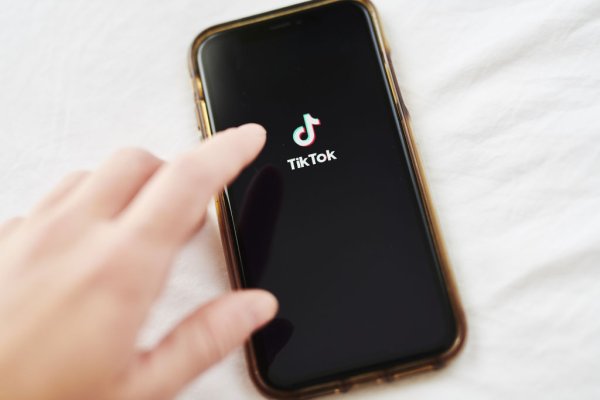 TikTok Pulls Out of Hong Kong
Next Up: Editor's Pick