As Washington Bids Farewell to Justice Ginsburg, the Capital Braces for Dark Days Ahead

The flag-draped casket of the late Associate Justice Ruth Bader Ginsburg lies in state in Statuary Hall of the US Capitol during a memorial service in her honor on Sept. 25, 2020.
Erin Schaff—Pool/Getty Images
By Philip Elliott

The morning was meant to be a celebration of the life of Justice Ruth Bader Ginsburg, a pioneer whose 27 years on the Supreme Court protected and expanded the rights of women, students, immigrants and Americans with special needs. A who’s-who of American political life sat in an ornate — and socially-distanced — passage of the Capitol this morning as the soprano Denyce Graves thundered through the marble halls with a lyric that seemed a fitting eulogy available to Ginsburg: “Let me know in my heart, when my days are through, America, America, I gave my best to you.”

But as Washington paid one last respect to the first woman and Jewish American to lie in state at the Capitol, there was also a deeper sorrow of sorts that settled on the city. As much as Ginsburg altered the country in life, her ceiling-shattering identity was about to run head-first into the limits of legacy.

The fight over Ginsburg’s successor has quickly brought civility in Washington — and in U.S. politics more widely — coasting toward a once-a-generation low. In a city so keen on pursuing and preserving power, that very commodity seemed to be short supply for almost everyone except the President. Insecurity of this magnitude often is to blame for mankind’s worst impulses. You could see the apprehension on the masked faces of the female members of Congress as they gathered on the east steps of the Capitol to be sentinels of sorts as Ginsburg’s casket left the Capitol for its eventual burial in Arlington National Cemetery.

The entirety of Washington, including the military, seemed to recognize things are about to take a turn for the coarse.

Senate Republicans were left stammering as President Donald Trump was on the eve of nominating Ginsburg’s successor, with a little more than five weeks before Election Day. The plan is to move ahead with a contested confirmation process immediately, despite the electoral backlash that lay in wait for some incumbent Republicans. Senate Majority Leader Mitch McConnell seems to have done the math and decided he can keep control of his chamber even if it means sacrificing Senators who contradict voters’ reluctance to move on a lifetime appointment so close to an election.

In more than a dozen polls conducted since Ginsburg’s death, there has been an overwhelming consensus that the winner on Nov. 3 should get to pick the nominee. McConnell, who will oversee the confirmation battle, is ignoring them.

Those same Republicans this week were forced to simultaneously defend the President’s power to nominate while criticizing his refusal to commit to a peaceful transition of power, a hallmark of American democracy dating to the election of 1800. McConnell, who was noticeably absent from Ginsburg’s memorial service, gave as firm a reprimand to Trump as we’ve in four years when he promised a peaceful transition, regardless of the upcoming election’s outcome.

Democrats, meanwhile, were in tangles trying to figure out how — if at all — they could throw up roadblocks to a nomination that could set off a massive realignment of power. Democratic rules changes in 2013 and Republican ones in 2017 effectively rendered any attempts at stalling the process moot. There’s very little that can be done to derail the confirmation if McConnell charges forward.

All of which spells some of the gnarliest political atmosphere as has been felt here since the Supreme Court stepped in to decide Bush v. Gore in late 2000. In conversations with grizzled veterans of the Capitol, there is a near-uniform recognition that past government shutdowns, war declarations and even Brett Kavanaugh’s highly controversial confirmation will have nothing on what’s about to come, in large part because it calls into question long-assumed rights, democratic expectations and more than a healthy dose of sheer political will that isn’t going to stop with administrative rulings. The court itself could countermand the voting that is already underway.

That’s right. A divided Supreme Court seems to be shaping up as an unwilling participant in this year’s presidential race, with Trump himself saying he’s counting on a conservative court — including his newest appointee — to step in to give him a second term.

Senators of both parties are uncomfortable with such a blatant disclosure of a political agenda. But as much as partisans gnashed about norms and precedents and constitutional powers, they also were unlikely to do, well, anything about it. As has been the case since he announced his candidacy in 2015, no one can snatch the spotlight from Trump. No forces can rewrite a script in this reality show of his making.

The only person not feeling helpless today is Trump himself, who is on the verge of outpacing his five most recent predecessors’ thumbprint on the court with a third nomination in just four years. He plans to introduce the country to the nominee tomorrow. And in the five weeks that follow, don’t expect a single person — other than Trump — to feel like they have full control over what they’re watching. 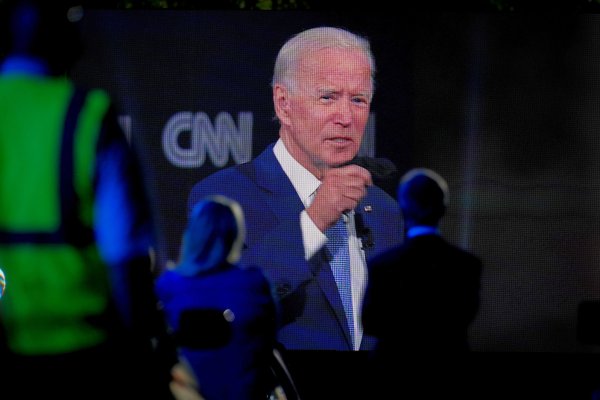 Younger Democrats Are Making Their Peace With a Biden Vote
Next Up: Editor's Pick