'Ideas Like That Are Toxic.' Why Democrats Are Split Over The Question Of Adding Two Justices To The Supreme Court

Even as House Speaker Nancy Pelosi promised that Democrats were willing to use “every arrow in our quiver” to prevent the Senate from confirming a replacement for the late Supreme Court Justice Ruth Bader Ginsburg, many mainstream Democrats were privately conceding that they have very little real procedural power.

The smarter strategy for blocking a nomination, they argue, is to win back the White House and Senate by reframing the battle over filling the vacant Supreme Court seat as a question of access to health care. Ginsburg’s absence, after all, makes health care issues—including the future of the Affordable Care Act and access to abortion—suddenly salient to tens of millions of voters.

“A lot of the campaigns were already debating healthcare. But the risks of people’s healthcare just went from a policy concern in a think tank to a clear and present danger for families across the country,” says Democratic strategist Jesse Ferguson. “It’s no longer theoretical. It’s now an actual threat.”

Progressive Democrats, meanwhile, are forcing a different conversation. They say that if Republicans confirm a new justice between now and January—and Democrats win the Senate and White House in November—then Democrats must use their new power to add more justices to the Supreme Court, a strategy known as “court packing.” Their argument is that even threatening to pack the court may give pause to centrist Republicans who might otherwise push to confirm a new justice, while simultaneously motivating the Democratic base.

“When Democrats control the Senate in the next Congress,” Massachusetts Senator Ed Markey tweeted shortly after Ginsburg’s death, “we must abolish the filibuster and expand the Supreme Court.”

But there’s the rub. Mainstream Democrats see the court-packing rhetoric as electoral suicide: it will, they argue, dissuade moderate and independent voters from voting blue in November. That kind of language benefits Republicans, says Republican donor Dan Eberhart. “It’s a gift,” he says. “Ideas like that are toxic to the very persuadable centrist voters both sides need.”

While both mainstream and progressive Democrats share the broader goal—to win in a landslide in November, in part by highlighting health care issues—the two camps’ strategies appear fundamentally at odds.

The majority of Democrats, including Presidential candidate Joe Biden, are squarely in the mainstream camp, arguing that Democrats’ electoral success lies in leveraging Americans’ anxiety over the current make-up of the Supreme Court by pointing at ways that a conservative bench might pass down rulings that negatively affect voters’ access to care.

A week after Election Day, the Supreme Court is scheduled to hear a case brought by a group of Republican Attorneys General, and backed by the Department of Justice, arguing the Affordable Care Act is unconstitutional. Democrats say that in Ginsburg’s absence, the chances of the court siding with the Republicans increases significantly, and that millions of Americans could lose health insurance in the midst of the coronavirus pandemic that has infected over six million.

“In the middle of the worst global health crisis in living memory, Donald Trump is at the Supreme Court trying to strip health coverage away from tens of millions of families and to strip away the peace of mind from more than 100 million people with pre-existing conditions,” Biden said in Philadelphia on Sunday in his first remarks on the vacancy. “If he succeeds, insurers could once again discriminate or drop coverage completely for people living with preexisting conditions like asthma, diabetes, and cancer. And perhaps, most cruelly of all, if Donald Trump has his way, complications from COVID-19, like lung scarring and heart damage, could become the next deniable pre-existing condition.”

In an Instagram live interview on CNN on Monday, Democratic vice presidential nominee Kamala Harris—who, as a sitting Senator, could theoretically cast a vote for Ginsburg’s replacement, depending on when it occurs—had a similar message. “This is just not about ideology,” she told CNN political analyst April Ryan, noting the upcoming legal challenges for the Affordable Care Act. “There are going to be real, significant, very tangible differences in terms of the life and well being of the American people based on who gets elected in November.”

Biden, who has previously said he opposed the idea of court-packing, didn’t touch the subject in his remarks on Sunday. On Monday, both Biden and Harris declined to answer questions about it. “Its a legitimate question, but let me tell you why I’m not going to answer that question – because it will shift the focus,” Biden said in a local television interview on Tuesday in Wisconsin when asked about the prospect. “That’s what [Trump] wants, he never talks about the issue at hand and he always tries to change the subject. Let’s say I answer that question, then the whole debates going to be about what Biden said or didn’t say … the question should be about why he about why he is moving in a direction that’s totally inconsistent with what [the] founders wanted.”

Campaigning on health care, Democratic strategists argue, is a tried-and-true strategy. In 2018, Democrats regained control of the House of Representatives largely by campaigning on protecting the Affordable Care Act, and 2020 has so far been similar. House Democratic incumbents and candidates have already spent a collective $30 million on television ads focused on health care this cycle.

Heath care issues tend to appeal not only to the Democratic base, but to independent voters and more moderate Republicans, particularly those who may have voted for Trump four years ago but subsequently soured on him. Internal polling from the Democratic Congressional Campaign Committee conducted this July and August in 57 congressional districts—41 of which voted for Trump in 2016—found messages on protecting people with preexisting conditions and cracking down on insurance companies to be most convincing.

Democratic strategists working on the most competitive Senate races, where Democratic candidates are running to unseat Republican incumbents, also argue that health care is a winning issue. “For Joni Ernst, Martha McSally, Steve Daines, the Affordable Care Act lawsuit is the last thing they want to talk about,” says one Democratic strategist working on Senate campaigns, referring to the incumbents in Iowa, Arizona and Montana. “If [Ginsburg’s replacement] is the deciding vote on repealing protections for preexisting conditions and Democrats can spend the next six weeks talking about it, then these folks are in a really big jam.”

Progressive Democrats, meanwhile, have been beating the court-packing drum. Massachusetts Rep. Joe Kennedy, who recently unsuccessfully challenged Markey in a Senate primary as a centrist alternative, echoed his former competitor’s call to expand the Supreme Court. “If [Senate Majority Leader Mitch McConnell] holds a vote in 2020, we pack the court in 2021,” Kennedy tweeted Saturday. “Its that simple.” Other Democrats, like Michigan Governor Jennifer Granholm and House Judiciary Chairman Jerrold Nadler, have come out with similar declarations.

Progressive activists, who have long called for sweeping judicial reform, welcomed these endorsements. “These are things professors and others have talked about for years in terms of fixing our democracy, ranging from ending the filibuster to expanding the court to abolishing the electoral college,” says Rebecca Katz, a Democratic progressive strategist. “These are not academic issues anymore.”

Senate Democrats have so far refused to take the issue of court-packing off the table. On a Sept. 19 phone call, Senate Minority Leader Chuck Schumer told his colleagues that if McConnell moved forward with a nomination and Democrats regain control of the White House and Senate, “nothing was off the table,” according to a source on the call.

Meanwhile, most mainstream Democrats appear to be quietly wishing that the court-packing discussion, which they see as potentially damaging, would just go away. “You’re never going to win having a process argument,” says the Democratic strategist working on Senate races. “Everyone knows someone living with a pre-existing condition. No one wants to sit down and have a process argument about the Supreme Court.”

A senior Democratic senate staffer, who requested anonymity to speak candidly, said focusing on court packing is simply galvanizing Republican voters. “It looks and sounds like exactly what [Republicans] are able to exercise their base about—rampant Democratic overreach on everything,” the staffer says. “Their base loves it and will eat it up.”

—With reporting by Lissandra Villa 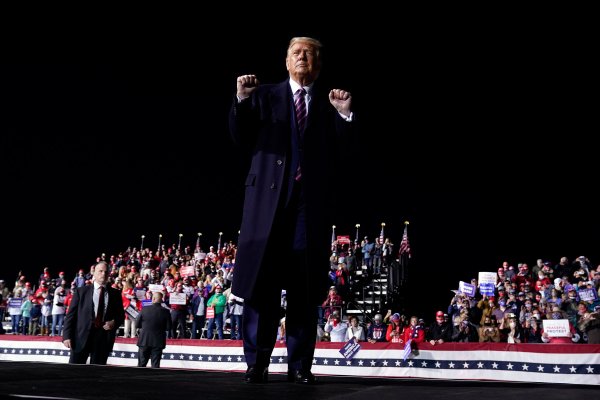 Why Donald Trump Thinks He Can Flip Minnesota
Next Up: Editor's Pick