If Kajillionaire Is Weighed Down by Stylistic Quirks, Gina Rodriguez Brings It Back Into the Realm of the Human

The movies of writer, filmmaker, actor, artist and raconteur of neurotic whimsy Miranda July all address variations on a theme: human beings’ longing for connection. Kajillionaire is July’s third feature—following Me and You and Everyone We Know (2005) and The Future (2011)—and it’s the best of the lot. July’s self-conscious awkwardness has become one of her most visible trademarks as a filmmaker, and like its predecessors, Kajillionaire moves to its own halting, jerky rhythm. But its thoughtfulness somehow shines through its heavy-duty stylistic quirks. And it has a breezier, more relaxed vibe than either of July’s earlier movies thanks to one glorious, effervescent performance: when Gina Rodriguez appears, she turns the picture around—it begins to truly breathe—and she carries it along straight to the end. If you see Kajillionaire for no other reason, see it for her.

Movie con artists tend to be a pretty happy-go-lucky bunch, but the clan of Los Angeles grifters in Kajillionaire are beyond miserable: they steal, trash-pick and stock up on freebies whenever possible, to the point that their lives are anything but carefree. For them, getting by on as little as possible, without a full-time job, is much more than a full-time job. The father, Robert (Richard Jenkins), slouching and crabby and dictatorial, is practically held together by his neuroses; he has strong feelings, in particular, about earthquakes, always on the lookout for “the big one.” The mother, Teresa (Debra Winger), slinks along at Robert’s side, her face nearly melting into her curtain of long, drab hair: she follows his lead and caters to his every whim. And their only child, 26-year-old Old Dolio (Evan Rachel Wood), appears to be following precisely in her mother’s footsteps, well on her way to disappearing behind her own slack mane of center-parted hair. The three live in an office space that definitely isn’t zoned for residential use—it’s adjacent to a bubble factory, and one of the conditions of their occupancy is that they wipe away the pink suds that drip down their walls several times a day.

That’s no life for anyone, not even dutiful, recessive Old Dolio. Her parents have taught her everything about stealing, and because she’s small and clever and reasonably attractive, she ends up doing most of the family’s dirty work: she’s well-versed in the art of stealing watches and then returning them to their owners, angling for a reward; she knows everything about dodging security cameras; her hands are small enough to maneuver packages out of other people’s post-office boxes. She has no life of her own and has no idea she deserves one; she’s her parents’ pawn, though she can’t see it.

And then, as the family executes a baggage-loss scheme (it involves persuading the intensely phobic Robert to board a plane for a quick round-trip to New York), they meet an intensely friendly, talkative shopping-mall optical-shop saleswoman with a Bedazzled cellphone and long, fake, talon-like nails. Her name is Melanie—she’s played by Rodriguez—and for inexplicable reasons, she becomes entranced by Robert and Teresa. Mid-flight, she helps calm their nerves by ordering up a few screwdrivers, and before you know it, they’ve spilled the beans about what they do for a living. Easy-going, always ready with a laugh, hardly judgmental, Melanie is the sort of person you’d confide all your secrets to. And Robert and Teresa, even in their drabness, seem exotic and exciting to her. She volunteers to help out with their bag-claim con, and then cooks up a few new ideas for fraudulence, happy to join their little gang.

Old Dolio—she was named after a street person who’d won the lottery, in the hopes that upon his death he’d leave all his money to the family, which he didn’t—wants nothing to do with Melanie and resents the attention her parents lavish on their new friend. But almost mystically, the tension between these two young women morphs into an intense and complex kinship that leads the movie into unexpected territory.

July—who doesn’t appear in this film, as she has in her previous two—puts her trademark squirrelly deadpan approach to work in Kajillionaire. Just as the novelty of it becomes tiresome, Rodriguez shows up, and the story becomes funnier and looser but also more meaningful. At one point Melanie and her partners in crime enter the house of an old man, intent on nabbing a check or two from his checkbook. But it turns out he’s very ill; he’s resting in his bedroom, waiting to die. Without seeing them, he calls out from his room, urging them to make themselves at home. He wants them to talk to each other, to go about the everyday things a family might do. He longs to hear the clink of silverware against plates, and the sound of someone practicing the piano. Old Dolio’s family obliges, playing at being a “real” family for the first time. The sequence has an unexpected, sideways poignance.

But the scenes between Wood and Rodriguez are best of all. Wood is a low-key, sensitive actress, and she makes you feel something for Old Dolio, unable to break free of her ultra-weird, manipulative family. Melanie’s brightness, the ease with which she moves through the world, is just what Old Dolio needs, and the tenderness between them feels wholly natural in a movie that is, for the most part, intentionally artificial. In some ways, Kajillionaire feels more like an art project than a movie; it works very hard at its quirkiness. But Rodriguez—perhaps best known from TV’s Jane the Virgin—both grounds it and lightens it. Melanie’s summery smile and her eagerness to have fun might mark her as shallow, yet she’s anything but. Rodriguez clues us in to Melanie’s perceptiveness—to the way she sees, almost immediately, that Old Dolio is drowning—with only the subtlest gestures. At one point, Melanie whips up some pancakes for Old Dolio’s breakfast, going to the extra trouble of making silver dollars instead of a single big one, which Old Dolio notes would be more logical. “Most happiness comes from little things,” Melanie tells her. And that’s just one of the little things Kajillionaire gets right. 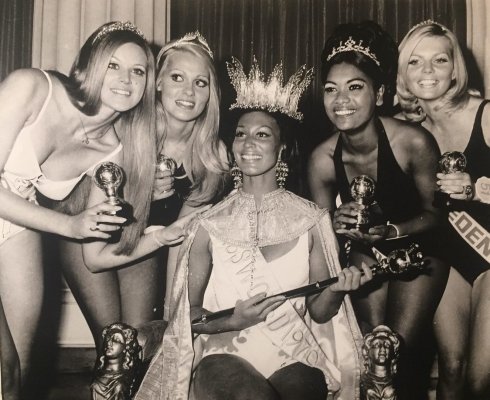 The First Black Miss World Looks Back on Her Tumultuous Win 50 Years Later
Next Up: Editor's Pick