‘People were like, “You’re just a little Latina actress. How are you going to be a director?”’ Gina Rodriguez, on getting her start directing
Rozette Rago for TIME
By Eliana Dockterman

“Are we planking?” Gina Rodriguez calls out on the set of Jane the Virgin. She leads a small group of crew members past a row of pastel-colored houses and into the bungalow that her character Jane has shared with her mother and grandmother for four seasons of television. Clad in sneakers and camo sweatpants, Rodriguez drops into a push-up position, sets a timer for one minute and yells out encouragement to the others during the ab exercise. When time is up, she makes a beeline for her director’s chair. This is just the third episode of television Rodriguez has ever directed, but she never pauses to second-guess a choice. She barely sits down before springing up again, hopping up and down as she watches the monitors.

Her Energizer Bunny–level exuberance is all the more impressive considering she recently wrapped two films–the action movie Miss Bala, out Feb. 1, and the upcoming comedy Someone Great–in between lending her voice to Netflix’s new reboot of the children’s show Carmen Sandiego (Jan. 18), directing an episode of the show Charmed and running her production company.

On this January morning, filming begins for the first episode of Jane the Virgin’s fifth and final season. Rodriguez will have to direct herself through some of Jane’s most emotionally wrenching scenes yet. The tears come easily: Rodriguez has been a “raw nerve” since the table read this morning, when she began to consider what it will mean to bid farewell to this brightly colored set where a tight-knit cast and crew fostered her rise.

She spots something on the monitors in front of her and jogs away, yelling, “I have an idea!” Her chair, now empty, reads I can and I will, an affirmation her father, a boxing referee, used to whisper in the ears of Rodriguez and her two sisters while they slept, hoping they would subconsciously absorb the wisdom. It’s a phrase Rodriguez repeats often, including in a 2015 Golden Globes acceptance speech for Best Actress in a Comedy that thrust her into the limelight. She even named her production company after it.

Back in 2014, Rodriguez was incredulous when executives at the CW network asked her to audition as the lead on Jane. “I was like, ‘They know I’m Puerto Rican, right? And they’re cool with that?'” she says. “I used to say I wasn’t pretty enough for the CW. Growing up without people who look like you on TV messes with your head.”

For the uninitiated, Jane the Virgin is loosely based on a Venezuelan telenovela about a virgin who is accidentally artificially inseminated. Jane decides to keep the baby, a choice complicated by the fact that her longtime boyfriend, an earnest police detective, is planning to propose. Meanwhile, the unintentional sperm donor turns out to be an old crush–a feckless millionaire with a heart of gold. She navigates the inevitable love triangle with the help of her mother and grandmother, a trinity of kind, powerful and complicated women.

The show is at once a self-aware spoof of and an unabashed love letter to telenovelas. To call it a “guilty pleasure” would be to minimize its genius: the series proved that a warmhearted heroine could be as complex and enthralling as the difficult men, like Mad Men’s Don Draper, who dominated prestige television when Jane premiered.

Behind the scenes as well, the show stood out from the rest of Hollywood. Showrunner Jennie Urman has a team of 10 women and three men for her writing staff. Four of the writers are Latinx, and women direct half the episodes. It was because of Urman that Rodriguez fulfilled her own dream to direct, after others had rebuffed her: “People were just like, ‘You’re just a little Latina actress. How are you going to be a director?'”

Though movements like Time’s Up (of which Rodriguez is an active member) are dedicated to addressing sexism and racism in Hollywood, Latina women still account for a mere 7% of all speaking roles in major films. Just one Latina director, Patricia Riggen, helmed one of the 1,200 top-grossing movies from 2007 to 2018, according to a recent study. Rodriguez says she is an activist first. On every project, she has demanded inclusion on a par with Jane the Virgin’s. “I refuse to enter a space where it’s not as liberating as this. Are 50% of the writers women? The directors? Are those women intersectional?” she says, referring to representation across race, class, sexual orientation and other aspects of a person’s identity. “No? O.K., let’s change that or find yourself someone else.”

After she finishes shooting scenes for the day, Rodriguez heads back to the couch in her dressing room, where she leans over to reveal a scar on her forehead. When she was 7, she explains, she was walking through her Chicago neighborhood selling Girl Scout cookies. While crossing the street, she slipped. “I get stabbed by one of the icicles under a car,” she says, “and my mother comes outside and lifts that motherf-cking car up.” Rodriguez was raised to believe that women are unstoppable, and throughout her career she has fought for more ambitious material. When she read for the lead in Miss Bala, which she was eager to accept when the studio confirmed that 95% of the cast and crew would be Latinx, she found herself making the same note repeatedly: “What would a man do in this situation?” She fought to execute every stunt that a male lead would. “You’re going to tell me that women aren’t strong enough? We suffer through pain one week a month and never complain. We pill it, plug it, keep it moving.”

A longtime boxer who spars on a punching bag in her dressing room between takes, Rodriguez harbors ambitions to become an action star. After lending her voice to Carmen Sandiego for the animated series, she pitched Netflix on a live-action version. “I want to rappel out of a helicopter,” she says. “Tom Cruise, what’s up?” But she waffles on whether she would really want action-hero-level stardom. As one of the most prominent Latinx actors in Hollywood, she often feels she’s expected to speak for an entire group. She’s proud to take on that role, but the backlash for even a perceived misstep can be brutal. Recently, when asked during a panel about the pay gap, she said Latina women are paid less than black or white women. And across all industries, the statistics say she’s correct. But some criticized her comments as unnecessarily comparing the plight of different minority groups. “When my words have been taken out of context and hurt others, it’s devastating,” she says through tears. “I never intend to hurt anyone. I feel their pain, and I empathize.”

In moments of stress, Urman encourages Rodriguez to “cocoon in her art.” So Rodriguez is concentrating on using her platform to create change. Her production company just sold a series to Disney’s new streaming service about a Latina girl who will grow up to be President. After all, it’s children, she argues, who are most affected by the lack of diversity onscreen. On a recent trip to Miami, a girl of about 10 approached the actor. “She’s Puerto Rican, and she’s very excited that I’m Puerto Rican,” Rodriguez recalls. “She goes, ‘Gina, I saw you at the Golden Globes. And, you know, no Latino actors won anything.'” In the four years since Rodriguez won her Globe, only two Latinx actors have won at the ceremony.

Rodriguez told her, “I’m working on it.” 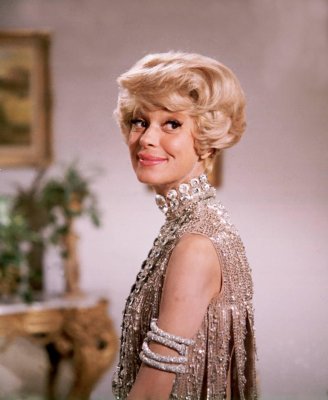