‘Plan for the Worst and Hope for the Best.' Why Law Enforcement Officials Are Worried About Post-Election Violence

Armed pro-trump militia members during a demonstartion on the day of the Kentucky Derby in Louisville, Ky., September 5, 2020.
Alex Lourie—Redux
By W.J. Hennigan

By refusing to pledge a peaceful transfer of power if he loses to Joe Biden in November, President Donald Trump is raising the stakes on an already contentious election by signaling how his supporters should respond if the vote doesn’t go their way.

“Well, we’re going to have to see what happens,” he said Wednesday in response to a reporter’s question about leaving office peaceably if he loses. The norm-breaking statement, which the President has reiterated since, has been dismissed as flippant by Republican allies, rather than threatening. But to many scholars and analysts who follow political violence, the president’s comments sound like a call to arms.

American cities are already on edge. Upset protesters have routinely taken to the streets this summer, facing off with police officers, federal agents and counter-protestors. Hours after the president spoke, for instance, there were violent clashes in Louisville, Ky., after a grand jury brought no charges for Breonna Taylor’s death. Two police officers were shot and wounded, 46 people were taken into custody and groups of right-wing militiamen were seen on the street clad in body armor and carrying assault rifles.

All political elections are combative, but the 2020 U.S. election has devolved into particularly hostile one. Democrats and Republicans alike have portrayed America’s choice in apocalyptic terms—one in which the rise of fascism or communism hangs in the balance for defining the nation’s future. And while only a fraction of ballots has been cast, each side is already accusing the other of conspiring to rig the outcome.

Politics is often said to be a long game. If a party loses an election, they move on and wait until the next one. But that attitude appears to be shifting in 2020, says Seth Jones, a former U.S. counterterrorism official now with the Center for Strategic and International Studies. Politicians, like Trump, cast their opponents as radicals who do not have the country’s best interests at heart, rendering them the enemy. Trump’s critics level the same accusation at him. “Even when a winner is declared, voters’ pent-up anger for the candidates will not go away,” Jones says.

That anger, combined with the rising threat of domestic extremists who are often aligned with the far-right and far-left, is a combustible mix. “The threat of political violence after an election has never been higher in modern American history,” Jones says. The 79 days between Election Day and Inauguration Day on Jan. 20, 2021 are the most worrisome, he says, and the highest chance for violence will come in the form of protests and gatherings about the election results. “People from all sides are coming to these protests armed,” he says.

Police departments in cities that have weathered months of protests are talking about what to do if the violence ratchets up after Election Day, particularly if the results are unclear, close or contested on and after Nov. 3. The nation’s military leaders are worried about being dragged into a post-election dispute by a President who has repeatedly aired his willingness to deploy federal forces to maintain “law and order.”

Members of an all black militia, march during a rally to protest the killing of Breonna Taylor, in Louisville, Kentucky on July 25, 2020.
Jeff Dean—AFP—Getty Images

On Aug. 3, an organization called the Transition Integrity Project brought together a group of more than 100 bipartisan experts for a table-top exercise to simulate what might happen after Election Day. The stated goals were to see how far candidates might go to contest negative electoral outcomes or disrupt the normal transition process; and how well would American institutions hold up if one or both candidates refused to play by the rules.

The electoral “war game,” which took place in June, had four scenarios: a clear Biden victory, a narrow Biden win, an unresolved outcome similar to the 2000 presidential election and a clear Trump victory. The results were messy in all scenarios. The project members, who included Michael Steele, former chairman of the Republican National Committee, and John Podesta, chairman of Hillary Clinton’s 2016 campaign, wrote that the two biggest threats were “lies about ‘voter fraud’ and escalating violence.” “The potential for violent conflict is high, particularly since Trump encourages his supporters to take up arms,” they wrote.

The most harmless scenario was a Biden outright win in the Electoral College and the popular vote, though Trump has since suggested he is so convinced voter fraud will be rampant that he thinks the election results will go to the Supreme Court.

Michael Caputo, who worked on Trump’s 2016 campaign, took a leave of absence from his job this month as public affairs adviser for the Department of Health and Human Services (HHS), after he said in a Sept. 13 Facebook Live video that violence was coming. “When Donald Trump refuses to stand down at the inauguration, the shooting will begin,” Caputo said. “If you carry guns, buy ammunition, ladies and gentlemen, because it’s going to be hard to get.”

The specter of using force and violence to keep office doesn’t happen in a vacuum. At a moment when the spread of conspiracy theories threatens to undermine the democratic process, counterterrorism experts are concerned that such calls could motivate armed right-wing and left-wing extremist groups.

Militia activity is on the rise and armed pro-Trump “patriot groups” have appeared at protests across the country, including in Louisville, Gettysburg and Portland. On Wednesday, news outlets The Guardian and Bellingcat published online chat logs of the Patriot Coalition of Oregon, a network of “pro-Trump, pro-police activists.” The leaked chats show deliberate planning for violence against liberal demonstrators on the streets of Portland. “More than anything, the chats catalog the rapid radicalization of Patriot Coalition’s membership, many of whom express a willingness to kill their perceived left-wing enemies,” according to the Bellingcat report.

An associate of the Proud Boys, a far-right group with a history of engaging in violent street clashes, flashes the once innocuous “OK” hand sign—now co-opted by white supremacists—at counter demonstrators during a rally in Portland, Ore., Aug. 22, 2020.
Rian Dundon

FBI Director Christopher Wray told the Senate Homeland Security Committee on Thursday that racially motivated extremism makes up the largest share of the FBI’s domestic terrorism cases—mainly inspired by white supremacist ideology. U.S. law enforcement officials have been warning for more than a decade that the threat from white-supremacist terror has grown.

Demonstrators calling for racial justice are increasingly being confronted by right-wing Trump supporters. On Aug. 25, 17-year-old Kyle Rittenhouse allegedly shot and killed two protestors in Kenosha, Wis. amid protests over the police shooting of Jacob Blake, a 29-year-old Black man. Four days later, Aaron “Jay” Danielson, 39, a supporter of the far-right group Patriot Prayer, was shot and killed while in a pro-Trump counter-protest in downtown Portland. When U.S. marshals killed Michael Forest Reinoehl, 48, a left-wing protester and suspect in Danielson’s death during the raid to arrest him, President Trump described the suspect’s death as “retribution.”

As demonstrations continue to rattle Portland on a nightly basis, city officials are also looking ahead to Election Day. Officer Derek Carmon, a Portland Police Bureau spokesman, says preparations for the elections are being made in accordance with other protests. “We put in as much planning in advance as we can, based on what we know,” he says. “Personnel, resources, and requests for assistance will be based on that information and we will manage protests, big or small, in the safest way possible, while allowing free speech to take place.”

In Minneapolis, where the protests after George Floyd’s murder raged for weeks, similar preparations are being made. “We are aware that this may be a flashpoint and have made appropriate plans,” Minneapolis police spokesman John Elder. “Remember: Plan for the worst and hope for the best.”

Trump has repeatedly said he’s willing to invoke the 213-year-old Insurrection Act, which could allow him to deploy military forces as he saw fit to put down violent protests, although not specifically for the election. The plain willingness to unleash military power on American citizens marked a provocative shift from the restraint that has characterized most previous American presidents’ postures toward quelling civil unrest. (The Act was last invoked in 1992 during the Los Angeles riots after Rodney King was beaten at the hands of police.)

In response, senior Pentagon officials have insisted the option to use active duty forces in a law enforcement role should only be used as a matter of last resort, and only in the most urgent and dire of situations. “In the event of a dispute over some aspect of the elections, by law, U.S. courts and the U.S. Congress are required to resolve any disputes, not the U.S. military. I foresee no role for the U.S. armed forces in this process,” wrote General Mark Milley, the chairman of the Joint Chiefs of Staff, in response to questions from House lawmakers released last month.

The U.S. military typically supports local authorities through the National Guard, which is under the control of state governors. The National Guard is usually called upon by state governors when there is a massive hurricane, earthquake or natural disaster. On occasion, members are sent across state lines to help out a neighbor if special skills or extra help is required.

But since late May, thousands of National Guard members have been activated to help state and local law enforcement across the country. “There’s no end in sight, as far as we can tell,” says Lieutenant General Marc Sasseville, vice chief of the National Guard Bureau. “There’s nothing in the system or nothing in society will stop any of that. And so, from a prudent planning perspective, we’re projecting that arc to continue for the foreseeable future.”

Sasseville says states are now strategizing together weeks and months ahead—just as they do for natural disasters—to ensure the National Guard forces will be available to protect people and property.

The fact the the U.S. is seriously facing the questions about political violence and military force to deal with fallout of the election is unfathomable, but the threat is real, says Oren Segal, vice president of the Center on Extremism at the AntiDefamation League.

“It’s dystopian,” he says. “This year has been unrelenting in so many ways and I fear it may even get worse by year’s end. There’s so much focus and attention on what’s going to happen on Nov. 3, Election Day. But to me, it’s really Nov. 4 that we should all be worried about.”

—With reporting by Brian Bennett 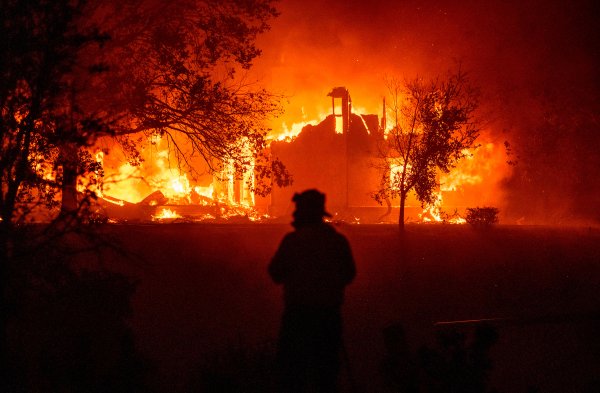 In Wildfire Zones, Voters Face Challenges
Next Up: Editor's Pick