Senate Republicans are including a repeal of the Affordable Care Act’s individual mandate in their pending tax reform plan — but it could complicate its chances of passing.

The GOP says that scrapping the provision, which forces people who do not purchase health coverage to pay a tax penalty, would be good for the middle and low income families they say they want to help under the tax plan. The change would also make it easier on Senate, which is trying to keep costs of the plan low in order to get the bill passed under a process known as reconciliation — repealing the mandate would save the federal government an estimated $338 billion. That’s a big deal considering they have to keep the cost of the plan, which includes changes to the individual tax rates and a corporate tax cut, under $1.5 trillion.

The stakes are high — Republicans are desperate for a big legislative win ahead of midterm elections — but in mixing health care and tax reform, two hot-button campaign promises, the Senate is taking a bit of a risk.

For starters, the Senate has already failed to pass health care reform this year. In opposing health care proposals when they came up, a handful of Republican Senators objected to the impact they would have had on health care costs. It appears the repeal of the individual mandate under the tax reform plan could have the same effect. The Congressional Budget Office and the Joint Committee on Taxation have estimated that while deficits would dip, premiums would increase by 10% throughout most of the next decade if the mandate is repealed though the markets would largely remain stable. In the first year, four million fewer people would be insured, according to the CBO, and 13 million people would be without insurance by the end of the decade.

“The people dropping coverage would generally be healthier than average so that would raise premiums for individual market coverage because the average cost to people in the individual market would now be higher,” says Matthew Fielder of the Brookings Institution.

Even if they opted out of buying insurance because they are relatively healthy, some of those newly uninsured people could still get sick. Without coverage, though, they might not be able to pay for the care they need when they go to the hospital. “That’s a situation where the rest of the health care system is now stuck holding the bag for those folks’ costs,” he says.

Repealing the individual mandate under the tax bill could also pose a challenge, Fielder says, because the savings wouldn’t be used to “clean up the mess that repealing the mandate would create in the insurance market.”

“Here, the savings from repealing the mandate are being used to finance tax cuts that will overwhelmingly flow to people at the top of the income distribution,” he says. “I, at least, find it hard to understand why that’s an attractive trade.”

Most Republicans do not like the mandate and they’ve tried to scrap it repeatedly. Americans aren’t huge fans of it either — some 6.5 million people opted to pay the penalty instead of getting insurance in 2016. On Capitol Hill on Wednesday, several Senators indicated they do not believe the individual mandate repeal would be a poison pill. “I don’t think that’s going to have an affect on people’s opinions,” Sen. Bob Corker of Tennessee said.

“It’s a tax on moderate to low income people,” said Sen. Lindsey Graham of South Carolina. “You’re making a person pay a tax when they’re not making a choice that you want them to make.”

Graham said though, that once the individual mandate is repealed, Republicans would need to do something about the Affordable Care Act.

“You could make an argument that Obamacare is falling of its own weight — until we repeal the individual mandate,” he said. “Then there is absolutely no excuse for us not to replace Obamacare because we’ve changed the fundamental principle of Obamacare. I hope every Republican knows that when you pass a repeal of the individual mandate it’s no longer their problem. It becomes your problem.”

Graham said a solution to that problem could come in the form of the health care proposal he and Sen. Bill Cassidy of Louisiana introduced earlier this fall. Sen. Lamar Alexander, a Republican from Tennessee, who worked on a bipartisan measure to address health care challenges with Democratic Sen. Patty Murray, said his bill also provides an opportunity. He said he and Senate leadership have discussed if that proposal, known as the Alexander-Murray plan, could be folded into an end-of-the-year spending plan. “If we pass the Alexander-Murray bill we will be able to go home and say we reduced premiums in 2018, we reduced premiums in 2019 and we’ve given states more flexibility,” Alexander said Wednesday.

Still, there is some skepticism among Republicans. Sen. Susan Collins of Maine, who cast one of the three deciding votes against this summer’s attempted “skinny repeal” of the Affordable Care Act, said that while she is not a fan of the individual mandate and wants to see tax reform passed, she thinks mixing the two in one plan complicates things.

“I believe taxes are too high. I believe the current codes creates disincentives for the creation of jobs and encourages jobs to be created overseas,” she said. “I think individual middle income Americans need a tax break and that all of that would help stimulate the economy. I think this bill is a mixture of some very good provisions and some provisions that I consider to be big mistakes.”

The Senate can only afford to lose two votes on the bill in order for it to get through the body under reconciliation, a process that only requires a simple majority to pass. So far, at least one Republican Senator has already indicated he’s a no — Ron Johnson of Wisconsin said Wednesday that he does not like how pass-through entities are treated in both the House and Senate versions of the bill and therefore cannot support them in their current form. Other key Senators, including Bob Corker and John McCain, have yet to explicitly say whether or not they will vote for the bill.

Any hopes of getting Democratic support seemed to fly out the window when the change was introduced. “This bill seems to get worse by the hour,” said Senator Ron Wyden, the Ranking Member of the Senate Finance Committee, said Wednesday.

Democratic Sen. Bob Casey of Pennsylvania called the tax reform process an “insult to the country” and the effort to include the repeal in the bill “destructive” on Wednesday afternoon.

“They’re slapping it on to the tax bill hoping that they can rush it through and no one will notice before we can get the word out that 13 million people will lose their health care,” he said.

“There could be an overlap between people losing their health care and people getting their tax increased in the same year from the same bill,” he added. “It’s terrible on the substance but the process is making it worse.” 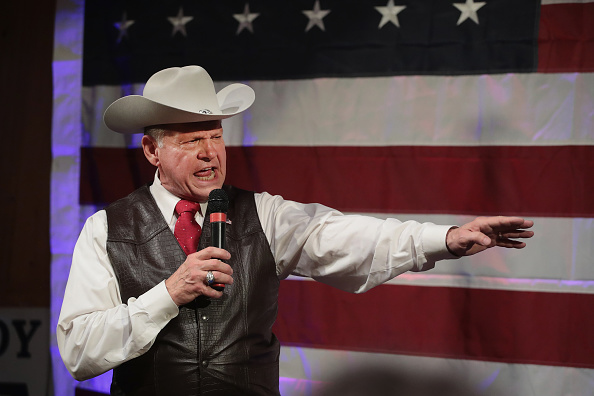 Will Roy Moore Still Win?
Next Up: Editor's Pick