Donald Trump Is Losing On An Issue Voters Care A Lot About. Here's How He's Trying to Change That

With nearly 200,000 Americans dead from COVID-19 and millions more who lost their health insurance when they lost their jobs this year, President Donald Trump tried this week—as he has done throughout his presidency—to change the conversation.

On Sunday, the President issued a new executive order aimed at lowering prescription drug prices, an issue dear to many voters, and boasted on Twitter that “prices are coming down FAST.”

The reality is more complicated. Trump’s new executive order, which revokes and replaces a different executive order on drug prices that he signed in July, directs the Secretary of Health and Human Services (HHS) to start testing how it would work to require Medicare to pay the same price for certain prescription drugs as other developed nations, which often pay less for the same medications. In a made-for-2020 twist, the order relies on the HHS secretary invoking an office established under the Affordable Care Act, the bête noire of the Trump Administration.

The President’s new order received immediate pushback from pharmaceutical companies, which will likely challenge it in court and delay any implementation for months or years. Health care experts agreed the order—and especially Trump’s repeated insistence that it will have an immediate impact on drug prices—was largely political posturing. “While this proposal isn’t too big, it is too late to get it done before the election,” says Tricia Neuman, executive director of the nonpartisan Kaiser Family Foundation’s program on Medicare policy.

But if it is all politics, it’s easy to see why Trump might think he needs to chalk up a win among voters who see health care as a top election issue. In a typical election year, health care stands among the most important priorities for voters; this year is similar. After health care was outranked by the economy and immigration in 2016, it rose in importance, and was often the number one issue in 2018. Among older voters, who make up a key segment of Trump’s base, health care has traditionally been a crucial topic.

The coronavirus pandemic has underscored those concerns. Since March, more than 40 million Americans have filed unemployment claims, leaving, experts estimate, as many as 27 million people without their employer-sponsored health insurance. More than 40 states have reported increases in opioid-related deaths in recent months, and older Americans, an important part of Trump’s base, are among the highest risk for severe illness from the coronavirus.

Trump has been trailing former Vice President Joe Biden in national polls for months, and voters’ trust in the President’s ability to handle the COVID-19 pandemic is still underwater, except among registered Republicans. The President has limited health care accomplishments to tout from his four years in office. Even aside from the pandemic, he has proposed cuts to Medicaid and Medicare, seen the rate of uninsured Americans rise, and supported a lawsuit to overturn the Affordable Care Act, which would wipe out health coverage for millions of Americans, without proposing a replacement.

During an ABC News town hall on Tuesday night, Trump promised to protect Americans with pre-existing conditions and swore that he’d release a new health-care plan soon—a vow he has repeated for years, although he has never produced a proposal. The White House chief of staff and press secretary repeated on Wednesday that Trump does have a health care plan on the way.

In the last three and half years, the Trump Administration has pushed to repeal the largely popular ACA and to curtail protections the law offers. It has, for example, refused to defend the law in court, expanded short term insurance policies that do not have to cover pre-existing conditions, limited open enrollment periods, and cut funds to help people sign up for marketplace plans.

Trump’s decision to redirect the conversation to lowering prescription drug prices—a 2016 Trump campaign promise—makes political sense. A recent poll by the nonpartisan Kaiser Family Foundation found that more registered voters say Biden has a better approach than Trump to almost all health care issues with the exception of lowering drug costs, where 46% said Trump had a better approach compared with 42% who favored Biden.

“I can’t think of anything that in this time will look good to people,” Robert Blendon, director of the Harvard Opinion Research Program and a professor of health policy and political analysis at the Harvard Chan School, says of Trump’s health care record. “But at least addressing the high drug prices—there is an anxiety about that.”

But, Blendon adds, the issue is likely to be less salient than it was in 2018, when Democrats successfully used health care as a top issue to help them capture the House of Representatives. Americans currently view the impact of COVID-19 through its immediate effect on their individual lives and are concerned about whether the government is doing the right thing for their jobs and schools, says Blendon, who has conducted polling on views of health care, the pandemic and the election. These worries have taken over the focus on health care reform that dominated the presidential election at the beginning of 2020. Still, he says, Trump is trying to tap into that personal fear with the new focus on lowering costs.

“It is an issue that can be very personalized and very emotional because there are a set of drugs that are incredibly expensive and they affect people where you emotionally can identify,” Blendon says. “He is trying to make this a personal thing.”

Trump has been making big promises about lowering drug prices for years, originally putting forward a plan in 2018 that focused on Medicare Part B drugs, or those administered in doctors’ offices. While his Administration started the rulemaking process at that time, it has not made much progress. In July, Trump said he would issue another order covering those same Medicare drugs, and now his new plan expands on that to include Medicare Part D drugs, or those people buy at pharmacies.

In the middle of all this, the Democratic-controlled House also passed a bill in December of 2019 that would have allowed HHS to negotiate prescription drug prices using other countries’ prices in a similar feature to Trump’s proposal. Republicans opposed the bill and Trump threatened to veto it.

In theory, the new executive order could have a big impact on expensive medications that many people rely on to manage conditions such as cancer, diabetes, multiple sclerosis and rheumatoid arthritis. But Rachel Sachs, a law professor at Washington University in St. Louis and an expert on drug policy, says Trump would have to skip a number of normal steps in what is usually a months-long process to even approach finalizing the regulations before the November election. This could open up the administration to additional legal challenges and still would not lead to lower prices immediately. “In the best case scenario,” she says, “it would still take quite some time to implement the model.”

And of course, if it were implemented, the change would only apply to those on Medicare. “Even if the proposed rule were to move forward rapidly and take effect, it would do nothing for people with private insurance or people who are uninsured,” says Kaiser’s Neuman. While older Americans are an important voting bloc, Trump also did well among voters ages 45 to 64 in 2016, and that’s a group that is also likely to struggle with the price of medications.

Democratic pollster Stanley Greenberg recently surveyed working class white voters in battleground states and found that Trump’s support among this group has continued to drop significantly from 2016. These voters, many in suburban and rural areas, have felt the squeeze of the pandemic-induced recession and often have complex medical problems. In 2016, one sixth of the electorate had a disability, according to Rutgers University researchers Lisa Schur and Douglas Kruse, and roughly one in four voters lived in a household with someone who has a disability. Nearly half of Americans regularly take prescription drugs, according to the CDC, and a growing number of people have chronic health conditions that require treatment.

As the election approaches, figuring out how to appeal to these struggling Americans will be key. Regardless of the political motive, the issue of health care costs is one that is deeply consequential to millions of households. “The problem is,” Blendon says, “to really have an impact in the middle of all that’s going on, he has to stick to it.” 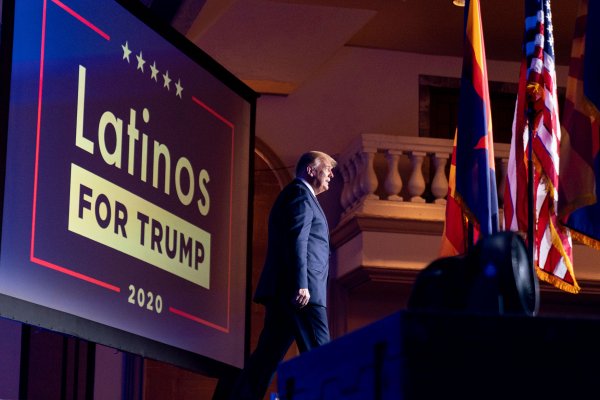 Why Donald Trump is Trying to Reach Latinos
Next Up: Editor's Pick