Three days after Justice Ruth Bader Ginsburg died, two women have emerged as the top contenders to become President Trump’s nominee for the feminist icon’s seat on the Supreme Court.

Trump said Monday that the selection process is down to a list of five names, and that he would nominate a woman to fill Ginsburg’s seat on the Court “probably” on Saturday. The mercurial President could still shift direction and select any woman from his previously released list of potential Supreme Court nominees. A White House official says Trump plans to interview five candidates.

The announcement will kick off a titanic confirmation battle that could have major ramifications for both Trump’s election prospects and the balance of power in the Senate. Republicans say the prospect of adding a third conservative judge to the Court during Trump’s term will energize their base, while Democrats are enraged by the GOP’s rush to fill Ginsburg’s seat in the final weeks before the election after stonewalling Merrick Garland, President Barack Obama’s nominee in March 2016, based on the claim that the seat should not be filled during an election year.

According to three sources familiar with the selection process, the task of vetting and choosing the judges on Trump’s short list is being run by White House Counsel Pat Cipollone and his deputy Kate Todd. White House Chief of Staff Mark Meadows is involved, as are Beth Williams, the head of the Office of Legal Policy at the Justice Department, and people in Senate Majority Leader Mitch McConnell’s office. A White House official says Todd, a former law clerk to Justice Clarence Thomas who was added to Trump’s Supreme Court shortlist earlier this month, is taking point on presenting the candidates to the President.

Barrett’s emergence as a finalist is no surprise. Trump considered Barrett for the open seat created by Justice Anthony Kennedy’s retirement in 2018, though he chose Brett Kavanaugh instead. The President interviewed Barrett during that time, a source familiar with that process confirms, and she has long been touted as a contender for a future seat. An Axios report last year quoted Trump as saying in private conversation that he was “saving her for Ginsburg.”

One benefit to choosing Barrett, the source says, is she is a known quantity, having gone through both the Supreme Court vetting process as well as a tough confirmation fight when she was confirmed to the Seventh Circuit in 2017. Senators are familiar with her and her record, which is “very helpful when you have what’s going to be a very truncated, very controversial process,” says the source.

That record won’t appeal to everyone. A former law professor at Notre Dame, Barrett is a devout Catholic whose published writings would come under great scrutiny if she were to be nominated. In 2013, she wrote that life begins at conception and that Supreme Court justices should overturn precedent that is “clearly in conflict” with their Constitutional views—which some observers interpret as a signal that she may be open to overturning the landmark abortion decision Roe v. Wade.

Barrett’s confirmation hearing for the Seventh Circuit seat in 2017 was contentious. “The dogma lives loudly within you,” Democratic Sen. Dianne Feinstein told Barrett during the hearing, prompting some Republicans to accuse Feinstein of imposing a religious test for a judicial nominee and the conservative base to rally around the nominee. (Barrett was ultimately confirmed by a vote of 55-43.)

Lagoa, on the other hand, was added to Trump’s Supreme Court short list less than two weeks ago. She’s less well-known than Barrett and has fewer relationships with key conservatives involved in the process. But she may also be less controversial. Lagoa was confirmed to her current seat on the Eleventh Circuit seat by a vote of 80-15 last year, earning a much wider margin in the Senate than Barrett. The Florida native and daughter of Cuban exiles was the first Hispanic woman to serve on the Florida Supreme Court, and supporters see this background as an asset in the key swing state if she is selected. (Former Vice President Joe Biden leads Trump by an average of 1.6 points in Florida, according to a RealClearPolitics polling average.) Lagoa has “courage” and “feistiness,” says a source familiar with the process. “I think the President will like her personality.”

On Monday, Trump said he would announce his choice “on Friday or Saturday,” noting he wants to “pay respect” to Ginsburg and wait for her services to be over before he unveils his pick. After Trump said that, House Speaker Nancy Pelosi announced that Ginsburg will lie in state at the Capitol on Friday, suggesting Trump will likely announce his choice over the weekend. 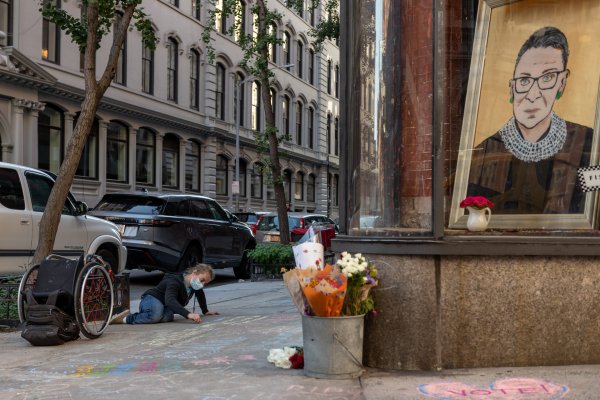